Ranger, Archer, Hunter. Three names for classes in three essentially different MMO’s, but when it boils down to it, they all do the same. Every MMO has one of these, a ranged damage dealer that does it’s thing with either a bow, crossbow or gun (or some of the more exotic weapons you can equip on GW2), sometimes has a pet and doesn’t cast spells. It’s the class that attracts me the most in any game. I “main” an Archer on the Phoenix server of Final Fantasy XIV, I have two high level Hunters on the World of Warcraft (and mained one for a period of time in Wrath of the Lich King and Cataclysm) and the character I’ve spent most time on in Guild Wars 2 has also been a Ranger.

Even though the differences between games are quite big I love the class in general and think I’m most comfortable playing a ranged dps. It even shows itself in a game like League of Legends where I prefer the role of AD carry, champions that stand from a distance and shoot! On Diablo 3 I also leveled a Demon Hunter but due to the group of friends that was I was playing with already having one I never “mained” it, instead I played a Monk because after Hunter my favourite class to play is some sort of Melee, on WoW and Guild Wars 2 it’s a Warrior, on FFXIV I haven’t really checked yet what I like.

Anyway back to the subject of me playing the “hunter” type class. I’m not really sure why it appeals to me so much. I like not being dependant on mana, even though WoW Hunters used to be but they had a very proficient system for regenerating this mana, and being able to auto attack while from a distance. It gives me a “safer” feel and I don’t have to worry about having to stand still to cast spells. Next to this for some reason I have always been able to get much more DPS out of my Hunter on WoW than I was able to with any of my other characters. On FFXIV I see the same with my Archer just being ridiculously damage-y compared to some of the other classes I’ve tried so far, the only thing I miss on the FF Archer is the fact that I don’t have a pet. I feel like it belongs to a Hunter type class but I guess you can’t have it all.
Next to this I think I also just like “uniqueness” of the class in most games. It’s a midway between playing an auto attack dependant melee character and a mana dependant spellcaster. Hunters are often also a bit more tanky than the squishy spellcasters so that they survive better when it comes down to it and in the case of World of Warcraft and Guild Wars 2 you have a companion on your travels in the form of a pet. The pet can act as tank aswell giving you an extra buffer of safety.

All in all a Hunter/Archer/Ranger just gives me a nice combination of things to make me feel like it’s my favourite class to play in any game. I’ve been levelling my Alliance Hunter (Aylanna) on the World of Warcraft again and gearing her up with some help of the Timeless Isle to see what I can do still on a Hunter before my sub runs out. Next to this I’m also still levelling my Archer on FFXIV and maybe when time allows it I’ll pick up my Ranger on GW2 aswell, for now though I’m still shooting with pointy things and enjoying myself immensly doing so! And I’ll leave you with a look at my three lovely ranged characters 🙂 Kassandri Nobre the Archer, Aylanna the Hunter(Cata screen, pre disallowing Hunters from having a Ranged and Melee weapon) and Vayne Redleaf the Ranger. 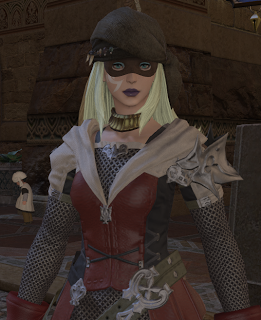