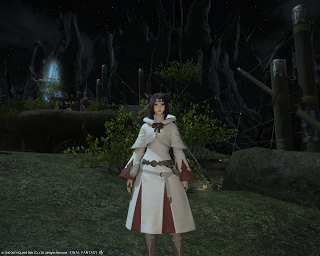 I made it! Level 50 White Mage. Late last night I finally dinged level 50. The last level actually went quite smooth. I had saved up my exploration and hunting log and by the time I had done those I had already done 380k out of the 530k experience needed to ding level 50. After catching up with my Main Story I managed to be 30k experience off of dinging so I picked up some random quests from the Scion’s Headquarters and delivered them and voila! There I was. Even though it was 2 am I decided I wanted to get the last job quest done so I could get my shiny Healer’s Robe, so I did and the above picture is the result of that!
What’s next?
Well for now I want to focus on finishing off my main story, so that’s doing the last few dungeons, and get my shiny 3rd mount, the Magitek Armor! After that I’m going to focus on getting geared so I can start doing endgame and next to that I will probably pick up professions a bit more again. I decided that I want to combine my professions a bit more, so I picked up Mining and Goldsmithing (I seriously lack good accessories) and am probably mostly going to focus on levelling them first.
Next to this I seriously need to find out what is expected of me on level 50, I read a lot of stuff about relic/pre-relic things, certain currencies you need (Allagan Tomestones?) and high level gear that you can buy and or make. I know that Healing Skill wise I should be fine, I haven’t had any complaints so far anyway, but that I need to pick a few more abilities from Arcanist and Thaumaturge to complete my skillset as White Mage so maybe I’ll focus on that a bit aswell.
Most importantly I’m going to kick back and be a bit more casual about the game now. The road to level 50 has consumed much time and I feel like I’ve spent most of my time on FFXIV while neglecting other things that I shouldn’t have. When I get a deeper understanding of the class I might write a guide about how to play a White Mage, but for now I’m going to enjoy being level 50 and afterwards we’ll see.