It’s been a while since I got the opportunity to blog. It’s been a very stressful month for me and I really couldn’t set my head to writing about it, I felt really down.

There are numerous things going on in my real life that I don’t specifically want to get into right now but let’s just say that my mood has been bad since early October and over the past few months it hasn’t really improved. I have to deal with a lot of stress from my internship and from not being able to see the man I love. It’s driving me insane and it’s making me really sad. Hence the lack of posting happy/usefull posts on here.

The reason I’m posting now is that a lot has happened in the 4-5 weeks I was away from here. I rerolled on WoW (again), hoping that this will be the last time tho, picked up Guild Wars 2 again and most importantly I came into the posession of a Playstation 4, fulfilling one of my wishes of owning one. 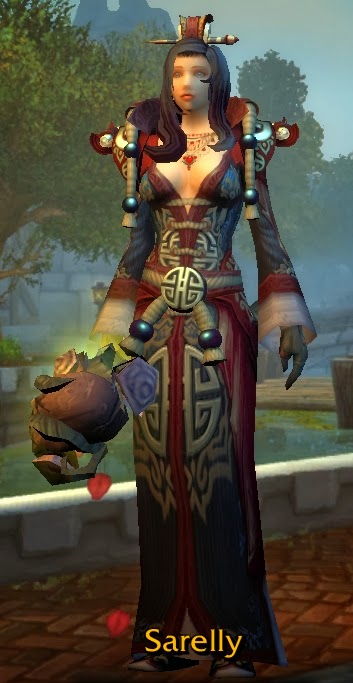 First off I’d like to introduce you to Sarelly, my priest. There was a lack of healers for my guild and I got tired of playing a Hunter pretty fast. Maybe I’ve played/levelled too many I don’t know but I settled onto a Holy Priest and am raiding on her now, and enjoying it deeply. To the left you see her in her old transmog, but she looks a bit different now.
I managed to get my hands on my old T6 set which I owned way back in TBC and am quite happy to use it as transmog for a while. Being back on a Holy priest has really lifted my spirits, I have a history of being Holy in TBC and WotLK and I basically quit being a healer since I got quite pressured by the last guild I was in to conform to their rules so I left my Priest behind, not wanting to play it anymore because of bad memories.
The cool thing I get to do on this Priest now is not only raid but I also stream the raids, which are currently only Flex. The raidtimes of my guild are Wednesday and Sunday from 20.00 till 23.00 and I usually have my stream on so if you feel like watching a tiny nubish guild raid you can hope over to: http://twitch.tv/sandrian and follow our progress!

Secondly I picked up Guild Wars 2 again. I’m not playing it much at the moment, just trying to squeeze in moments of playing it without me burning out on it (again). I’ve made a new character who is a Norn Thief and am playing with a few friends I met in my WoW guild and so far I’m having fun. We’re doing the quests and all of the exploring together and it relaxes me.

My tiny Miqo’te is also still going strong on FFXIV. I’m now a level 43 Monk and I plan to get her to 50 over the coming few weeks. Due to all my levelling in WoW, and gearing, and obtaining a PS4 I realized that FFXIV isn’t that high on my priority list anymore. I got the rank 4 veteran rewards for buying more gametime but I think I might take a hiatus once that runs out, which ironically should be around the time the Diablo III expansion comes out.

As for my PS4… I am absolutely in love with the system. I only have one game so far, Knack, but I’m enjoying it immensely. I’m trying to get all the trophies, achievement whore that I am, and am currently on 20/42. If you’re really fanatic (which I am) you can download an app for your iPhone or Android phone and play a minigame that’s similar to Candy Crush/Bejeweled that lets you win items you can send to your Knack game on the PS4! It’s really convenient and it’s gotten me to the point where I have almost all gadgets and am about to complete my first improved Knack form. Yay!

So that’s kind of what I’m up to. I am playing a bit more than what’s mentioned above but these are the most important things at the moment. If you’re really curious about what I’m playing, I made a little picture of all the games I’m currently investing time in. The only one that is lacking is World of Warcraft because I couldn’t find the box 🙁 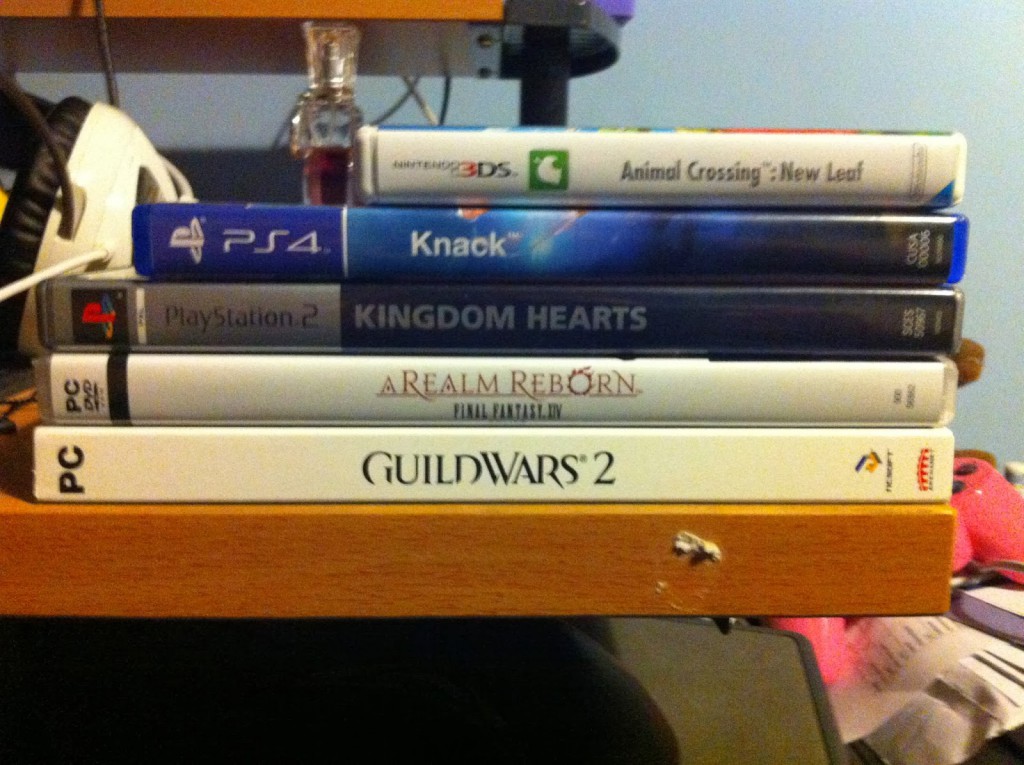 As you can see. Many things to play! And honestly not that much time to play them. I’ll be busy for a while atleast!