Now that I’m at the brink of graduation from university I find myself in the position that I have a lot, and I mean a lot, of free time. Due to the jobmarket being as is I don’t expect to find a job soon so this will leave me with days to fill.
So far I’ve been entertaining myself with FFXIV. My character, Sandrian Noble on Moogle EU, is slowly levelling up all jobs and seeing most of the game. I have a Paladin, Scholar and Summoner at level 50, a Bard at level 41, both Black and White Mage at level 30, Pugilist (Monk) at level 20, Marauder (Warrior) at level 11 and finally Lancer (Dragoon) at level 10.
If I want to get all of them to level 50, and I plan to do so, I will have to make some sort of playing schedule because honestly I will get burned out if I don’t. Even if I love playing Final Fantasy as a whole, levelling the classes through the same content gets kind of tedious if you do it for the 5th, 6th, 7th time. So I need a break from the game every now and then.

Now queue Wildstar. It’s hyped up a lot, I’ve been following it myself, and a lot of people I know are going to play it. It seems to be one of the first “sci fi” based MMO’s to draw my attention, I tried SWtoR 10 mins and hated it, and I would actually have the time to play it. I’m just really doubting if I should jump the hypetrain.
First off, it’s another sub-based MMO. Although they’re introducing a system where you can buy your sub via ingame gold, it requires a lot of playtime to actually acquire those things. I’m quite sure that people will sell them for impossible amounts of currency, which in turn forces everyone to buy the sub anyway. Considering that I’m already paying my sub for FF and that I will probably pick up WoW around Warlords of Draenor again I don’t know if it’s very smart to pick up a third MMO, especially since my income has very much diminished over the past month.
Secondly I’m not really sure if I can commit to playing yet another game. I notice I get bored with things fast lately, I thought I would be playing much more Diablo III than I’m actually doing, and it looks like Wildstar isn’t very casual friendly (please correct me if I’m wrong). I’m afraid that Wildstar will suck me in which will lead to me dropping FFXIV, a game where I’m finally happy in. I’m not sure if this will happen mind you but my previous attempts of playing two MMO’s have miserably failed because I’m bad at setting boundaries. I have trouble saying “no” if people ask me to do stuff and in turn don’t do what I want to do myself.
Thirdly, I’m not sure if I actually like the game itself. I have played some Wildstar beta and found it to be very graphically glitchy then. Watching the streams now it seems that a lot of players are using add-ons to help them level. The only class that has gotten me immediatly hooked was Stalker. I didn’t try much of the rest but noticed that I don’t really like the battle system with ranged classes from the bits that I did play.
Lastly I’m really worried that Wildstar will be yet another “overhyped” game that will draw a bazillion players at the start, but die out after one or two months of play. It’s happened to so many MMO’s. I know that there’s still thousands of people playing Guild Wars 2, Rift, TERA and whatnot but I’m used to the massiveness of Warcraft and that’s probably making me biased. 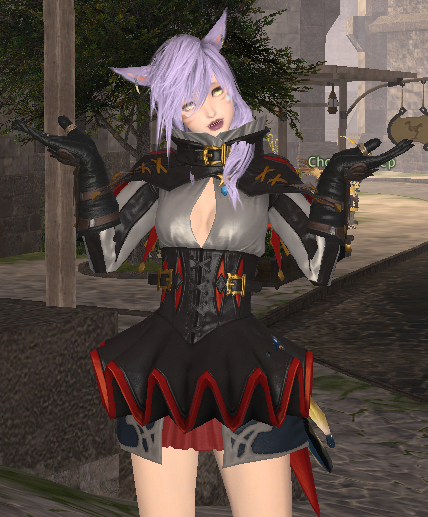 I could be worried about nothing since FFXIV has around 1.5 million people subscribed and playing and is still bustling with activity after almost a year after launch. But there’s still that little bit of me that’s concerned. Nevertheless I caved in and bought the game, against a discount, and am now taking a risk. Again. There are some Wildstar posts to be expected the coming week. I won’t stop playing FF14 however, and I did promise some Rafflesia pics.