So today I managed to stripe two goals of my August gaming to-do list! I finally finished off the last few Garrison campaign quests on my Priest and I levelled my newbie Hunter on Draenor to level 30.
I think the Garrison Campaign was one of the few lore bits that Blizzard did right this expansion. I loved being sent on new quests after I had dinged max level and how the story unfolded after I worked my way through all the zones. Luckily apparently Alliance got the better end of that trade as our Garrison campaign had a bit more depth to it than the Horde one did, but overall the experience and idea of it was good. I managed to complete the latest quests, the ones that came with 6.2, today and it showed some interesting stuff. Mostly how some of the bosses of the Hellfire Citadel raid came to be there. I liked the bit of extra lore and was also saddened that Blizzard didn’t do more of this throughout the expansion. Let’s hope they will make up for it with Legion ™.

The Hinterlands
So I had been levelling up my baby hunter Aylanna mostly on quests and had arrived in Arathi Highlands at level 25. Of all the zones left devastated by the Cataclysm, Arathi has been one of the few that has remained relatively untouched. It’s still green hills and farmland, crowded with Raptors and Spiders.

The ruins of Stromgarde are also still left standing. It’s one of those quest hubs that you keep being sent back to. And again. And again… And again. I guess it’s one of the few things that are annoying to me when it comes to Warcraft questing. Just give me the follow up quests as I complete them, instead of making me run back and forth all the time!
Even the layout inside of Stromgarde hasn’t changed. One part is being occupied by the Syndicate. One part by Ogres and the last part by the Alliance, trying to hold on to one of the last remaining Human Castles in the North. 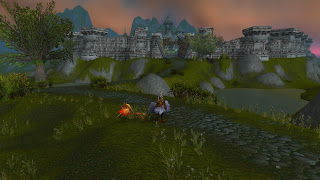 Ofcourse there has been a little adjustment to the zone. They have added a small Forsaken camp next to the wall separating the Highlands from Hillsbrad Foothills. But other than that Blizzard didn’t deem it necessary to fiddle around with this zone too much, for which I’m glad. Seeing as they did their best to completely destroy Hillsbrad and make it a Forsaken/Horde zone. (Really Blizzard, did you have to destroy Southshore like that?). I was a bit sad that the zone itself didn’t last that long for me. Due to having Heirlooms leveling just goes so fast. It makes you miss out on some interesting quests. Maybe I’ll go back to it when I’m max level, just to see what more is out there in the zone.

As I expected I’m having a hard time motivating myself to do my ex-roulette every day. On the other hand leveling my White Mage is going faster than I thought. Doing guildhest and low level roulette alone, coupled with some Hunting Logs, I’m now sitting well into level 40, which means I only have 10 levels to go for that goal! For now it seems doing my roulettes gives me a level a day, so if that keeps up I will be 50 in ten days. Yay for me! I will get to do more crossing on my to-do list AND I will have the healer of preference at the point I wanted it before the xpac came out.
The only thing I need to decide then is if I want to keep on leveling that to 60 or aspire to bring all my classes up to 50 first. That would mean leveling my Warrior, Monk and Ninja… And the three new jobs: Dark Knight, Astrologian and Machinist. For now I’m leaning towards leveling my White Mage to 60 and use it as queue booster. But maybe I will change my mind. We shall see in the future!