Skip to primary content
It’s FFXIV time!
The last day before I start work, and definately don’t have as much time for games as I normally have, I decided to play some FFXIV. And with some I mean a lot. And with a lot I mean I’ve spent about 5-6 hours just playing FFXIV today alone. Why? Because I had to catch up on the weekly Esoterics and Alexander grind! I’ve been neglecting that for weeks now and even this time I won’t make the cap. I’m about 100 esoterics off but well, it can’t be helped. Seeing as I’ve been a bit unlucky with winning drops in Alex turn 2 today I’ve spent quite some time of my life looking at this screen. 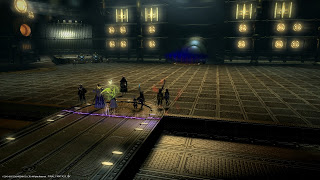 Luckily for me I managed to win the Pedal (boots item) after four or five runs or so, saving me the headache of having to run it over and over and over again. I was luckier in Alex turn 1 and 3, where I won the items I wanted immediatly thus giving me atleast the boots this week and, if I’m lucky tonight in turn 4, the gloves. That would also give me a bit of an item level boost (I’m currently sitting on 183) and would leave me almost done with Alexander Raid Finder. I can only get the accessories, legs and chest from here on and seeing as I’m planning to buy the Esoterics Chest next reset it leaves me with very little incentive to return to this lovely place. That is untill my group starts running Savage Mode.

After my friend had to run for a while I decided to do my low level roulette on my White Mage. So I ended up doing a lot of healing… And a little bit of dancing. 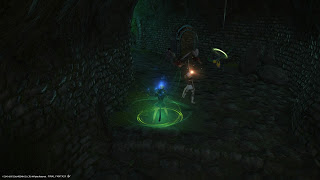 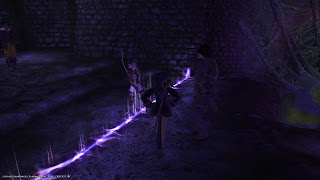 As expected levelling via the guildhest and low level roulettes is fast enough. I was getting a level a day from them up untill hitting 41. Right now I’m sitting about 20% off level 43 which is fine. I’m saving up all my hunting log entries for when I’m 49 so that they are not only easier to kill but it will also speed up getting that last big hump to 50.
I’m still undecided as to what I’m going to do after that. A part of me wants to level my WHM up to level 60 so I can sit back and relax while running dungeons. Another part of me wants to get every other class/job to 50 first. Which is quite a task. Seeing as I won’t nearly have as much time to play the coming weeks as compared to now I think it’s better to just stick to WHM for the time being. This allows me to switch up some of the max level content aswell, instead of constantly sitting on my Dragoon, who is just grinding Esoterics for the time being.

As for now I’m waiting for my friend to return to do Ex-roulette and hope and pray that my first day of work tomorrow won’t be too exhausting… Or I won’t be gaming at all!