In today’s blog I want to talk about the Night Elves. There has been some discussion on my Twitter feed about Tyrande and Shandris and the roles they should play in the coming expansion… And it has rekindled my Night Elf fangirl lore fire.

The Night Elves have always been (and still are) my favourite race in World of Warcraft. I felt very much attracted to a society that seemed to be matriarchal and where the women were the warriors (sentinels in this case) and leaders. After reading Knaak’s War of the Ancients I fell in love even more with the race.
Not only are they the ancestors to the Blood Elves and consequently Sylvanas, they are also a big part of the reason Azeroth is shaped as it is today. And even dating back to the time of War of the Ancients it was a female dominated society, with the most respected members being the Priestesses of Elune next to Queen Azshara herself.
Their lore is rich, with them being among the oldest races on Azeroth, and their people used to be many, with long healthy lives and a society of relative peace.

With Legion I really hope to see Blizzard rekindle some of that Elven lore. They already revealed to us that we will be seeing Queen Azshara in the next expansion in one way or another. Personally I hope she will be getting her own big story arch, and a bossfight, since this is one badass lady. During her time as Queen of the Night Elves she was probably the most powerful being on Azeroth that wasn’t a God or a Demigod. Even Mannoroth did not dare to lift a finger to her when he was working on the invasion during War of the Ancients. Forming a pact with the Old Gods, which eventually turned her and her followers into the Naga, may have only made her more powerful. Powerful enough anyway to kidnap Neptulon, God of the Seas and doing god knows what to him while she has him captured. We can only assume she has been biding her time, plotting how to change Azeroth into her own private utopia.
With the reveal of the Broken Isles zones we already heard we will get a chance to explore Suramar, the ancient Night Elven capital, and see for ourselves how Night Elven society would have been if the War of the Ancients never happened.

Another big protagonist this expansion is Maiev Shadowsong. Ex head of the Watchers, Captor of Illidan Stormrage and Warden to the Night Elves since the times of the War of the Ancients. A lot of crazy things have happened to Maiev. She may have been a little too obsessed with capturing Illidan and she may have gone a little crazy after being betrayed by her own folk. But she is back now and we will see how much of a part she gets to play. I won’t be surprised when her story arch will mostly evolve around Illidan again, but I guess we will wait and see. 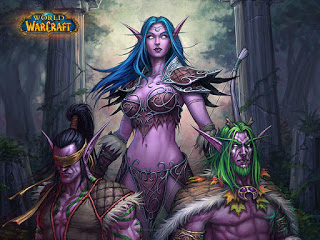 Tyrande
The one big Night Elf character we have essentially heard nothing about is Tyrande. Actually Tyrande has gone into a some sort of non-existant state ever since Blizzard reintroduced Malfurion to the game. Which, in my opinion, is a huge shame.
Not only has Tyrande led the Nightelves (against her will) for thousands of years, she is the chosen of Elune and a pretty badass fighter on top of it all. She is also responsible for murders on the Watchers so she could get Illidan out of jail, probably not her finest moment.
And yet she seems to be forgotten. Malfurion has been leading the Night Elves since Cataclysm came out, and has played a pretty peaceful role while doing so. Which comes as a bit of a surprise since the Horde is slowly chewing their way through Ashenvale, destroying much of his beloved forest.
Maybe it’s time that Tyrande had a fit and chose her people over her husband. Since really, she has been the one to lead them for thousands of years. She has seen them suffer, losing their immortality, getting pushed back by the Horde in Ashenvale and the Naga in Feralas. Especially now that Azshara might come to the forefront again, maybe it’s time Tyrande picked up some of that murderous intent again and turn it into something worthwile.
I would love to see her leading the charge for her kin. Travel to the Broken Isles and settle the score with Azshara once and for all. Make Night Elf women what they used to be and what they are supposed to be again: badass fighters.
But I guess one can only hope…