Skip to primary content
I’ve been spending the majority of my gaming time messing about in WoW again. Being so familiar with this game I find it easy to set goals… And actually accomplish them. It’s also the game I keep coming back to anyway and, with a lull in FFXIV and Wildstar being almost impossible to play, I feel like WoW is just the stable factor I need right now. So I’m trudging along, setting goals for myself to obtain. I have gotten my legendary ring and, last week, I managed to unlock Draenor flying aswell. It took me a while! But atleast I got it done. The moment I unlocked flying I also had 150k Apexis Crystals and could by myself this beautiful mount from the Order of the Awakened. I really like the colour palette on it and it looks absolutely amazing coupled up with a Shadow Priest. 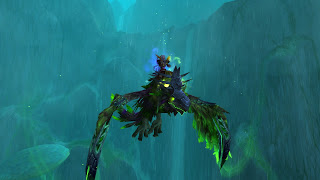 Gaming Goals September
Looking back to September I have gotten some stuff done and some stuff is still up in the air.
As far as Blizzard games go I managed to get my Legendary Ring on my Priest in WoW, unlocked the second wing of Naxxramas in Hearthstone and got my Seasonal Crusader to level 70. My Hearthstone rank is still stuck on 20. For some reason I’m just not interested enough to battle my way to a higher rank and this one awards the card back and the rank 20 chest so for now I’m fine with that.
I haven’t been able to purchase the second wing of Blackrock Mountain. Instead I have been doing some Arena runs for additional cards.

My heroes project has seem to come to a halt a bit. I’m not sure where and how to find the time for it right now. It’s still something I would love to do and I’ve been thinking of streaming my sessions, but for now I just can’t seem to schedule it in.

As for non Blizzard Games…
My time has mostly been swallowed by Destiny on the PS4 and not much else so I haven’t been playing FFXIV or FFX at all. The only thing I managed to do on FFXIV before my sub ran out is get my White Mage to level 50 so there’s that.
I haven’t been playing Mickey’s Castle of Illusion either. Again, scheduling problems.
Setting goals like these each month doesn’t really seem to be working out for me. I tend to set goals for games I don’t really play and I feel like I need to change the way I approach things… So instead of setting monthly goals I’ll just make a post every now and then what I’ll be working on for the coming time and when I’ll finish it. My gaming goals page will become more dynamic aswell this way. It may sound a bit fuzzy but you’ll see what I mean over the course of this month. 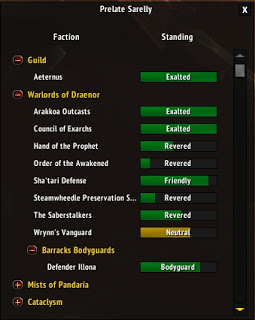 What I’m Aiming For
Right now I’m working mostly on stuff in World of Warcraft. After getting my Legendary Ring I thought it was time to unlock flying for all my characters. Now that I’m done with that I’m turning my attention to getting all my reputations Exalted on my Priest starting with Hand of the Prophet, Order of the Awakened and The Saberstalkers. These are all tied to Tanaan Jungle and thus easy to manage. As you can see I’m further with some than with others… I suspect Ordere of the Awakened to take the longest here. Especially since I have no trading post.

Next to this I’m also remodeling my Garrison on my Priest. I’ve done away with the Dwarven Bunker since I have geared up all my followers and it’s not worth keeping for just the one seal per week. Instead I have reinstalled my Stables and am planning to do the achievements related to that building so I can unlock two more mounts. I’m also planning to replace my Inn with a Trading Post… Even if it’s just to gain that extra experience while rep grinding. I guess I should also pick up Defender Ilona again as bodyguard during my dailies and grind rep with her.

One of the other games I’ve been playing and focussing on a lot is Destiny. I’ve decided to just stick to one character on there for now and am slowly working my way through the quests I have left over. Unfortunately some require me to raid, which I haven’t been able to yet, so I’m focussing my attention mostly on the quests that I can solo. Namely the Sword quest and the special Redbull questline. This will probably keep me busy for a while yet since both of these chains require copious amounts of grinding.
I’m also still trying to log Wildstar regularly and really want to experience the endgame. For now I’ll just advance whatever character is playable at the time. I think my Engineer is level 6 or 7 and my Spellslinger is level 5 so I’m really at the start of the game still.
Lastly, like I mentioned in my post yesterday, I really want to finish my Kingdom Hearts game on my 3DS. It’s perfect for when I don’t want to turn on my PC or PS4 and just want to sit/lie down, relax and game.

So yeah, that’s the stuff I will be working through for now. It’s games I all actually play and I’m not really giving myself hard deadlines on any of this. I found out it helped me reach my goals in WoW so far and thus I will try to apply this to all the games I am currently actively playing.

2 thoughts on “Trudging About”