Every now and then I realize how friendly and heartwarming community on the internet can be sometimes. I have a bunch of friendly people on my Twitter that I follow and that are also part of the dedicated positive blogging community. Some of their blogs are featured on mine, mostly the ones I actually read the most and would recommend to anyone trying to find their way in the big world of gaming.
Ofcourse there are a lot of others that should get the same recognition and maybe I will get around to that at some point. Some people might not be in my sidebar but that doesn’t mean they don’t produce great content and I poke around on their blogs every so often. Alas I only have so much time in the world and I wish I could feature and follow every single one of them more often, but that would leave me with little to no time for myself or my own blog.

With this post I just want to take the opportunity for a shoutout to a very awesome community. You all know who you are. Keep doing what you’re doing! 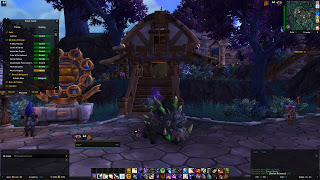 Dailies
I’ve been steadily plowing away at doing dailies on my Priest to get my reputation up with the various Tanaan Jungle factions. Yesterday I managed to get Exalted with Hand of the Prophet and scored this adorable fel-tainted Boar. It’s the same theme as my fel-tainted Dreadhawk so I will have matching mounts for my Shadow specc and I love it.
The thing I don’t love is Blizzard once again forcing dailies upon us as the only means to get rep with factions. I remember back in Mists of Pandaria it would literally cost me one or two hours a day just to open up and then do all the dailies associated with all the different factions. It was mind numbing and, in my opinion, a horrible way to go about getting reputation. They have returned this practice for two of the factions in Tanaan Jungle and I will be more than happy once I can scrap that part off of my to-do list. The other side of the coin is that for all the other factions various grinds are necessary and I’m not really keen on doing that either. But the repetitive nature of the dailies, and the fact that they take about 45 miutes to get done, make them boring fast.
It’s unfortunately a system that has carried over into the few other MMO’s I’ve played so far. Beast-tribe dailies in FFXIV is probably the one that comes closest to the WoW system and, eventhough I worked through them, I didn’t like finishing them up at all. It was more to fill time and acquire mounts and pets that I did them but otherwise I would not have bothered to do them at all.
The same goes for me grinding out those reputations on WoW I guess. There’s not much else to do in the game so I try to set goals for myself. For now I can drop atleast a few dailies since that faction is done… And I should be done with Order of the Awakened in the next few days or so. This leaves me only with grinding rep with the Saberstalkers and then I will probably turn my attention to the Steamwheedle Preservation Society. They involve turning in various items from Nagrand, which ofcourse need to be farmed, but atleast they don’t rely on dailies…

King’s Fall
I’ve been poking about in Destiny aswell over the past few weeks and yesterday evening I finally managed to join a clan raid. They had a savepoint at Golgoroth and we managed to take that boss down in 2 tries. He dropped me new gloves and a legendary helm engram… Which turned into a very nice exotic helm. After that we had some tries on the Daughters of Oryx but didn’t get to kill them because our leader had to go. All in all it was a nice bit of raiding. The tactics on the bosses in this Destiny raid are not impossibly hard but they do require proper handling. There is no way to cheese your way through a fight and mistakes are punished… But it’s a serious amount of fun. I think Bungie did a great job with this raid and with the hardmode coming out next week I hope it will keep people busy for a while.
In the meantime I’ve been working on acquiring my Exotic Sword. Right now I’m on the part where I have to gather 10 specific materials, which are a rare drop from regular material nodes on the Moon for me, and kill 500 enemies with Solar abilities. I picked up the Solar sword for my Warlock because I figured I would never play Sunsinger so I wanted a sword in one of the elements that my abilities are not. It also seems that the Solar sword is quite rare and in my clan I think I’m the only one wielding it… Which could give me an advantage in raids.
Other than that I’m tieing up the loose ends of quests I still have in my quest log. I know where I can get a few more quests and gear upgrades and once I finish off my Sword I will probably turn my attention there. For now though I’m mostly content with shooting stuff in dailies and strikes and some general faffing about.