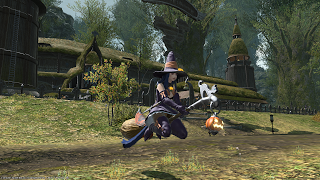 It’s kind of funny how I get excited over an event that isn’t even celebrated officially here in the Netherlands. But seeing as all the games I’m currently playing have some sort of Halloween event going (except Destiny), I can’t help but feel a little envious when it comes to my US friends who actually get to celebrate this holiday for real.
It’s really interesting to see how every game has it’s own take on the holiday and celebrates it differently. (Warning, spoilers ahead!)

In FFXIV this year the developers have chosen to do a simple questline for All Saint’s Eve, as the holiday is called there, which rewards you with a nice glamour set, a pet and a mount. If you so choose there is also Halloween themed furniture to buy for your house or FC room. This time it’s paid with Gil whereas last year I remember having to farm currency from FATES to get things from the vendor.
Personally I enjoyed the little questline in FFXIV. It took me about 30 minutes to complete and I’m really happy with the rewards. And the fact that they actually offer a permanent kickass looking broom mount is something some other MMO’s can look at and learn from.

Speaking of other MMO’s. WoW still has it’s tried and true Hallow’s End with the Headless Horseman to defeat in the Scarlet Monastery Graveyard and a ridiculous amount of Trick and Treat bags spread out across the entirety of Azeroth. The core of the holiday event hasn’t changed much over the years, but they have been adding stuff like pets and toys and, this year, a costume for Pepe.
I have obtained all of the pets that this year’s event had to offer, but I have yet to see either of the toys drop for my Priest. I really hope I get lucky soon because it would be a huge disappointment I would miss out on stuff due to RNG. 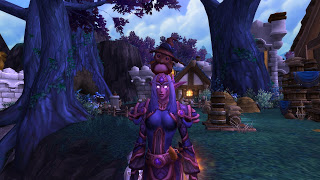 Wildstar has it’s first real ingame event aswell this year: Shade’s Eve AND a hoverbord event that only lasts for 5 days. Unfortunately I have not arrived in Thayd yet with my Engineer or my Spellslinger, so I won’t be able to comment on those events just yet. But don’t worry! I will when I get there.

Lastly I managed to grab a special Heroes of the Storm portrait for watching the official stream with my Battle.net linked to my Twitch account. And they announced a special Halloween event ingame there aswell! So I’m seriously planning to get that.
Speaking of Heroes of the Storm, I am moving my project over to my main account. I don’t really play that much and I feel like I’ve wasted a lot of resources on my main account by not playing it. So I will continue to go for 100 games on Valla on there (I only need 31 more) and then I’ll pick out a new hero. Probably Jaina or Kharazim, but I’m not sure yet which of the two I prefer.