One of the fun things that Pokémon Silver introduced was the day/night cycle. This concept also introduced Pokémon that were only obtainable during certain times of day. One of the examples is Hoothoot the owl who only shows up at night but also a Pokémon like Ledyba who would only show up during the morning hours.
I’m kind of sad they have mostly let go of this concept in later generations. Ofcourse Sun & Moon have a day/night cycle of their own and it influences the Pokémon that spawn. But night exclusive Pokémon or morning exclusive Pokémon have become a thing of the past.

Another thing I had forgotten about this game is how grindy it actually is compared to the last few generations. Pokémon take way longer to level up, everything hits you harder and there is no party-wide experience share to be had early on. I’m now a little over 2.5 hours into the game and I’ve just cleared my way through the Bellsprout tower in Violet City aswell as beating the first Gym leader: Falkner.

Bellsprout tower is kinda fun. It’s basically a tower which has a swaying pillar in the middle and is filled with monk trainers who all use.. Bellsprouts. It’s really the place you want to go before you challenge the Pokémon Gym to train all your Pokémon to around level 10. It’s also one of the few places in the game where you can catch Ghastly, which I did. After defeating all the Bellsprout using monks you end up at the head monk who has just battled your rival. You see a bit of dialogue, your rival disappears and you can challenge the guy so you can earn your first HM of the game: Flash.
Bossmonk (that’s how I called him atleast) uses three Pokémon: two level 7 Bellsprouts, who were easily dealt with by my Pidgey and a level 10 Hoothoot that I killed with my Cyndaquil (Quill). He hands you a HM for Flash and you can use an Escape Rope in the corner to get out of the tower faster than when you’d have to walk back through all the rooms.

After I was done there I headed to the Pokémon Gym to earn my first badge.
Falkner uses Bird Pokémon and, especially if you’ve chosen Chikorita at the start, is quite a tough cookie to beat. You don’t have any reliable Bird Pokémon counters at this point and really have to brute force your way through this Gym. Make no mistakes, this isn’t the stomp that you expect it to be even if the Pokémon used aren’t over level 9. The first trainer in the Gym uses a level 9 Spearow who easily 3-shot my Sentret if I had allowed it. Peck does ridiculous amounts of damage at this stage in the game and I almost lost a Pokémon to it, even though it was on the same level. The second trainer has two level 7 Pidgeys and is a bit easier to take on. Falkner himself has a level 7 Pidgey and a level 9 Pidgeotto (yes I know, he cheats!). He doesn’t use any potions on his Pokémon and I used Quill to beat the Pidgeotto at the end.
Once you’re done and defeated Falkner you get to use your newly obtained HM and he gifts you a TM to teach one of your Pokémon Mud-Slap. I’ve chosen to hold on to this TM for now seeing as it’s a one time use still in these games and I wouldn’t want to teach it to the wrong Pokémon.
Stepping outside of the Gym I got a call from professor Elm. He discovered something new about the Pokémon Egg you delivered to him at the start of the game and he’s sent his assistant to hand the Egg over to you. They want you to hatch it and then report back.
I wonder what Pokémon will hatch from it… 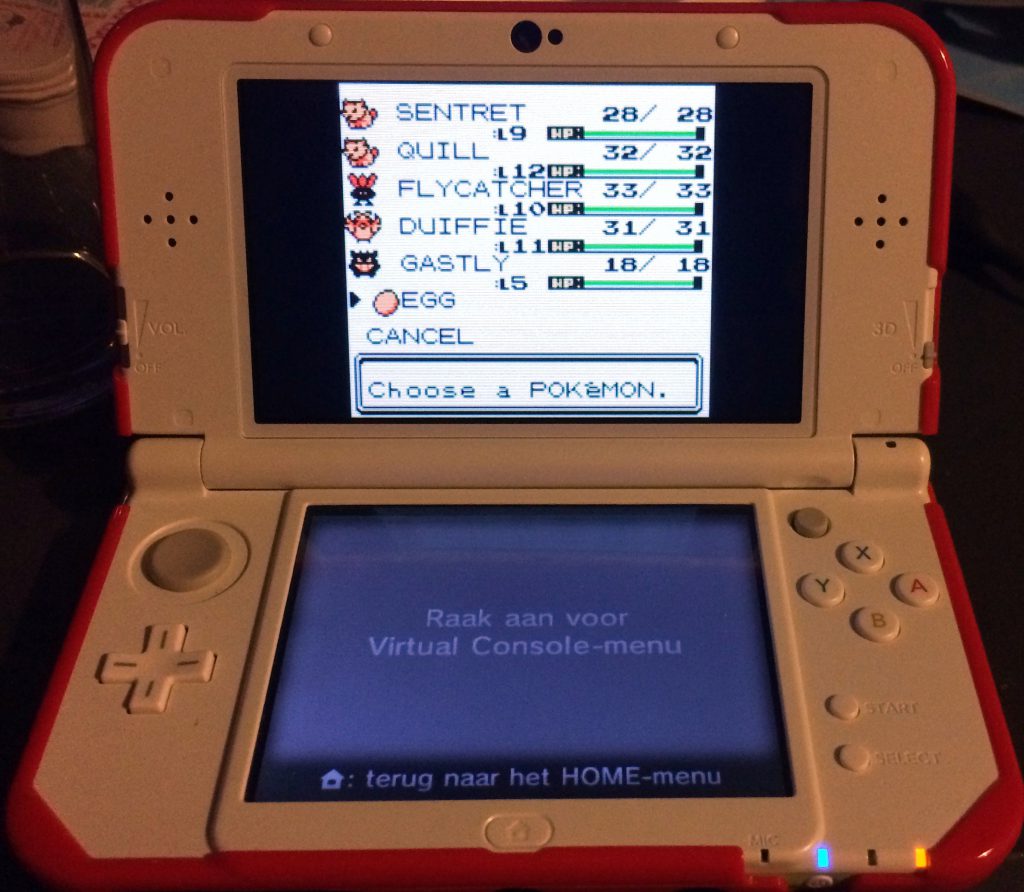 My team after beating the first Pokémon gym!

I stopped playing after that but I did want to share my current team with you guys. As you can see 5 active Pokémon. Sentret the Sentret, Quill the Cyndaquil, Flycatcher the Bellsprout, Duiffie the Pidgey and Ghastly the Ghastly. I actually forgot to give my Ghastly a new name. There is a chance I will later on in the game and change it to “Spookster” just because I can. Personally I feel like I’m starting to have a well rounded team. There’s a Fire and Grass Pokémon, a Ghost Pokémon and a Normal and Flying. I want to get atleast a Water Pokémon in as replacement for Sentret later on and after the Egg has hatched I need to think about what I want for 6th Pokémon. I’m doubting between an Ice, Electric or Rock for now. I guess I’ll see how the game evolves.

See you next installment!