Today I want to take the time to talk a bit more indepth about Drustvar. The first zone I’ve completed in Battle for Azeroth. This post will be rather spoiler heavy so if you’ve not yet done the zone or do not want to be spoiled please stop reading after this paragraph. I feel the need to write up this blogpost because Blizzard, in my opinion, has done such an awesome job with the zone stories in Battle for Azeroth so far that I just want to gush about it. So without further ado, I present you: Drustvar. 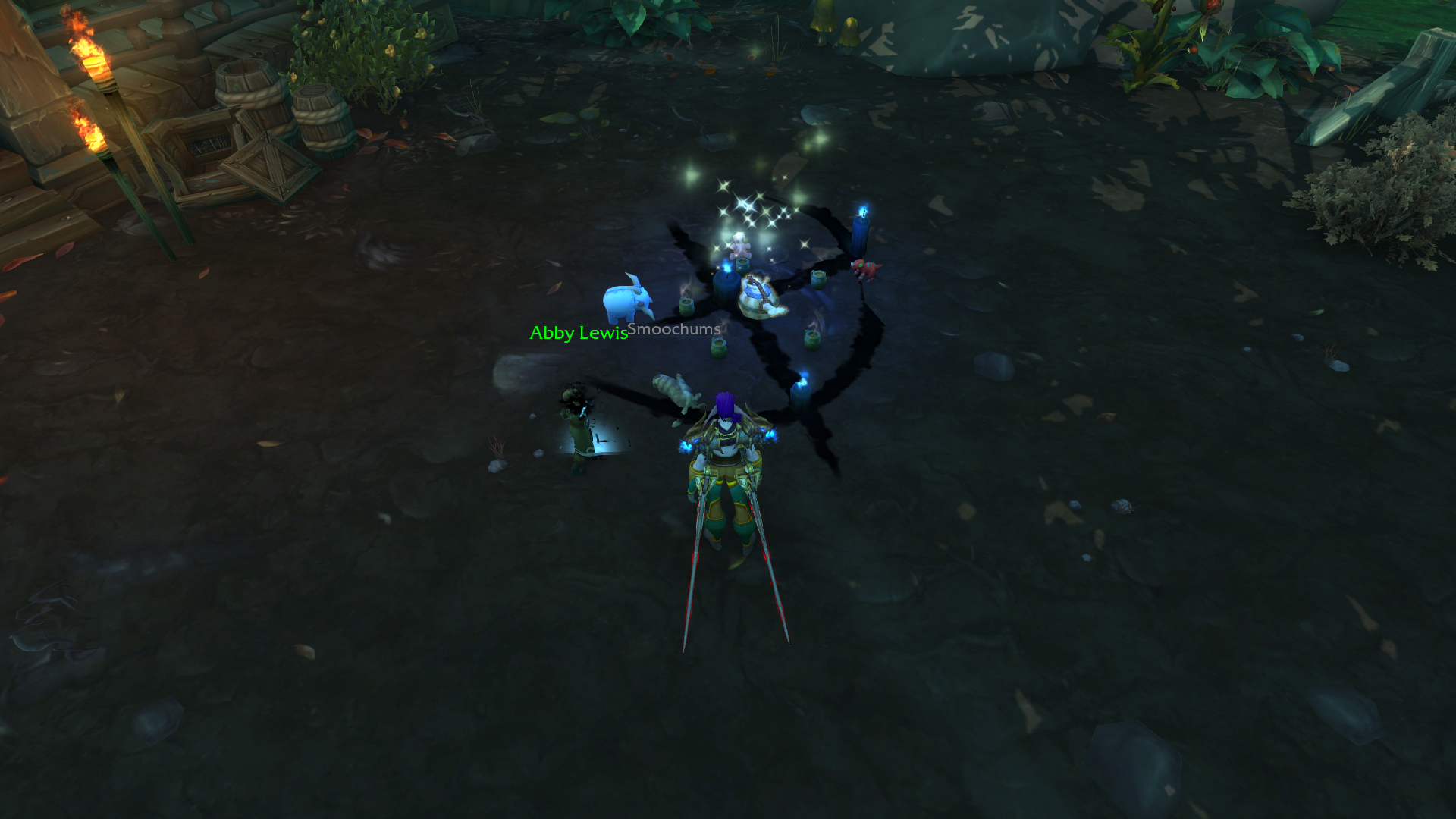 Let me start off by saying that I’ve gone into Battle for Azeroth mostly blank. I did spend a few hours one night on Beta leveling through like the first ten quests in Stormsong Valley but other than that I was a complete blank slate. I wanted to be surprised and charmed by what Blizzard had developed for this expansion so I wanted to experience everything fresh.
The above screenshot is part of the introductory town of Drustvar. You are sent on your way because there are issues and no one has heard from Lord and Lady Waycrest, they rule Drustvar, in a while. As you arrive in the zone the first village you pass through is abandoned and overrun by wild creatures. There is still a little girl around however who sends you on a wild goose chase finding people and things for her. It’s clear from the second quest or so that she’s probably not the nice little girl you think she is. The questline culminates in her summoning a Wicker creature with a satanic ritual for which she killed her cat (poor Smoochums) and one of the few surviving villagers commenting on how the girl has been dead for a while. Yeah, I guess the tone for this zone has been set nicely.

I see a lot of people comparing Drustvar to Duskwood but then in autumn colours and way bigger. I get the sentiment here but Drustvar is so much more than that. The overarching story becomes quite clear very early on: they are having issues with a powerful Witch Coven that is calling themselves the “Heartsbane” and who are cursing every village in Drustvar, making sure the people in town suffer one way or another. 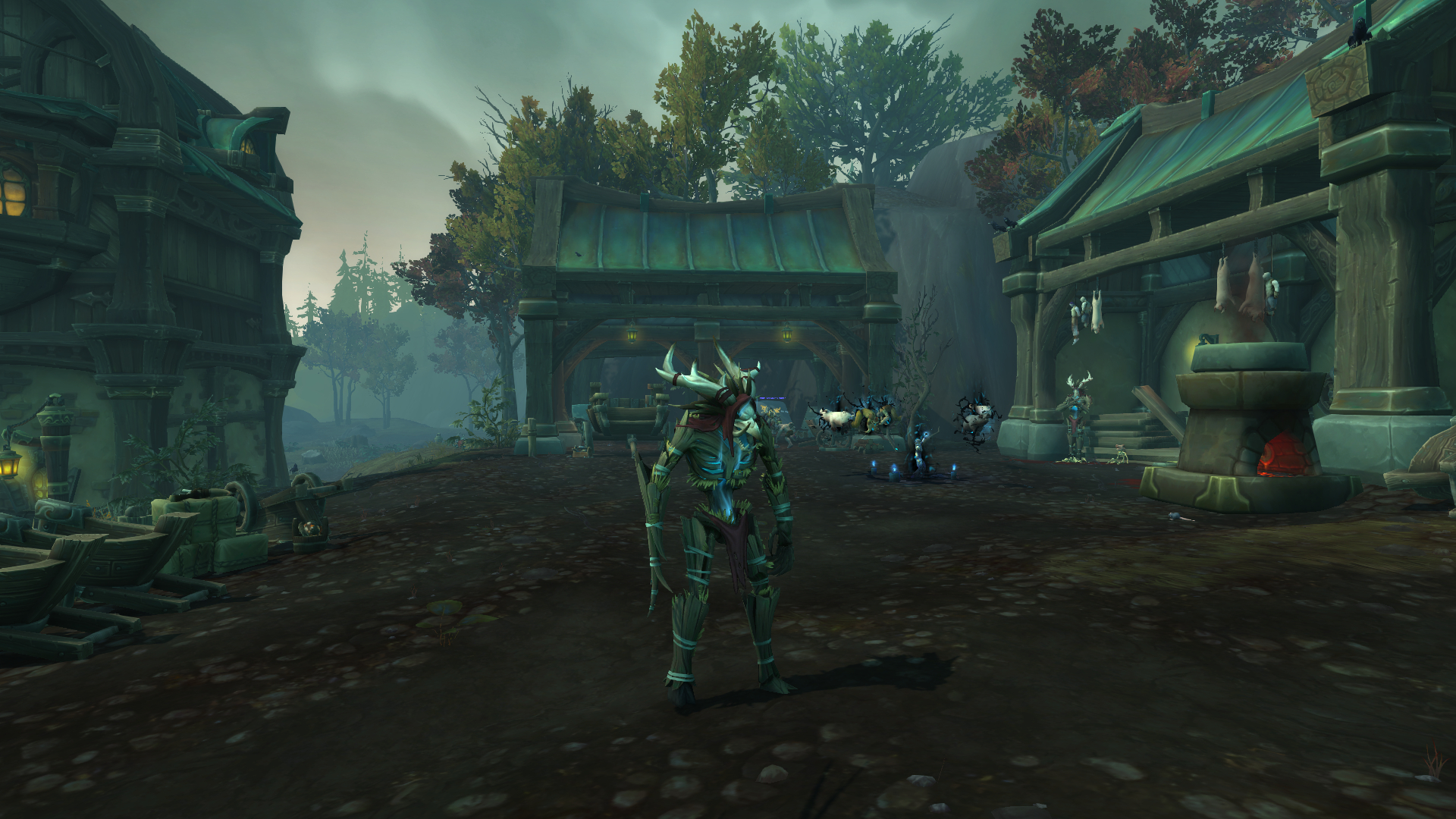 A big part of the Drustvar experience is helping villages cleanse the local curses and kill the local witch of the coven responsible for it. The story really kicks into gear though when you come across Lucille Waycrest who is about to be hanged as witch. She is the daughter of the Lord and Lady Waycrest and she’s gotten herself in a bit of a pinch by being at the wrong place at the wrong time. A part of the questchain to help her escape involves taking control of your very own Wicker construct and clearing out a more powerful Witch that has been terrorizing the village. Let me tell you, it was awesome. Running into a mine full of mobs and just completely obliterating them with my Wicker body had me cackling. I mean just look at how I looked? It’s an amazing theme and I loved all the Wicker looks in Drustvar.

Anyway, after you’ve cleared Lucille’s name and rescued the villagers of the village that wanted to hang her you set out on a journey towards Waycrest manor with Lucille and Marshall, who is the commander of the Waycrest troops. Lucille knows a large part of what has been happening in Drustvar and seeks to revive an ancient Order that used to fight the Drust as the Kul Tirans were settling down in Drustvar. I guess this also leads to big plotpoint number two. The Drust are forest creatures that look kind of like the Wicker creatures you see everywhere in the zone. When the early Kul Tirans settled there was a war between them and the Drust that the Kul Tirans won. Their final victory was a Waycrest stabbing Gorak Tul, the leader of the Drust, to death and claiming Drustvar for the Kul Tirans. It also becomes clear that not all the Drust were against Kul Tiran settling in their homeland and they have remained on friendly foot with the humans untill this day. They call themselves the “Thornspeakers” and are the amazing Wicker themed Druids that the Kul Tiran humans can become.
As you advance into the zone it becomes clear that Gorak Tul may not be as dead as everyone thought he was and that he is probably the mastermind behind the relatively recent forming of the Heartsbane coven that terrorizes the land. As you rebuild the Order of Embers and work your way through the zone you are treated to a beautiful landscape with many sidequests. The atmosphere in Drustvar is amazing to say the least. The background music is superb and it’s really worth doing every single questline you can get your hands on. Next to the Witches and Wicker creatures you get to fight Yetis, wild beasts, Stone Guardian constructs and even a small patch of mutated mushrooms. You help a Goblin retake a town from pirates. You help create alchemical fire that will make all the Wicker constructs burn. You stop a Wicker construct army from being built and marching through the zone. On the way there are a ton of rare creatures to kill and special treasure chests to find. I personally enjoyed the Runebound Chests because they forced you to look around you to crack the code that keeps them locked. You learn about the history of Drustvar and Kul Tiran as a whole and you get to know a lot of interesting characters. One of my favourites is the falcon master that you pick up somewhere in the middle to become an Inquisitor in the Order of Embers. I like the whole “old England” look and feel that’s tied to the entirety of Kul Tiras but Drustvar just portrays it the best with it’s woods and villages. 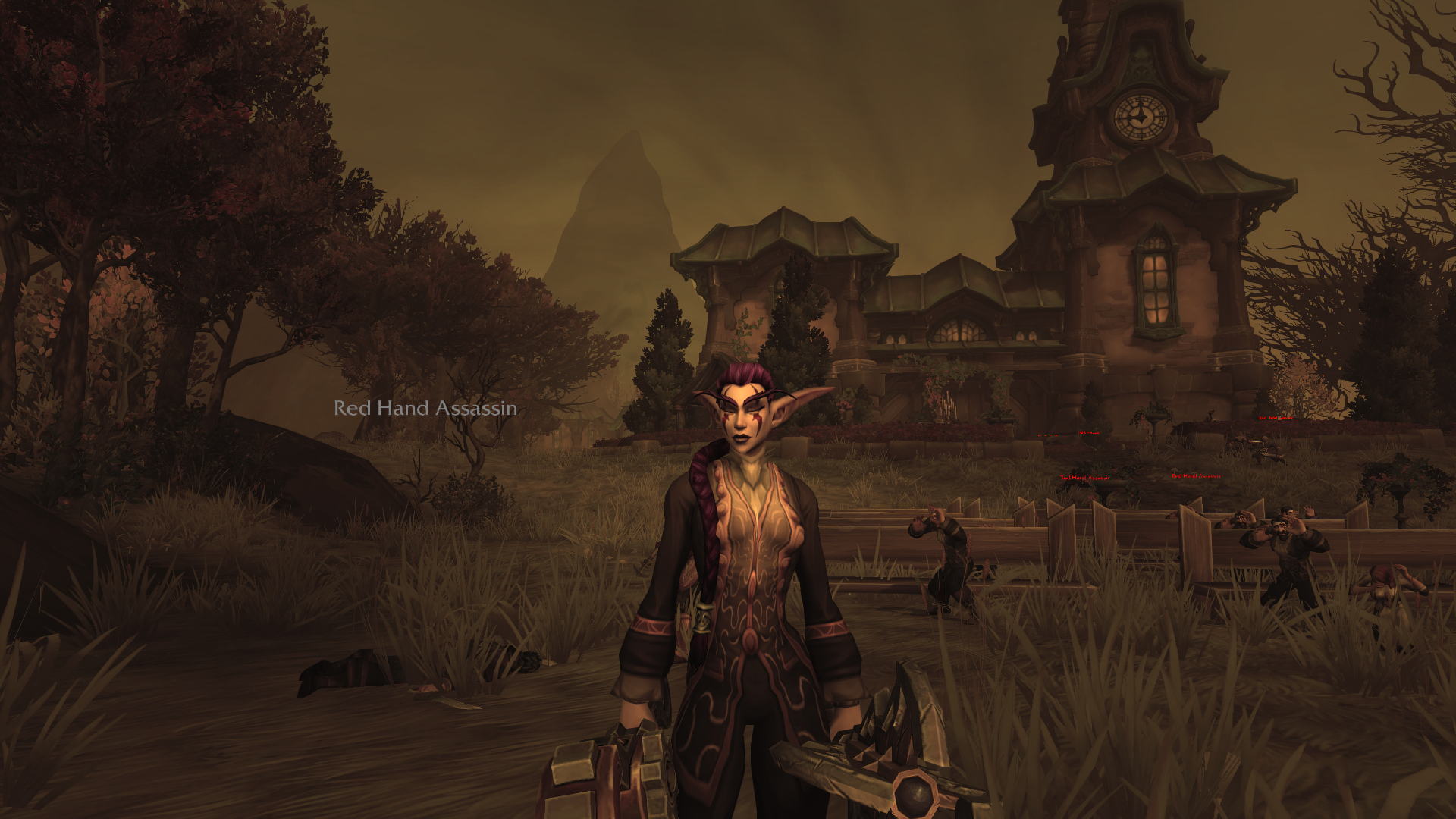 The Drustvar zone story culminates in Corlain and Waycrest Manor. As you arrive there it seems like the coven has taken over the town and the manor and it’s up to you to clean out the mess and figure out who is behind all of this. And more important, what has happend to Lord and Lady Waycrest?
This is also where the story kind of splits in two. As you make your way through Corlain it’s revealed that the Waycrest Manor went on lockdown and nobody really understands why. It also becomse clear, from diaries that you find in Corlain, that the girls of the town have been sneaking out during the nights and supposedly went to Waycrest Manor. After that the disappearings started.
The other part of the story takes you to a chapel where you encounter the ghost of Lucille’s dead fiancée. As he shares with you his memories of what happened during their wedding it becomes clear who the culprit of this zone really is. The whole wedding scene was a nice nod to the “Red Wedding” in Game of Thrones, proven by the dead “Red Hand Assassin” in my above screenshot. As you help the ghost find peace you make a final push into Waycrest Manor where it is revealed what you’ve already known: Lady Waycrest is the head of the Witches’ Coven. She is responsible for all the Witches that have been making life hell for the people of Drustvar. She has killed and revived her husband to serve her as a grotesque individual for eternity and she is the one responsible for murdering Lucille’s fiancée at their wedding day. As a final act of cruelty she turns Marshall against you and you then have to kill him while her and her husband flee into the Manor.

Officially this is where the zone ends. You’ve figured out who is behind the Coven and you’ve waged a war to get to there. Lucille takes over as new ruler of Drustvar and sends you back to Boralus to declare Drustvar’s allegiance once more. However she also gives you a quest to chase her parents into the Manor (which is a dungeon) to deal with them once and for all. The dungeon itself is a bit confusing but no less fun, I can see this one being quite a challenge on Mythic+. You kill her parents in the end and then Gorak Tul pops out as final bad guy, bragging about how he was able to influence the Lady Waycrest to do his bidding and be his way back into the world of the living. As you beat him he retreats in what he calls “the Blighted Lands” and issues a final threat.

All in all the zone was an epic experience for me. The story buildup was amazing, especially with all the added cutscenes Blizzard seems to be doing this expansion. I’m guessing they stole that idea from FFXIV’s book. Some of the quests were downright hilarious, like the one where I had to prick peole with a Silver needle to figure out if they were Witches. Or the one where I pick onions to deter them, because obviously onions are nasty and smelly and no one wants to come near those. Now that I’ve finished the zone and won’t be back untill endgame I’m going to go out on a limb here and assume the WorldQuests in Drustvar will revolve around clearing out what remains of the Coven and helping villagers rebuild. I wouldn’t mind doing those quests at all because it will take me back to a zone I fell in love with. I really hope Blizzard can keep up this level of storytelling throughout the entire expansion, but that’s something only time will tell. 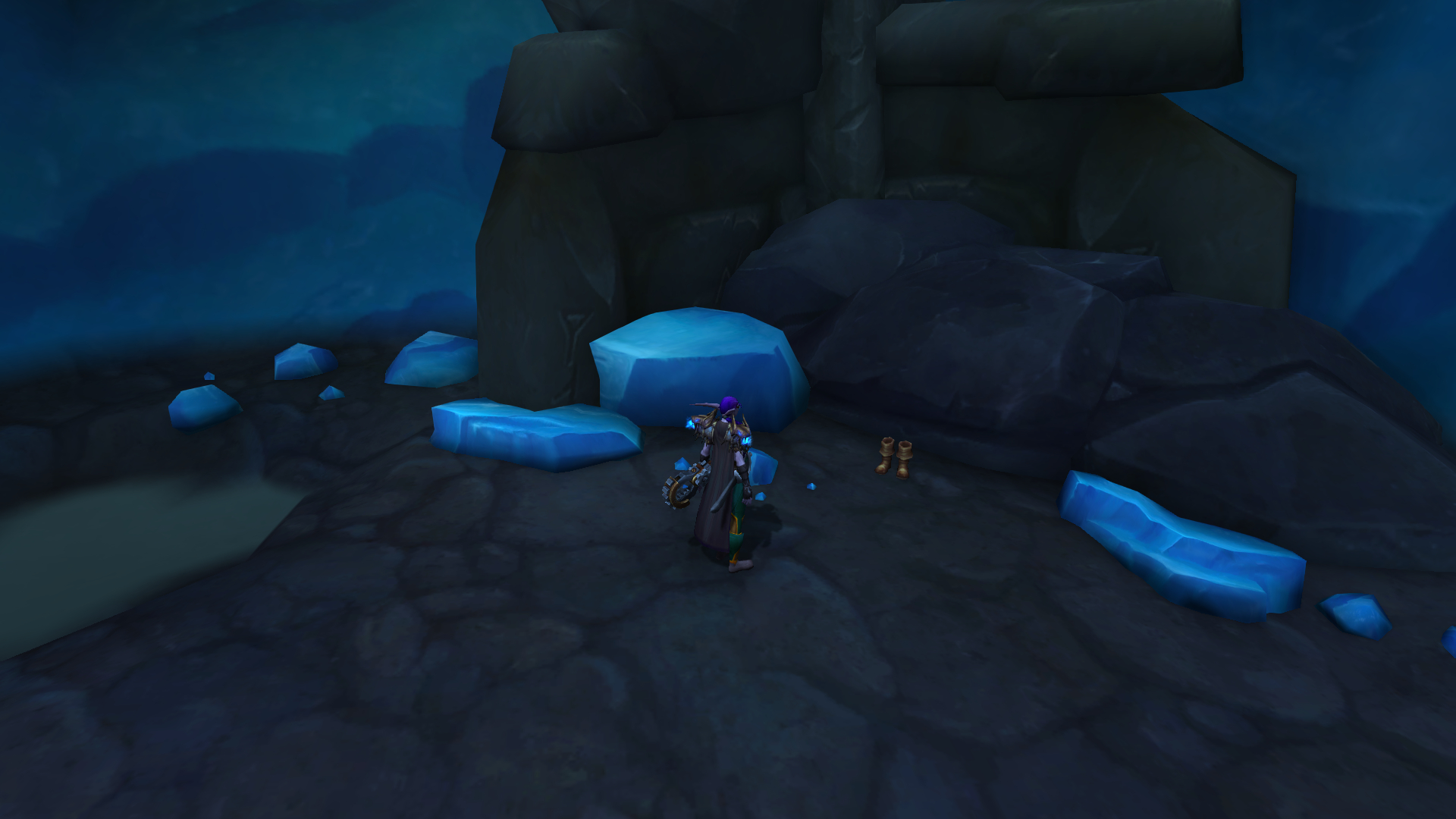