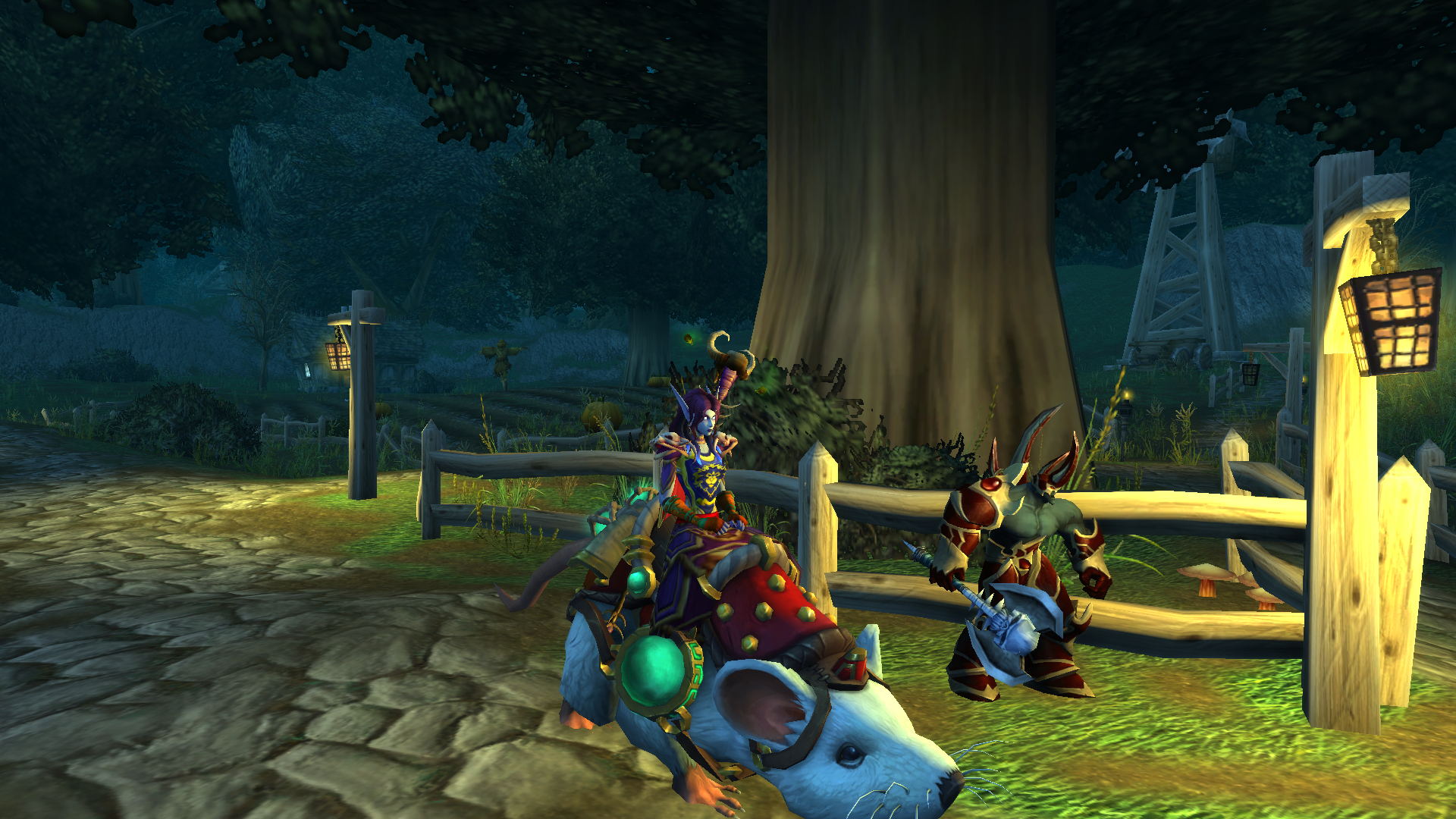 For some reason I’ve been feeling the leveling itch in World of Warcraft again. The current endgame content isn’t really appealing to me, I just can’t be arsed with the Horrific Visions and all that nonsense right now. So instead I rolled up a new baby Warlock on a different server where a bunch of friends reside on and made her a Void Elf since I hadn’t unlocked the Void Elf Heritage armor so hoping to hit two birds with one stone this way.

So far the puttering around has been pleasant. I went straight to Duskwood from Stormwind and have been making my way through the zone while also spending time queueing up for random dungeons to keep things interesting. I ran Scarlet Monastery, which on retail is the lovechild of old Graveyard and Cathedral I guess, and everything went pretty smoothly. Being fully decked out in heirlooms will do a lot for your damage and as such things just melted inbetween my slightly overpowered Fel Guard, summoned Dreadstalkers and Imps and me cackling with spitting out Shadowbolts and Hand of Guldan left right and center. Truly it’s an amazing time to be a Demonology Warlock and their army of minions. The dungeon alone gave me around three levels due to being rested, having two quests to hand in and just the completion of the dungeon in general. Fun times. 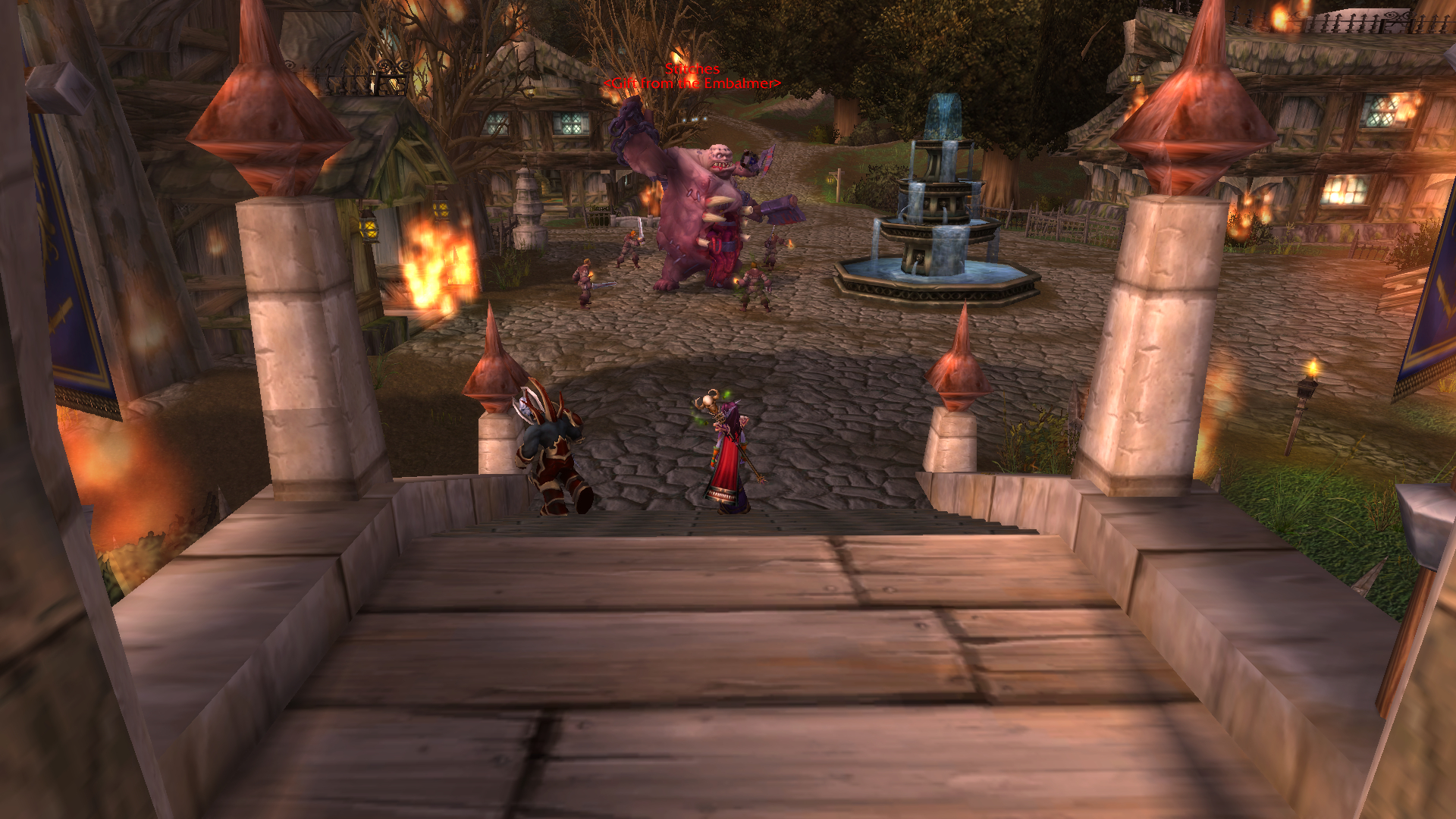 Back in Duskwood I unleashed the monstrosity Stitches unto an unsuspecting Darkshire. Honestly it’s that I get a good chunk of experience from this quest and a nice piece of gear, otherwise I would let Stitches have it’s way with the town. Who doesn’t like sitting back and watching a sewed up undead monster wreak some havoc around unsuspecting townsfolk? I’m always a little intrigued how the creature seems to light the whole town on fire without actually carrying a torch. Maybe the buildings just spontaneously combust when faced with danger?
Anyway, I quickly took care of that menace and then moved on to the west side of the zone that is centered around the Raven Hill hub. Unfortunately I had to take a bit of a break inbetween due to some max level Horde players deciding that terrorizing lowbie Alliance levellers in Duskwood is the best way to spend their Thursday evening and as such I had to wait untill the Flight Master respawned to actually get out of there. Oh well. I guess the time came in handy so I could make myself a nice cup of coffee.

Once in Raven Hill I set about doing various tasks for the hub. One led to an emotional reunion between Jitters and Sven Yorgen, which ended in Sven nearly choking Jitters to death whilst blaming him for getting the family killed. Ah reunions. So bittersweet!
In the meantime killing Morbent Fel all those years back (pre-Cataclyms) apparently had no effect so Sven asks me to investigate what is up and how it’s possible that Duskwood is still crawling with undead while the necromancer responsible for raising them should be dead and buried in a catacomb. Oh apparently I’m also to kill some of the undead and get some bear brains while at it. Righto!
I find Morbent Fel in the catacombs under the Raven Hill Cemetery where he is very much alive. Death was obviously merely a setback. As I kill him again and hand in the quest I only really have one more questchain to go in Duskwood that I picked up around the cemetery and which revolves around killing Mor’Ladim. A cursed elite mob that wanders around the Raven Hill Cemetery area. I took a quick detour to Darkshire, to pick up the quest to kill him, and then went hunting for the mob that usually wanders around the northeastern corner of the cemetery.

After picking a bone with Mor’Ladim the Skeleton and getting a fancy sword as reward for putting his spirit to rest I’m finally done with all the quests in Duskwood. I aided Darkshire and their Worgen problem. I got rid of undead and even attacked a few Ogres to get back stuff they stole. I set loose a terror and killed a Lich aswell as helping the fine folks of Raven Hill. Not bad for two hours work eh?
Next destination? Northern Stranglethorn! 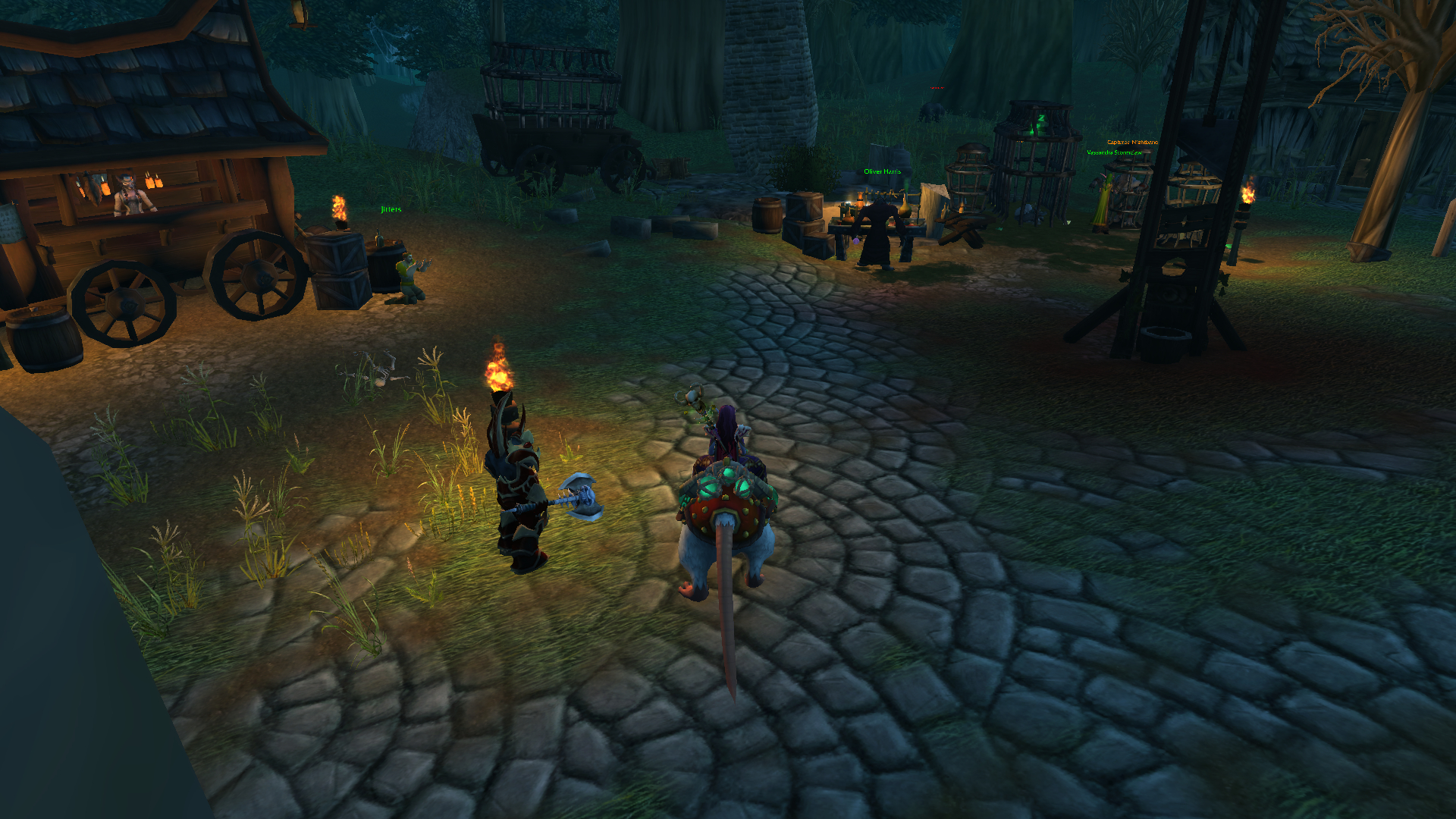