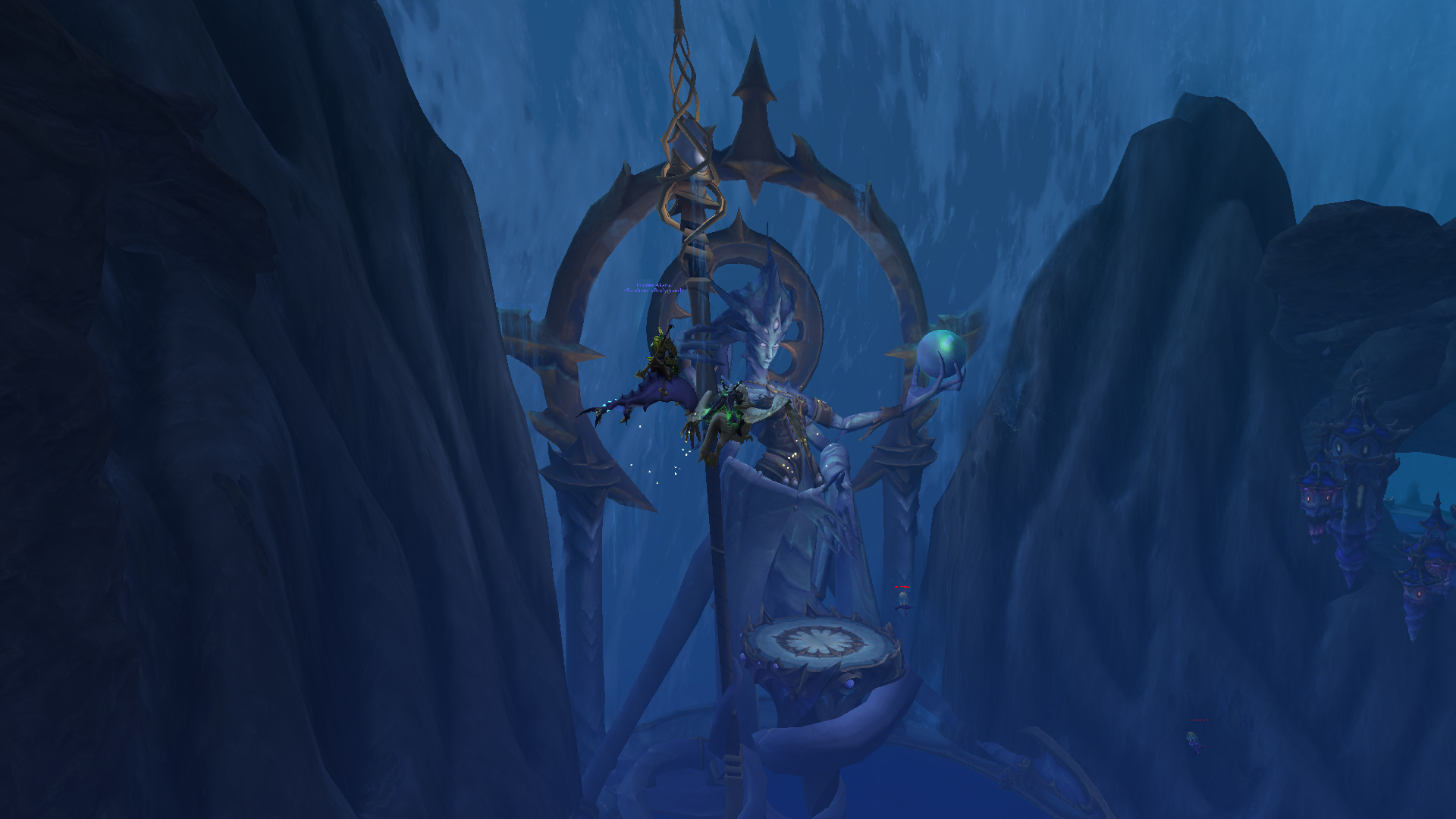 Back to doing dailies in Nazjatar again. I didn’t think I would do this for the second time but here I am. Working away on the story and the reputation. I feel like a masochist and yet I’m also happy to be back online in World of Warcraft and enjoying myself as I again pour too many hours of my time into the game.

I’ve always had a bit of a natural ebb and flow with WoW. I would be very active when I was still raiding until we defeated the current endboss of the expansion on the difficulty we wanted to. Then my attention would wane a bit and I would dial back on playing as much and my focus would go to other things. After I stopped raiding I mainly came back for either the big patch releases and try to catch up on content then or whenever I had a week off so I could pour a lot of time into the game again. Like what I’m doing now.
The guild where I spent most of my time in for the past decade or so has been dead for a while. I think it died out after we killed Gul’Dan way back in Legion. The plan was to get back together again for the next raid, Tomb of Sargeras, but that never happened. People were fed up with raiding, had sudden other social obligations, moved on to other guilds or just disappeared off the face of the planet alltogether. I certainly started playing less and less and when it became obvious that the raiding days were truly done I just stopped caring, untill I set my sights on the Mage Tower challenge which kept me going for a long time.

Because I went into Battle for Azeroth without a clear goal I found it easier to detach myself from the game after initial launch. Of course I did some leveling on my Rogue and later on my Paladin, but that was mostly because I wanted to see the stories of the expansion. I cleared all zone stories, finished the War Campaign and hell even had a super short raiding stint with some friends before I got bored again. I leveled my first Allied Race up to 120 (Nightborne Mage) but after that I kind of lost the will to play. It didn’t help that all the people I used to play with had basically quit and moved on and as such it was a very lonely time in the game for me. Instead I turned my attention back to Final Fantasy XIV and leveling and playing with people there.

Fast forward to a few weeks ago. I was bitten by the WoW bug again, this time mostly due to the 100% experience increase when leveling which made me want to level up another character, my Void Elf Warlock, to unlock more Heritage Armour and because my friends were back to playing aswell. I had a blast being on voice chat with them again as I was leveling up my Warlock and they informed me of their plans to make a guild for Shadowlands and to make it a raiding guild with mostly friends and family that they would control. And it made me want to jump back onto the horse again and be part of that. I knew I wanted to get back to my Warrior again aswell so I also made the decision to finally pull her out of the dead guild she was in for the last 10 years and transfer over to Ravencrest where I now reside. So far I have no regrets. I’ve been doing dungeons and dailies with a group of people again. I’ve been having a lot of fun talking to people on voice chat and in guild chat. I feel like I’m part of a little community again and it does me so much good. I really needed this to come back to the game and I hope it will last for a while yet.

It has also caused me to decide to get a bit more serious about playing my Warrior and as such invest resources into her again. So I’m running Horrific Visions to upgrade my cloak. I’m doing dailies in Uldum and the Vale of Eternal Blossoms to get my reputations up and unlock more essences for my gear. I went back to Nazjatar to work on those reputations aswell so I can upgrade the essences I’ve bought. I’ve dived headfirst back into the grind and so far I’m enjoying it, even if it is a bit much to handle here and there. I’m mostly bothered by having an overflowing questlog. As such I’ve tried to make some priorities. Dailies in Uldum, Vale and Nazjatar are a prio since I need those reputations. The four world quests daily comes next. Other than that I still have a ton of content to work through. Two zones full of quests on Alliance side. The War Campaign. The story in Nazjatar. Mechagon. The list goes on. I’m tackling every aspect, mostly because next to giving me peace of mind it also gives me a ton of gold.
As such I’m going to designate weekends to activities. This weekend I want to finish the War Campaign, front to back. I’m a good chunk of the way there, finishing almost everything in the original chapter. I hope I can finish all of it before tomorrow night. After that I think I want to start tackling the rest of Drustvar. I did a few introductory quests on my Warrior since I wasn’t 120 by the time I finished Tiragarde Sound so it feels natural to just continue there. All small chunks and all pretty doable if I just want to pour in the time. And right now I’m more than willing to do just that. 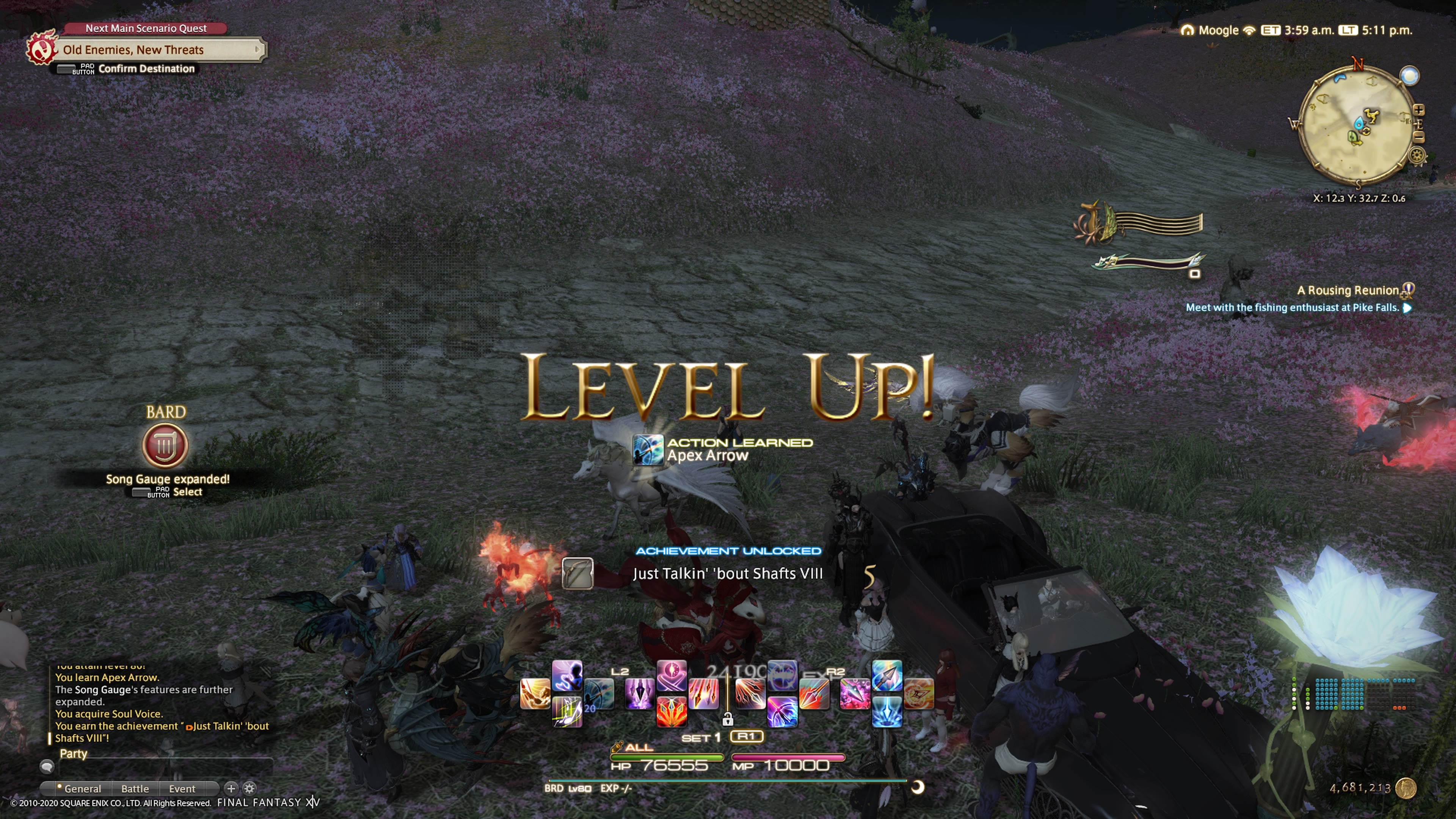 In some other news. I finally managed to get my Bard to level 80 in FFXIV. I did it mostly off pixie dailies and Trial Roulette for the last two levels or so but I’m finally there. Now I just need to level four more jobs before I get that very cool mount and title, signifying I got everything to max level.
Hatching Tide (FFXIV easter) is running aswell right now and I haven’t done the activities just yet. I’ve been told that the event is a two part one where the second part unlocks tomorrow. I’m planning to tackle the first part tonight and then see what the second has in store for me tomorrow night. I’m also going to start leveling my Machinist and will probably do what I did on my Bard for the past couple of levels: Trial Roulette and Pixie Dailies. They take very little time to do which means I can get experience in while only playing for 15 or 20 minutes. I could do more but since I want to dedicate most of my time to WoW this is a perfect little compromise.

All in all I’m back into full MMO mode. It’s taking away time from single player games, although I still make some time for Animal Crossing, but for now I’m happy where I am and what I’m doing with my time. Let’s hope I can keep this up when I go back to work next week because it’s doing a lot for my mental health right now and I don’t want work exhaustion to ruin it for me.