When I got home from work yesterday I just completely crashed. Went to bed, got woken up for dinner, went back to bed again. Woke up around 22.00 feeling groggy and realizing that I hadn’t even called one of my best friends to wish him a happy birthday. Yeah. I was THAT tired.

Due to this I obviously also didn’t post, which is lame because I feel like I messed up Blaugust right from the start. Then again I hope to grind out two posts today (one in the morning, one in the evening) to make up for it so I can still say I posted one post “every day”. It’s really not that hard to write, but if your body and mind just work against you and the only thing you want to do is sleep it’s really hard to focus on other things.

As far as this post goes, I’d like to take the opportunity and rant a bit about Bard gameplay in FFXIV. I don’t like it at all. I loved the 2.0 Bard. Although damage may have been slightly bad it still gave me the Hunter Archetype to play that I know and love. Now with Heavensward Square Enix turned Bards into semi-casters, completely taking the fun out of the class. If I wanted to cast stuff I would go Black Mage or Summoner, not Bard. It’s really annoying too that you have to work with an immense amount of cooldowns and somehow have to weave those in between casts. It’s losing me tons of DPS time and honestly, I don’t know how to do it better at all. You can’t really move anymore, if you want movement you need to turn off your Wanderer’s Minuet but then your damage drops. It’s sucky. I don’t want to be a stationary caster. I want freedom to move, I want the old Bard gameplay back! And no buffing their shots/damage doesn’t improve the situation at all. Hell, stuff that I normally breeze through on Ninja like Ex-Roulette, Weeping City and Void Ark take me so much effort to do correctly on Bard that I just more or less have given up on playing the class alltogether.
But Sandrian, you say, maybe you just need to give it more time and practice more and then you’ll get better! Ofcourse that is probably the solution. The thing is, I don’t really have the time to practice the class a lot. It’s not something I would want to be doing with the sparse hours of gametime I have during the week. I want to be able to run content and not be frustrated about having to play a broken class. It’s annoying, it puts a strain on me while playing and it makes me want to throw my controller through the room. And it makes me sad, because I used to main Bard but now… It’s just a husk of it’s former glorious self.

I really hope that SE will reconsider the class design with the next big expansion. I want Bard to feel natural to me again since it is one of my favourite class types to play. I guess only time will tell.

After dinging 58 this week on my Bard I got my ass in gear and picked up the Bard quest where I left it and landed at Moghome. Curious to see the ending to the search for the Ballad of Oblivion I pushed my Bard hard this week… And managed to ding 60 tonight! 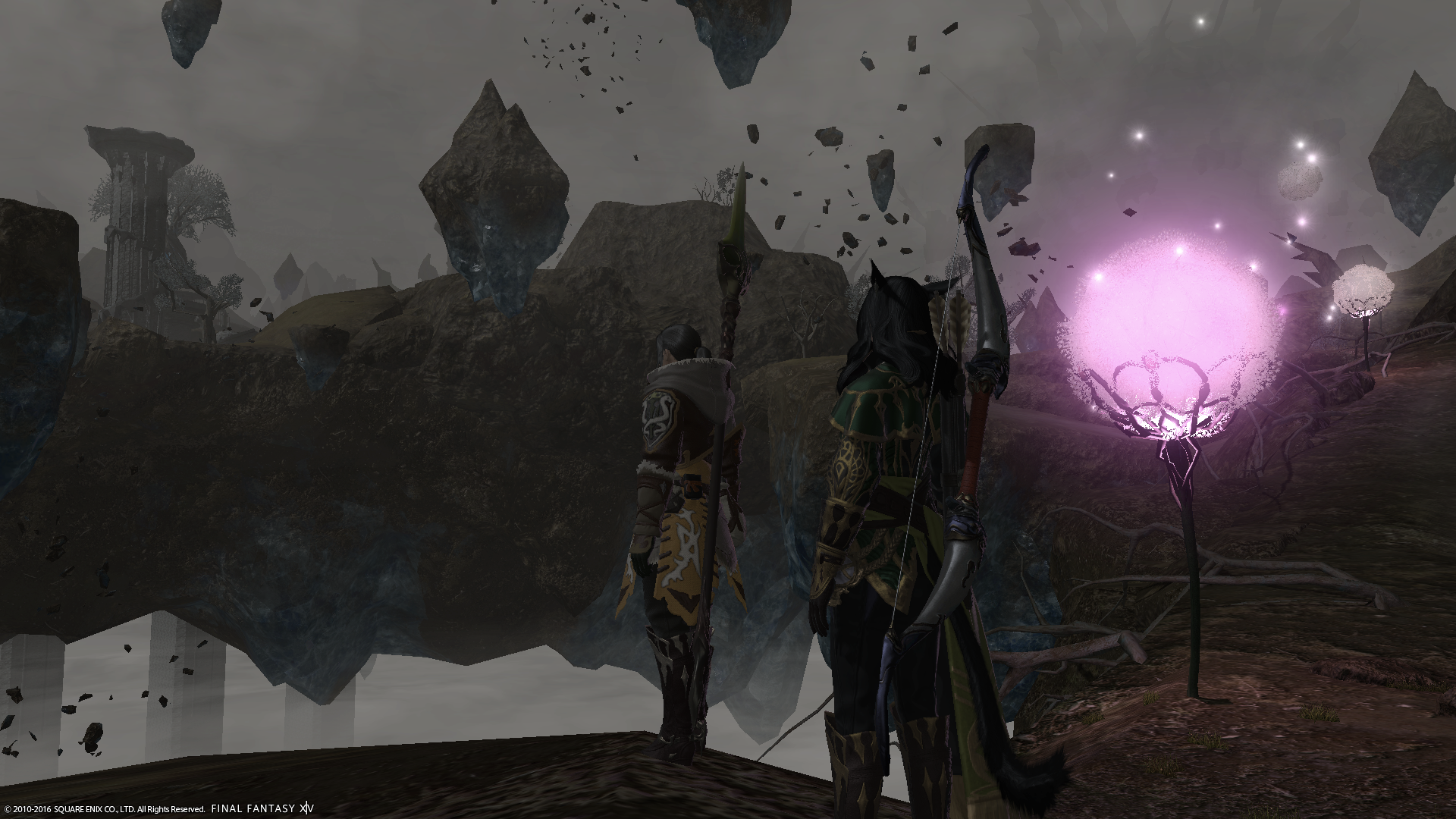 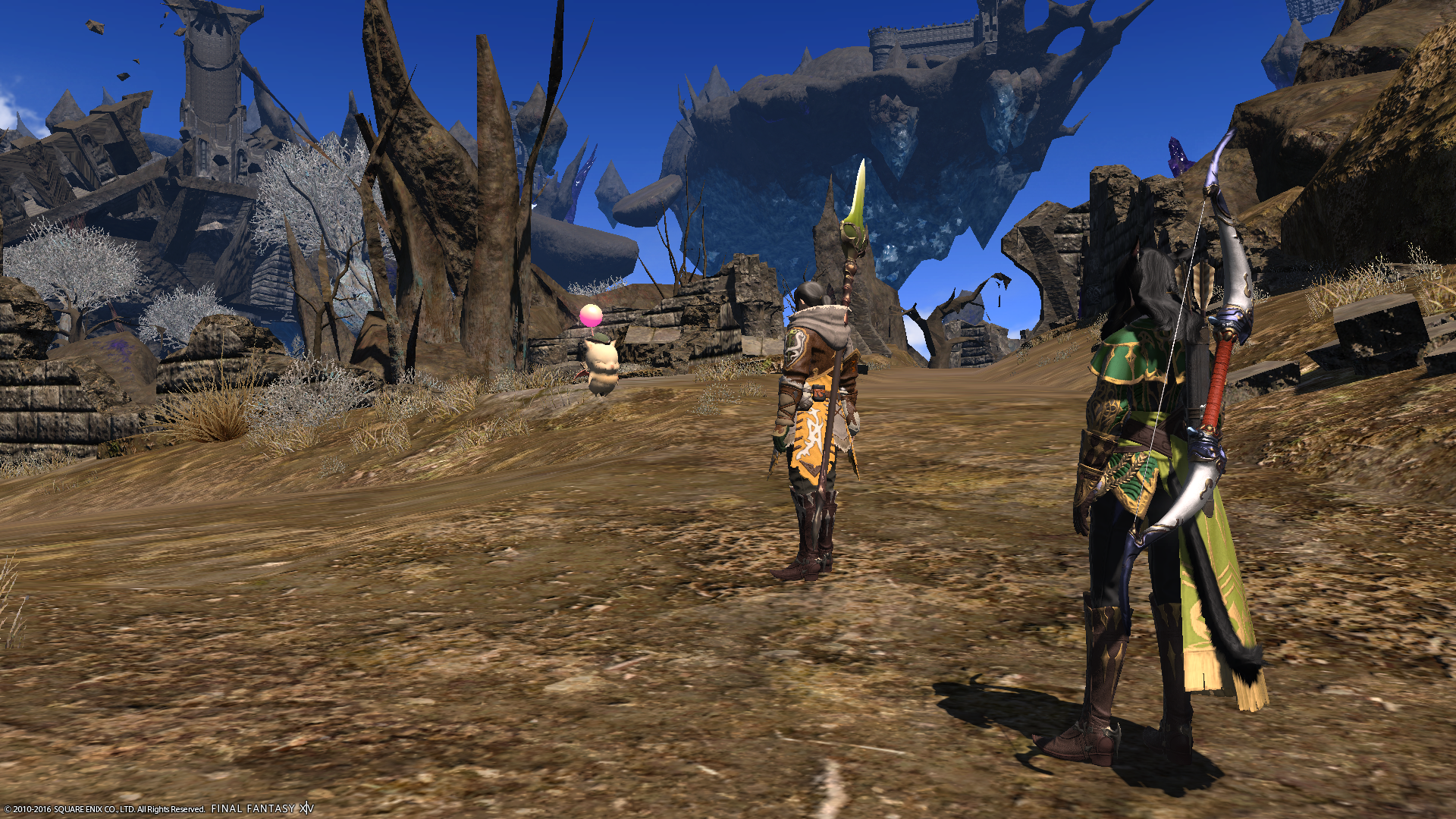 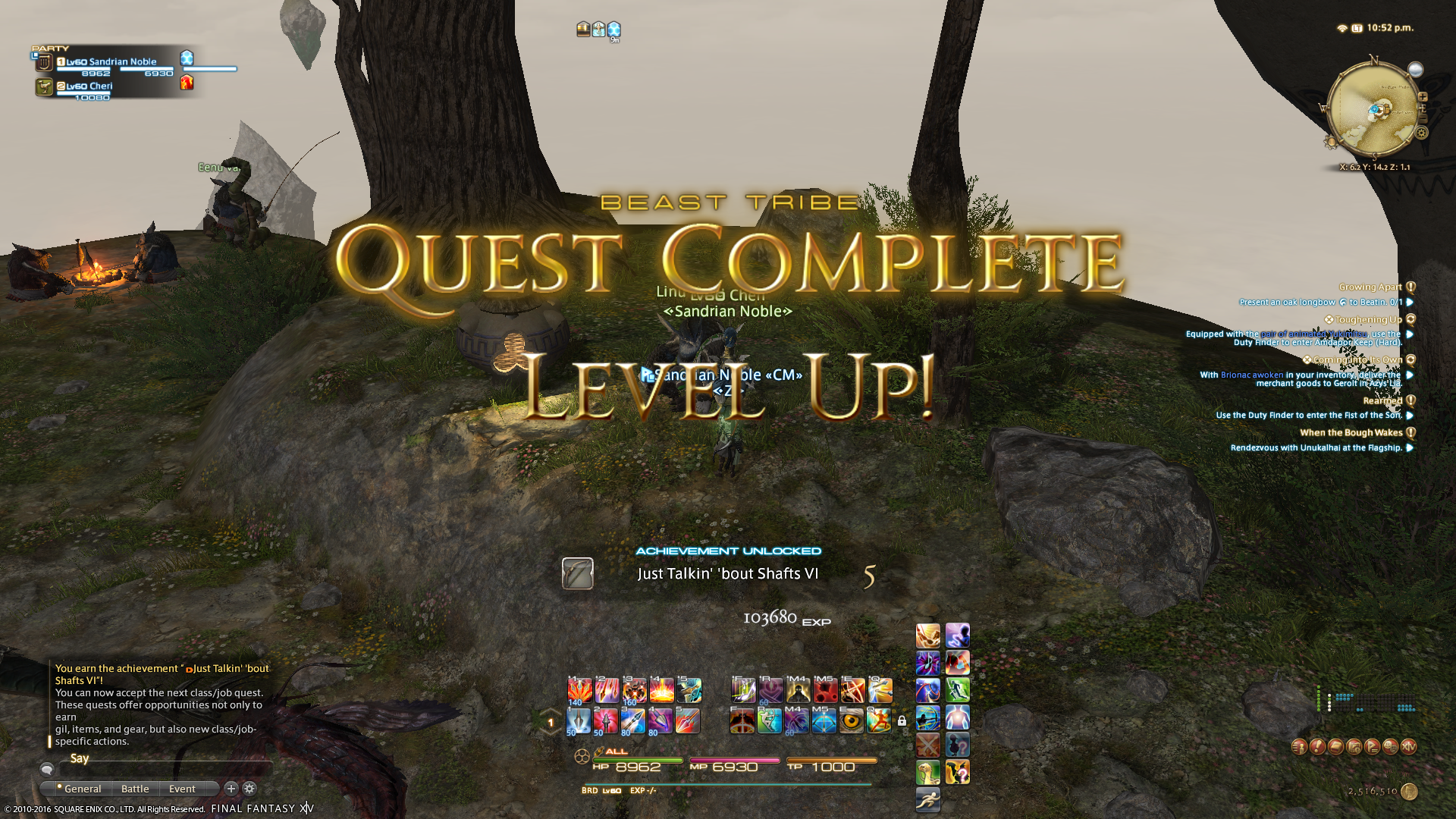 After I dinged I set out to complete the level 60 Bard quest. Where we were pitted against a harpy (of course). 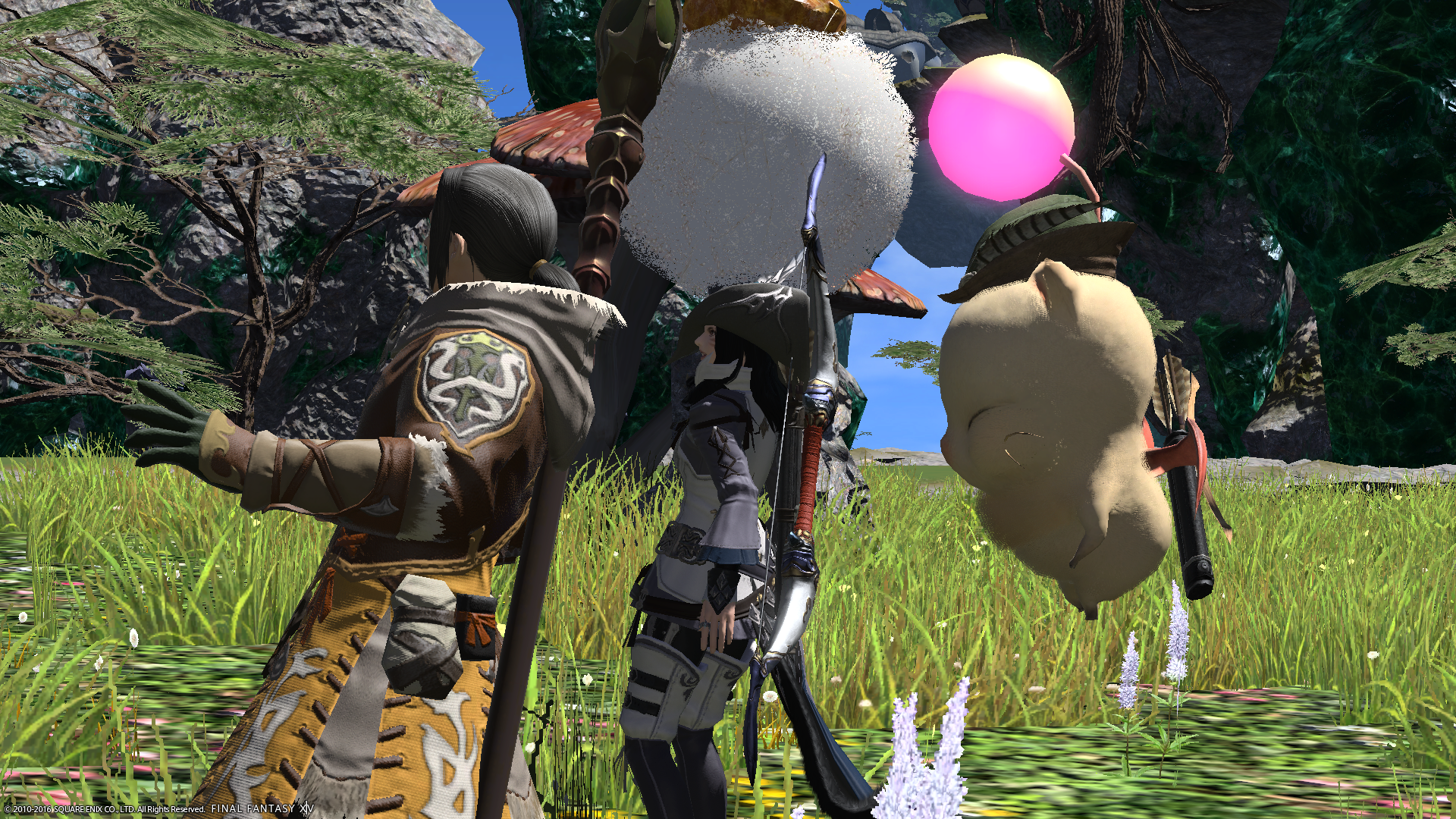 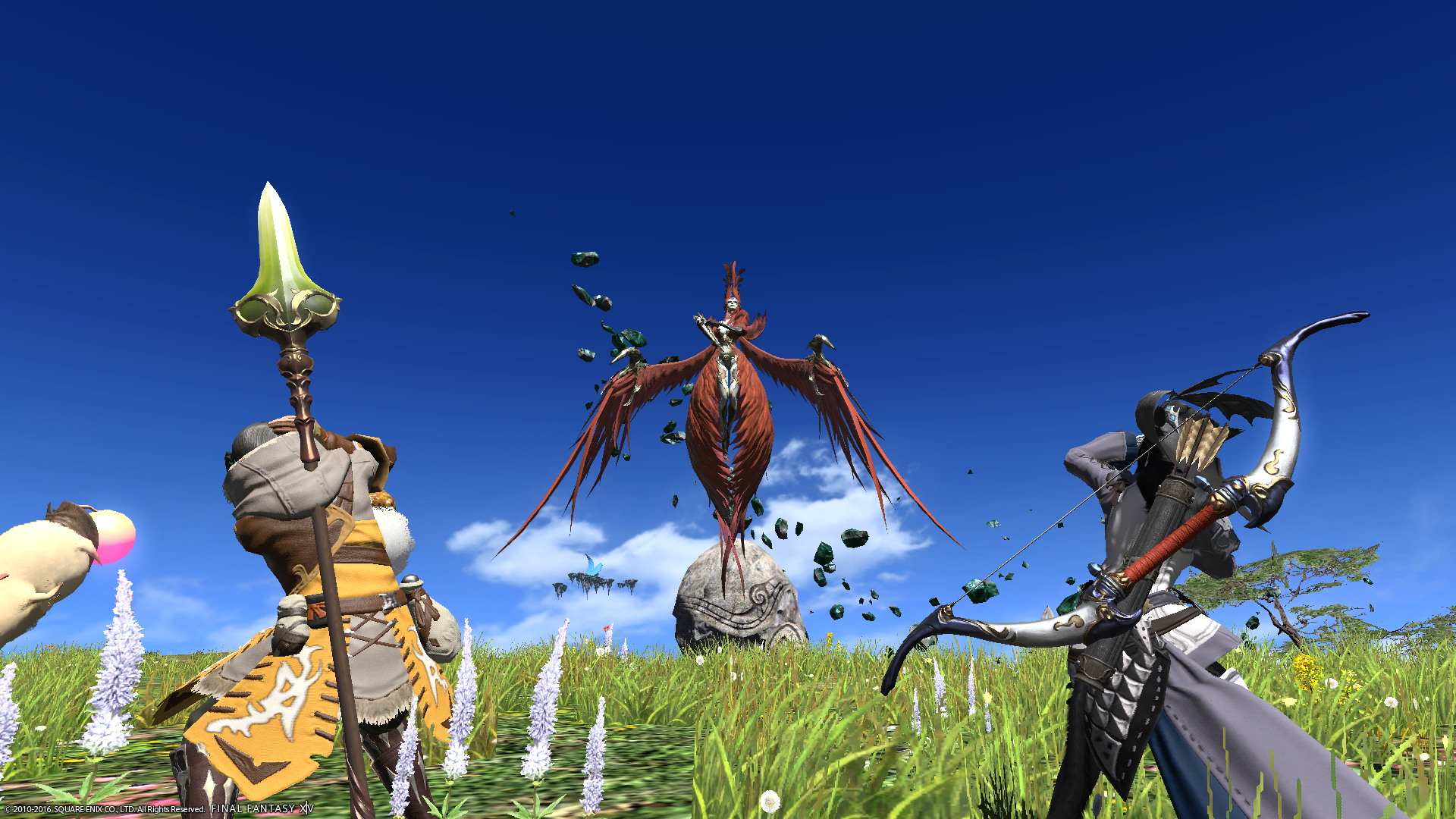 And where Guydelot comes to “save the day”, telling us instead of looking for the Ballad of Oblivion, we should write our own about how we killed this particular wretch.
Needless to say, she didn’t like us much. 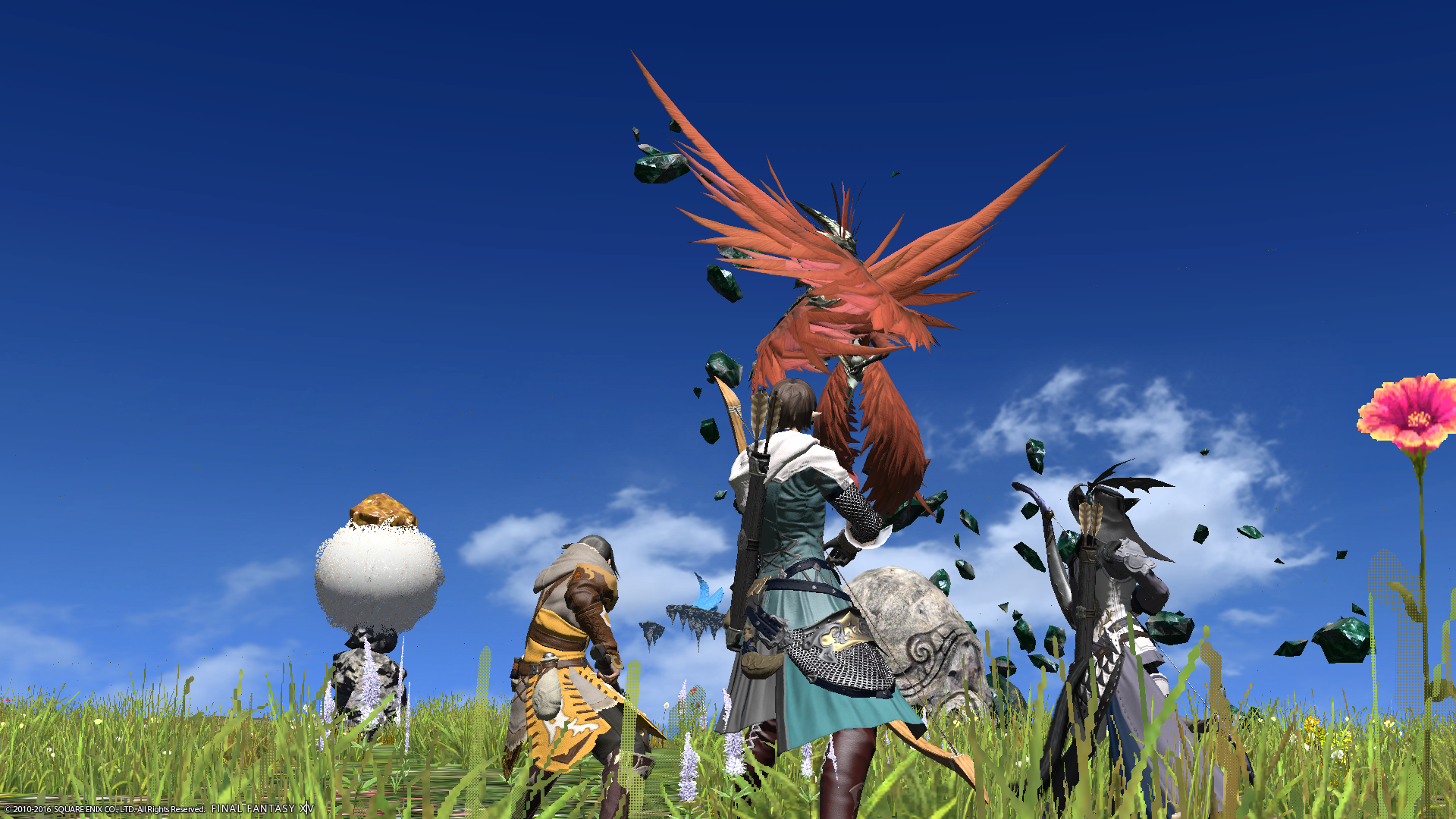 After all of it I finally got my last Bard skill: Sidewinder. And the achievement for completing the level 60 Bard quest! 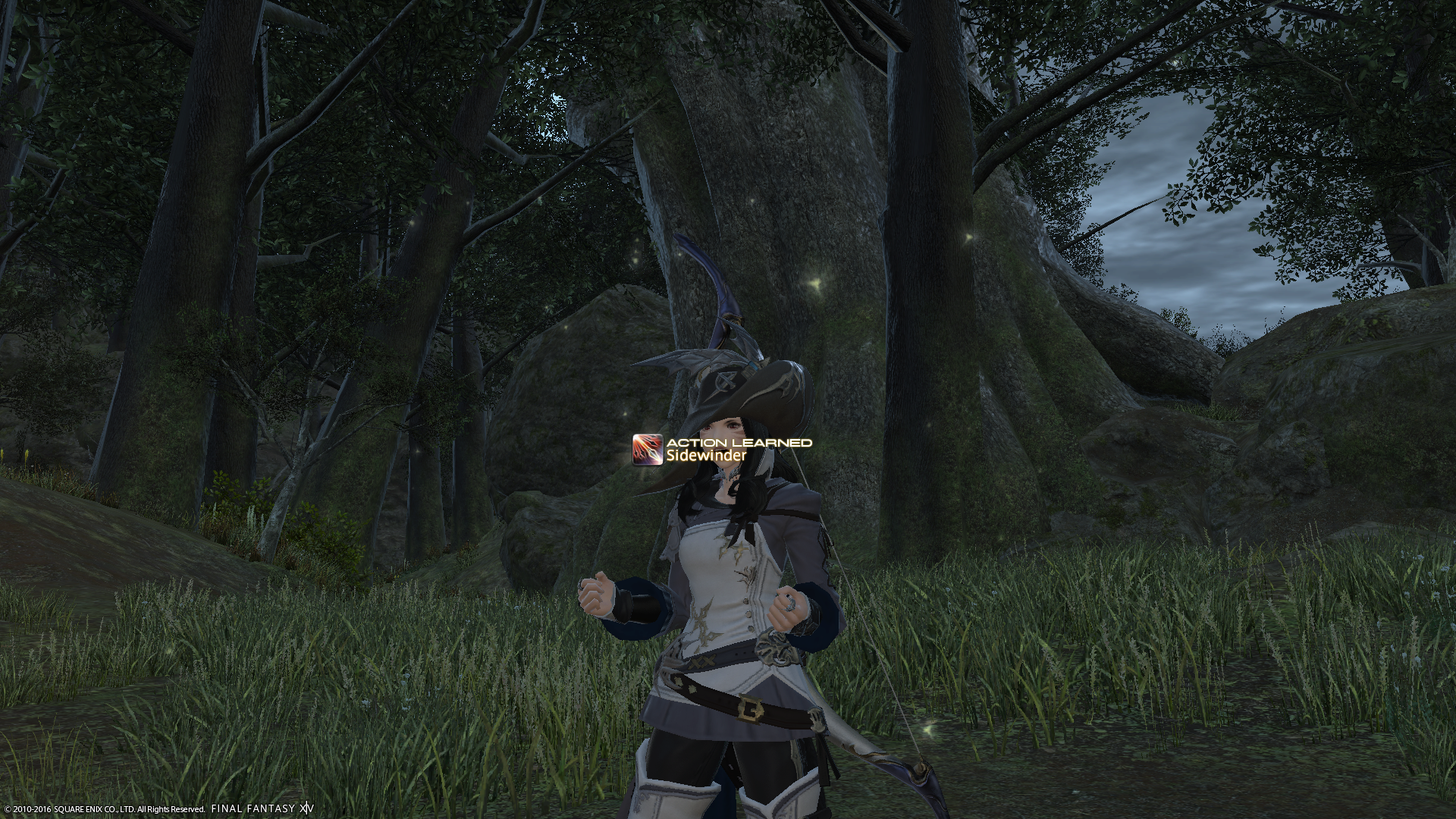 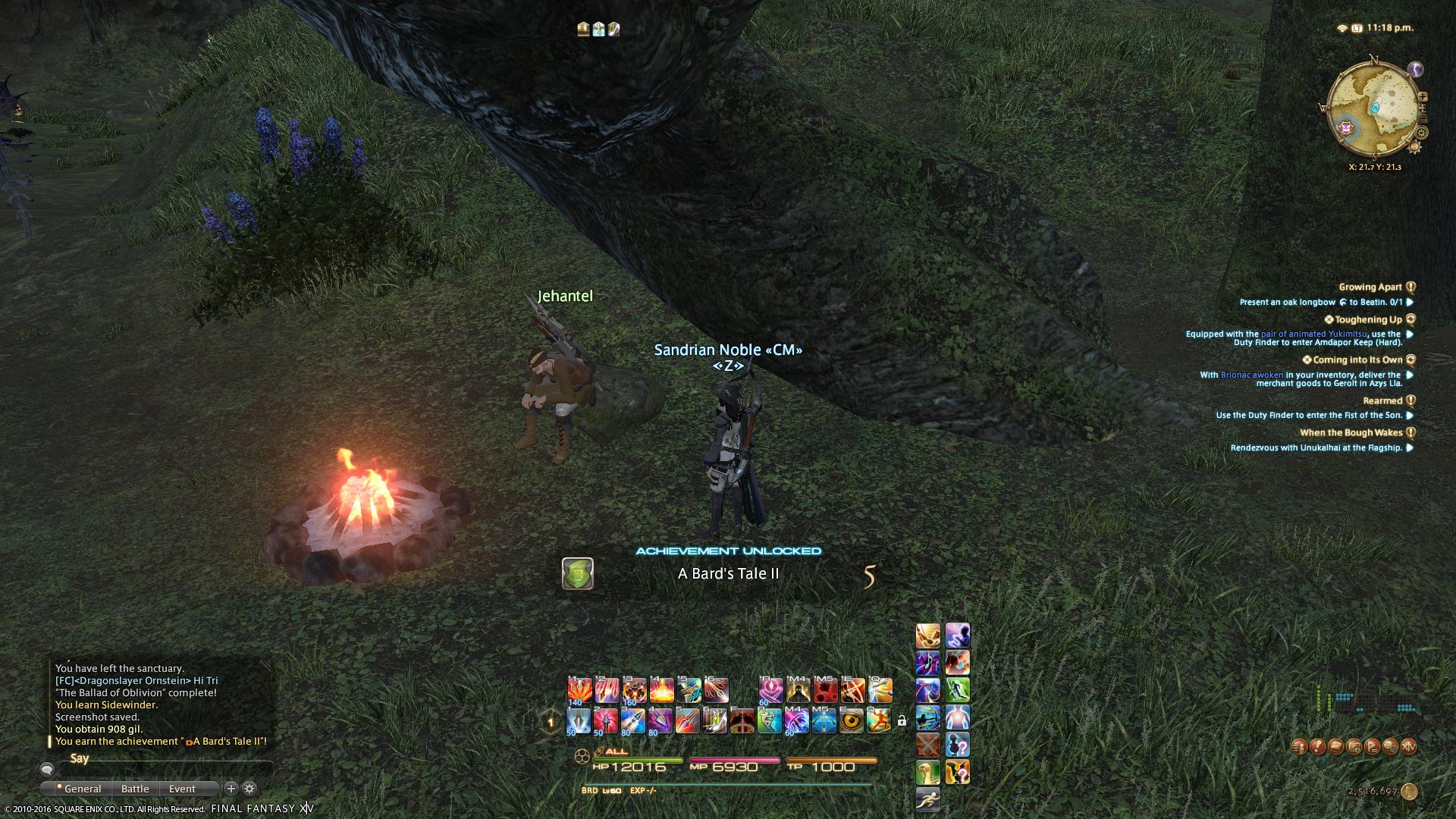 This is now my third class to level 60 and so far I have to say I’m a bit disappointed in the route Square Enix has decided to take on Bard. They effectively turned them into casters, basically “forcing” us to use Wanderer’s Minuet when we are able to stand still on a fight. Although I’m sure I can get used to this new type of gameplay (switching in and out of WM according to fight needs), I’m not too keen on having my mobility taken away on a hunter type character. I’ve always loved the hunter/archer archetype and I feel like I’ve become some sort of melee mage now. Nevertheless I kind of enjoyed the Bard story to 60, my search for a non-existing song and the five new abilities I have gotten.

Also I totally need to show off the Dravanian Set of Aiming, which are dungeon drop items from the new Ex-Roulette dungeons: Lost City of Amdapor (Hard) and The Antitower. Don’t I look absolutely amazing with my hat? 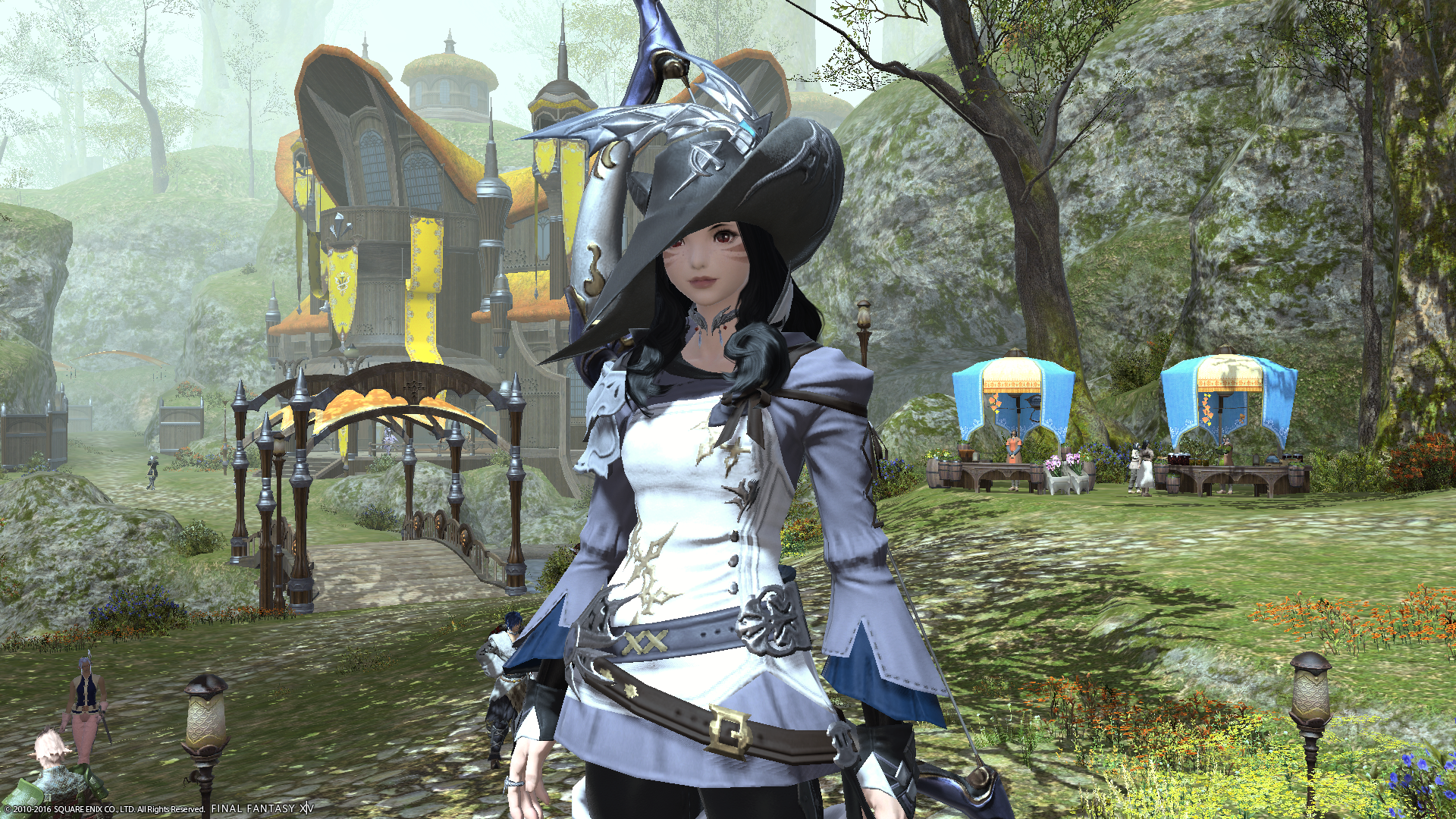 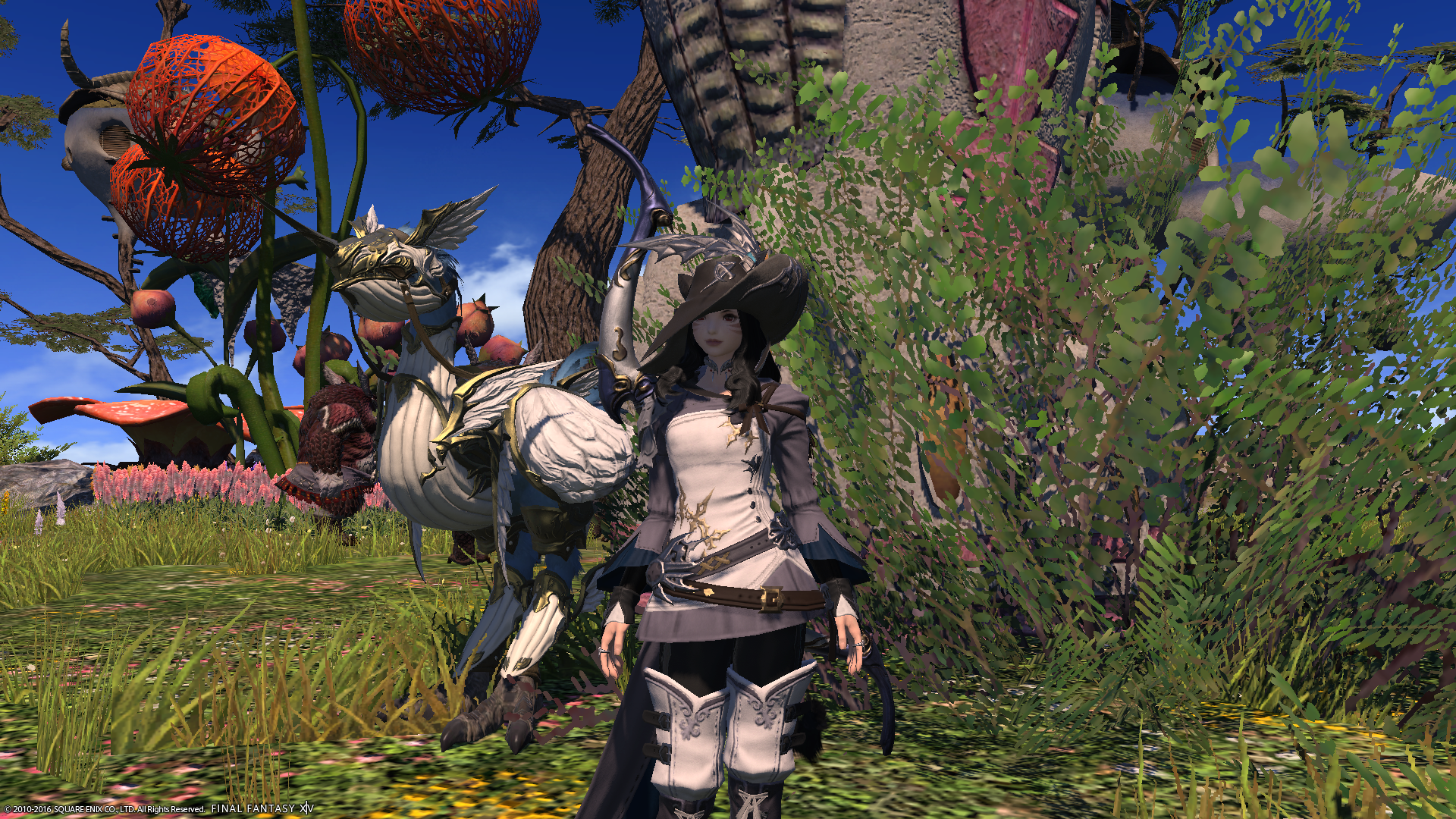