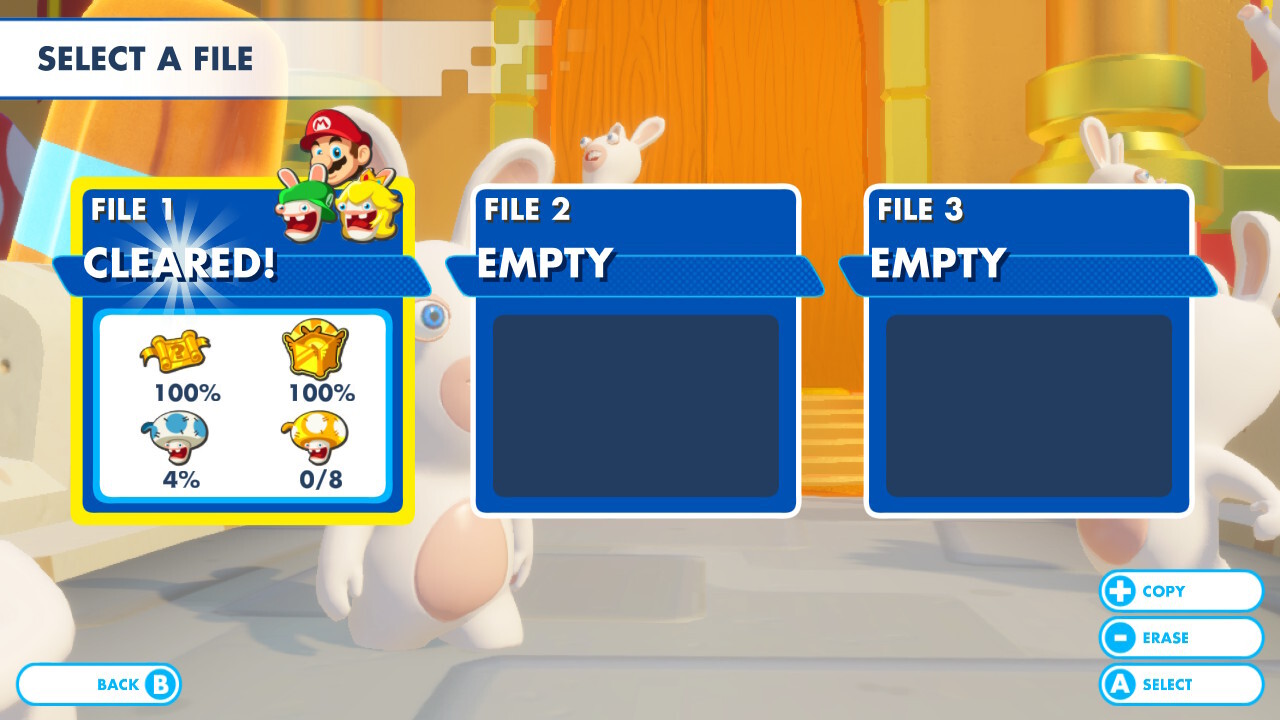 Well. It’s been a while. I have no real excuses of why the blog has been dead besides that I just didn’t have the motivation to keep up with it. But I wanted to share with you guys some of the games that I have been finishing over the past few months, beginning with this one: Mario+Rabbids: Kingdom Battle for the Nintendo Switch.

I don’t even remember when I bought this game, only that I’ve had it sitting on my shelf for a while, waiting to be finished. I think I may have picked it up on a sale somewhere or even paid full price not long after it came out. It was at least one of the games that I had started playing but stalled out in and never picked back up.
I think in my first play through I got stuck somewhere in the second world (out of four, excluding the Donkey Kong DLC) and even though I had a ton of fun with the game I put it down and didn’t look back for a long time. Queue the sequel being announced a couple of months ago and I suddenly got the urge to play the game again. I mean, I did have fun playing it and if I could just get myself to sit down and play a few levels every day I would eventually see the end of it, right?

So that’s what I did. I started a fresh file, seeing as I couldn’t for the life of me remember the story or the mechanics, and set out on a mission to clear at least the main story of the game and the main story of the Donkey Kong DLC. What followed was a 30ish hour playthrough where I completed the main story and went back to get some of the extra things done aswell. As you can see on the screenshot at the top of the post I managed to clear 100% of the levels and I found 100% of the chests in the basegame. In the Donkey Kong DLC I managed to clear the main story and find all the hidden puzzle pieces, but to get all the chest I would have needed to do challenges and I wasn’t up for that so I let it be.

Overall I enjoyed the game. The story was simple but with a lot of hidden gems and humour. The Rabbids weren’t annoying at all but seemed to fit perfectly in the Mario universe. The fights weren’t too hard, although I do have to admit that I used the “easy mode” offer you’d get for every level abundantly. Basically that came down to getting 50% extra health at the start of every fight, which made it a lot easier to get through the levels than without. My favourite world overall, and favourite endboss, had to be the third world. I won’t spoil too much but the boss was brilliantly designed and it was by far one of the hardest fights I had to do. I died a lot there, even with the added 50% health. I never really felt frustrated about having to redo some fights, even though some took me a while to figure out.
There were a lot of mini puzzles to complete and hidden parts of levels, or entirely hidden levels, to explore. The music in the game was amazing and the bright colours just made everything super appealing visually.
I didn’t go back to do the challenges because I was kind of burned out after those 30 hours of playing and I know there’s also a separate co-op campaign to do. Both aspects of the game that I may want to revisit later down the line.

I’m happy that I’ve managed to play through the main game and the DLC in a relatively short time span. I didn’t feel the need to put down the game and not return like I did in my first attempted playthrough. Maybe it clicked better this time around. I’m looking forward to the sequel release next year, although I will probably hold off on buying that until it drops in price. I still have more than enough other games waiting for me to play, but it’s nice to get some crossed of the list. Finally.