Since yesterday evening or so I decided it was time to start working on my gatherers and crafters in FFXIV to break up the monotomy of just running roulettes and doing beast tribe dailies. Since both my miner and my botanist were the most advanced in level (next to weaver) I decided to tackle them first. I had gotten both of them leveled up to level 56 somewhere before Stormblood hit and then kind of let them rot. I never really got into the crafting and gathering game and the whole scrip farm blew right past me. I have no idea what Fokelore books are or when to buy them, I have no idea about Best in Slot or whether or not to pentameld and I certainly have no idea how to combine everything into becoming a crafting and gathering “god”. 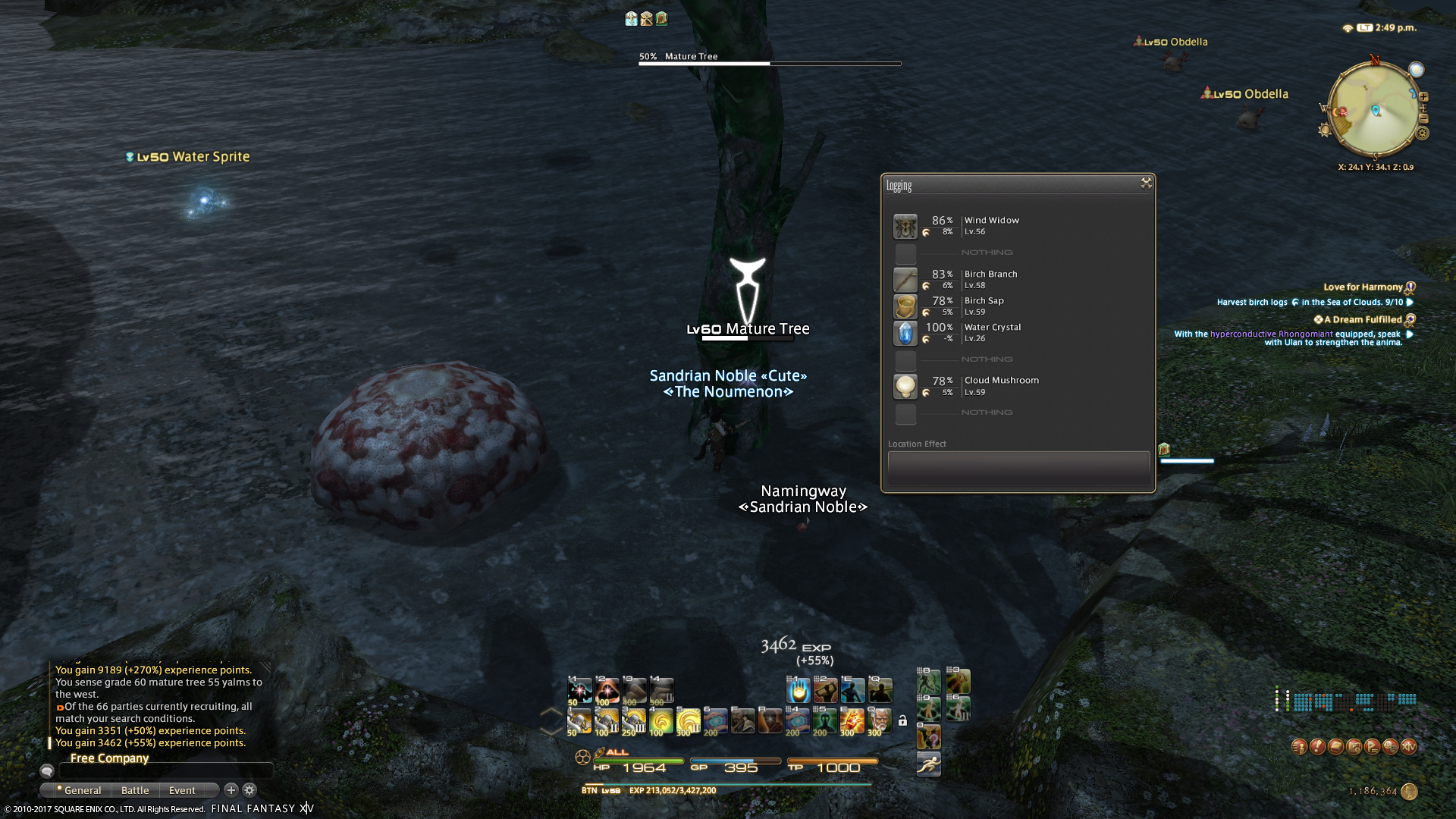 So yeah. I bit the bullet and started leveling both classes again and I have to say everything goes better than expected. I have already brought my botanist up to level 62 and my miner is sitting just shy of level 58. I really want to get this Heavensward part of the gathering process out of the way, mostly because it’s quite tedious and it’s old content. I know there are probably some materials still useful from there and if I would do a bit of market/markeboard research I’m sure both mining and botany can be turned into quite profitable jobs to have. But for now I do none of this, I’m focussing on attaining level 70 first and foremost and after that I’ll see. I still have all my crafting classes to get up and also fisher, but I don’t really want to think about that.

One of the ways that I’m making this leve grind, because that’s the route I’m taking right now just spamming levequests, bearable is doing it to good music and making sure that I take regular breaks. Repeating the same levequest 3-4-5 times over is really boring and I can notice I’m zoning out hardcore as I’m doing all this gathering… And that’s just the leves. The classquests that Square Enix throw at you at certain levels are an even worse nightmare. I have to admit that I bought the items that I needed for the level 60 botany quest off the marketboard. I really didn’t want to spend that much time waiting for a specific node to pop and then praying that I can get HQ items from said node, which is never a guarantee. Especially when you’re sitting in shitty gear like me.
The shitty gear is something that will be staying for a bit because I’ve never done endgame and I’m just really dependant on whatever happens to be on the vendors and at the mercy of the crafters in my guild. Luckily they’re nice people and they whipped up a few gathering accessories for me that should last me a while..

I’m really wondering how the gearing process looks like for gatherers at max level. I saw that you could essentially buy a level 70 set of the vendors but I’m sure that scrip gear is better. M’naago should really help with this seeing as she’s the new Zhloe. Not having a weekly cap on scrips is also extremely helpful so in theory you could be geared in “no time” when you ding 70. I just hope that I can stay interested in this gathering spree untill then.

Another thing that I would like to do (even though I’m waaaaay to late really) is work on the various gathering related achievements. The rewards may be outdated but a golden pickaxe and botany tool still look really pretty so I might just do it for the glamours. It really comes down to just doing the gathering log for both classes and spend a ton of time gathering in the old continents. At heart I’m a collector and achievement hunter and it would fill me with immense accomplishment to just start ticking off “easy” to obtain achievements. Because while logging 1000 times from 21-30 nods in the various regions seems like a huge task, it’s really just tedious. I can’t really be attacked by wildlife anymore because I simply outlevel them, it’s more a question of careful planning and executing. Going for 1000 gatherings in one sitting is pure madness so I figured I’d break it up in chunks of 40. The average amount of gathering attempts is 4 and you’d have to do 10 nodes to get to that number 40. This way I can just keep track of what I’m doing and decide when to take breaks. Every 10 or maybe 20 nodes. Just to keep myself from going insane.
Next to that I want to “complete” the gathering log for both miner and botanist. Again this awards with a slightly outdated primary tool, but it’s pretty and it’s an achievement to work towards. This one will be a bit more difficult seeing as some of the stuff is locked behind timed nodes and I will have to figure out how everything works exactly, but I’m sure I’ll get there.

With dedicating even more time into FFXIV I will probably not be working on my backlog after all. I’m making this choice conciously right now. I just can’t seem to find the motivation and time to really play anything else anyway and the only game I’m really enjoying besides FFXIV right now is Super Mario Odyssey, which has turned into a “find all the moons” grindfest aswell. Maybe the release of Pokémon Ultrasun next week will change my mind, but for now I’m 100% focusing on FFXIV and obtaining as much as possible in there.

2 thoughts on “Gathering up a Storm”