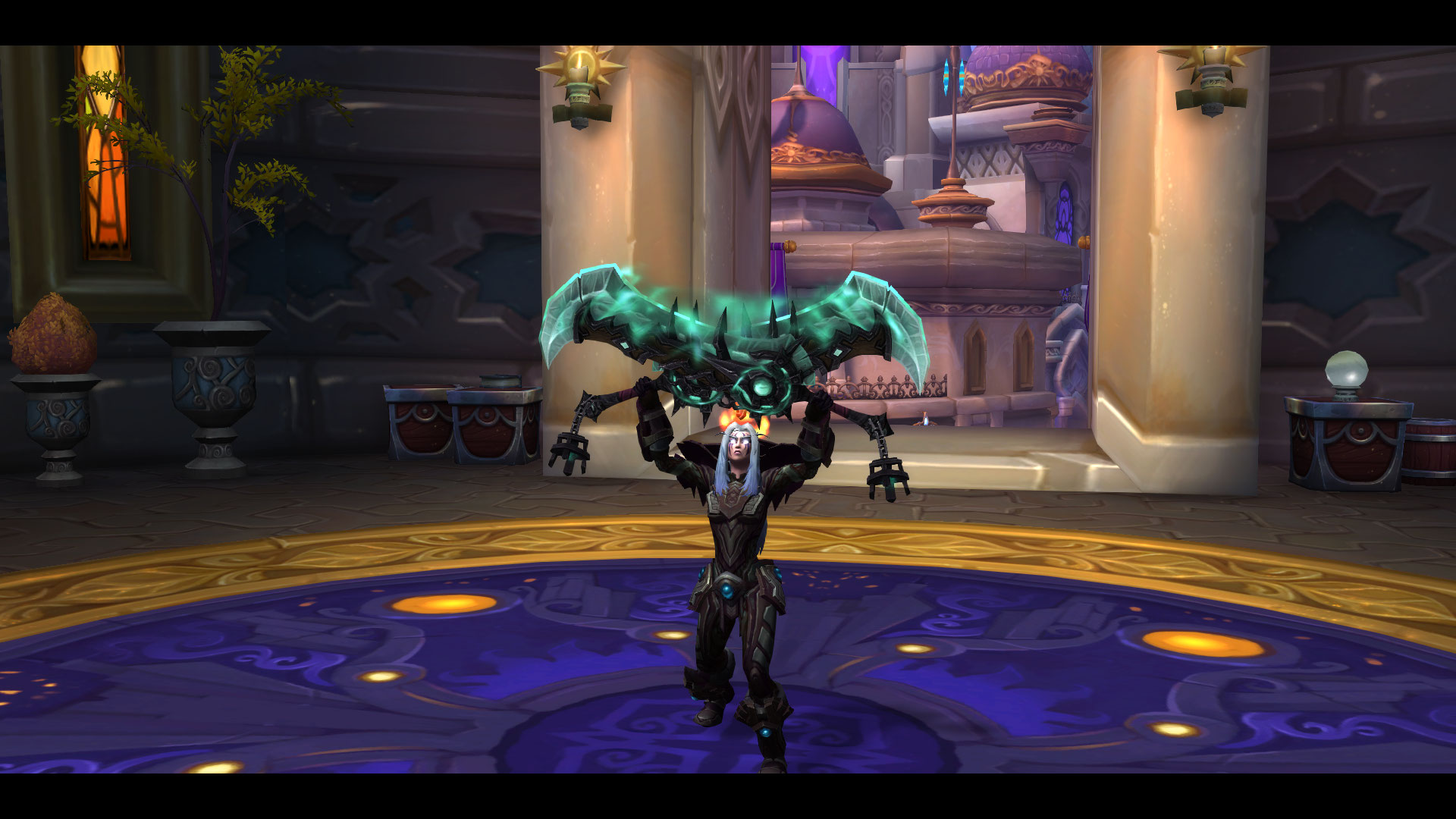 I’ve been addicted to World of Warcraft again. After not playing for most of Legion I’ve jumped back in again for the past few months and started a grind that seems to be nigh impossible, yet I want it done badly.
It all started with me making an overview of the things I have already obtained in Legion, on what characters and what I’m still missing. As I write this post I am down to three classes left to level (Warlock, Death Knight and Rogue) and I have obtained a boatload of Artifact skins. Getting seriously back into WoW has been a mixture of circumstances. I’m currently playing a lot on the Horde side with one of my best friends aswell as trying to get that Mythic+ 15 done on my Warrior on Alliance side. I’m actually having a lot of fun again and only play with the people I want now. Couple this with a severe decline of interest in FFXIV, Eureka has been a serious disappointment for me, and I find myself on Azeroth a lot once again.

One of the things that has me pulled back into WoW, next to playing with the right people and an immense collectors’ drive, is the fact that I can make progress towards something on any character I happen to log and don’t need to spend a lot of time doing it. Aside from the Mythic+ madness I’ve been solely focused on leveling all my classes to max level, do their class hall campaign, unlock the class hall mount and grind out Hidden Artifact skins. On top of that I finally managed to get my first two Challenge skins (the Fury Warrior one pictured above) and I feel like I can actually get done what I want to before Battle for Azeroth hits. In FFXIV if I want to level my Machinist I will have to queue up for roulettes because doing only the six available Beast Tribe dailies every day is too slow. In WoW I’ve been doing invasions, which grant atleast a level and take about 15-20 mins to do, aswell as just doing the main story line in the zones. I can literally play for 30 mins and make progress. In FFXIV that’s usually the time it takes for me to even get into a dungeon.
Even though WoW is a bit more chaotic at endgame, seriously Blizzard needs to stop throwing all these quests at me as I ding level 110, it’s also somehow less time consuming to get what you want, granted you need to plan very carefully so you don’t get sucked into the game and waste three hours doing nothing, which is something that tends to happen in MMO’s.

I’m chunking up my WoW time effectively, dividing it towards what I want done for the day and making sure I get it done aswell. Sometimes this entails running a Mythic+ or two for gear and progress towards getting the +15 on all my characters. Sometimes it’s doing a few quests in the Legionfall campaign so I can unlock another Class Hall mount. On my Warrior I’ve been diligently doing all my Emissary quests for the caches, but also all the PvP World Quests to edge closer to that new Prestige level. I plan to take my Paladin and my Priest through the Argus campaign in the near future so I can get proper gear and maybe start working towards tackling the Mage Tower challenge on them aswell. I can make this progress in tiny amounts, usually I don’t have more than 2-3 hours of game time a day anyway, and still slowly tick goals off my spreadsheet.

Compare that to running Eureka for three hours and maybe advance an elemental level or two… I feel like I can get more out of my limited game time in WoW right now.
It’s not to say I’m abandoning FFXIV outright, it will probably be my weekend MMO, but I will be playing it a lot less than I was a few months ago. I still plan to get all my classes to level 70, eventually.

For now though I’m working on a rather prestigious WoW project that I hope I can see through to the end: Obtain every Mage Tower Challenge skin in the game and do M+15 on all 12 classes. Why? Because those are the only skin variants (MT base and +15) that Blizzard will remove with BfA. And so I am going to work my butt off to get them all before that happens.