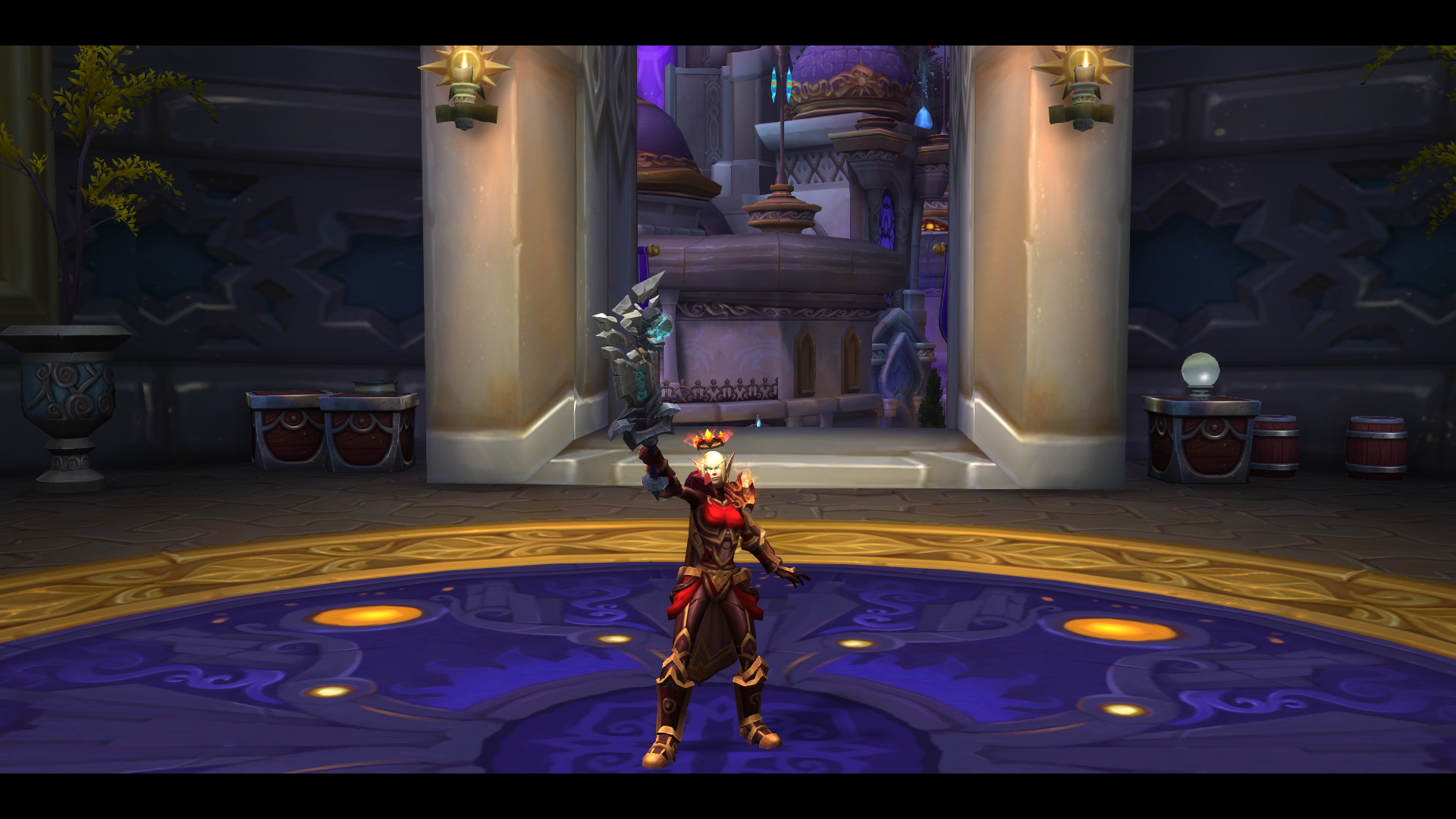 I’m having one of those weekends where I feel like my life is going by too fast and I’m wasting my time doing useless stuff. And with useless I mean lying on bed or spending a lot of time dallying in a game while not really making any progress anywhere.
Which is odd because I’ve been slowly ticking off goals for World of Warcraft (see the above screenshot of my proud Paladin and her Retribution Challenge Weapon) and managed to actually finish a game within a week of buying it. And yet I feel useless and bored, not to mention fat and ugly.

I think my depressive mood comes down to my less than ideal living situation and the fact that I lack the motivation to change anything about my life right now. My house is being built and I can’t move out untill next year. I’m still quite overweight but I can’t seem to get myself to start working out seriously and working on losing that weight. I’m also staring at a contract deadline which basically means I should find a new job by October 1st. Something I really really want aswell but I can’t seem to motivate myself to do anything. I feel mentally exhausted and I’m not sure how to turn it around right now. I think the best thing I can do is focus on tackling one thing at a time and right now my health, and the slow deteriation of it, is my number one priority. Because next to being simply overweight all that extra cushion I’m dragging around is causing me other issues. I’m short of breath, my feet constantly hurt, my back hurts and I honestly look ridiculous in any clothes I’m wearing. Looking at myself in the mirror becomes harder by the day and I’m desperately finding a way to get motivated to lose weight.

I have considered tying gaming and working out together. Especially during weekends I just don’t get enough exercise/movement and so I’m thinking of a system to make sure I do not sit on my ass and game all day. I’ve been trying to apply it to my WoW sessions where I am taking breaks whenever I level up on my Rogue (which is rougly every 45 mins). During these breaks I either go get a drink, clean a bit of rubble from the attic or spend a few minutes just walking around, stretching and maybe walk up and down the stairs a few times just to get some movement in. I want to progress this further and stand on our crosstrainer or do some strength exercises inbetween my gaming sessions. Anything to start getting healthier again and be happier with the way I look and feel, seeing as this body has to last me atleast another 40-50 years.

In gaming land however…
I’ve been scratching off a lot of goals. I’ve completed 8/36 Mage Tower challenges now and I hope to be able to complete three more the next time the Tower rolls around. If I’m able to do that it means I have all the Mage Tower appearances for Monk, Paladin and Warrior and 2/3 for Hunter. Although the challenges still aren’t a walk in the park they’ve become significantly easier by gearing up my characters. I’m really close to getting the MM Hunter challenge done but I’m trying to get a better legendary than the ones I have in the hopes that it will help me actually kill off the stupid challenge. I’ve also picked up leveling my Rogue, who is my last class not on 110 yet, and I’ve made some pretty great strides today going from level 82 to almost level 87 in a few hours of play on and off. From level 90 onward I will be duoing up with a friend and we’ll make the final push to 110 together over a weekend, something we’ve been doing with a lot of our characters.
In terms of gameplay I don’t really enjoy Rogue all that much, there’s a reason why I’ve practically not touched this character since Wrath of the Lich King, but I want to get it to max level for completion sake so I will.
I’m also making a point to log into FFXIV once a week to do some beast tribe quests and to log into my house so that I don’t lose the plot. Even though my interest in the game has been waning a lot I’m not letting my sub lapse because I know I will get burned out on WoW at some point and will most likely return to FFXIV more fulltime then. In the meantime I’m super slowly leveling up my Machinist and just fiddling about getting my Beast Tribe rep up, I’m almost done with the Ananta now which means I can soon buy the pretty Gryphon mount. But since I’m only logging once a week or so it’s been going at a snail’s pace. Oh well.

In non MMO land I’ve bought Kirby Triple Deluxe on impulse Friday the 4th and finished it last Thursday. It reminded me of how much I love Kirby games and how nice and relaxing they are to play. I’ve yet to finish Star Allies on my Switch but seeing as I completely got sucked in by Triple Deluxe I’m taking a bit of a break and focusing on a game in an entirely different genre: Monster Hunter Stories. I’ve only started playing this game today so I’m not that far in but from what I’ve experienced so far it’s MH Light with a mix of Pokémon. It still has the Monster Hunting aspect, you still get a shitton of crafting mats and there’s a ton of sidemissions to do next to the main stuff, but this game actually has a story to follow and the gorgeous, colourful graphics had me hooked immediatly. I feel like this is by no means a simple game, but I’m determined to plant my feet in it and make progress this week and hopefully understand a bit more about how I have to actually play the game and if this may get me into other games in the Monster Hunter franchise.

For now though I’m going to sign off here and hopefully catch a good night’s sleep. I predict a ton of gaming and cleaning in my future tomorrow and I prefer not to have laid awake half the night before that.