A week or so ago I finally managed to get my hands on Donkey Kong Country Returns for my 3DS. Being an avid Donkey Kong fan ever since childhood I was kind of hyped they finally brought out a new game on a handheld, since it’s been quite a while since I have seen a DK game that wasn’t on a console.
Going way back to the Gameboy era I really loved DK way more than Mario. The games itself looked much better and I felt like there was much more to do in the games. Like finding the “kong” letters hidden around every level. It was really hard to actually 100% those games and it seems like they made it just as hard in this new game that has come out.

One of my favourite levels so far has been the one depicted at the top, Sunset Shore, where you basically play with shadows against a sunset. The level itself is quite beautifully designed and in 3D it looks amazing. All of the levels look quite good in 3D and the gameplay is such that you feel like you actually move around in more dimensions than on a normal platform game. All in all I’m very happy with my purchase and it’s keeping me quite busy. I play on the train to and from work, and I manage to do about a level every time so I’m currently in the second world of the game. 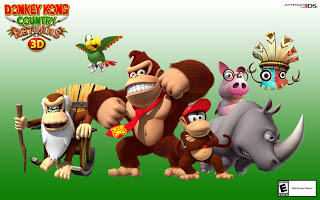 Never really finished
The downside to a game like this, is that it’s evolved beyond merely making your way through the levels. I remember when I was very young and playing on my SEGA that the hard part about the game was actually beating it. You would find your way through every new level and engage a boss every now and then. I remember being stuck for very long on a boss in the Lion King before finally figuring out how to beat it, granting me passage to the last few levels of the game.
This was also an era where save games weren’t a thing, so if you shut down your console for the day it would mean that you had to start over from the start the next day. Ofcourse everytime you beat a level it became easier and getting to the point where you would get stuck previously wasn’t as big of a chore anymore.
These days however, simply beating the game is just not a thing anymore. I look at my Playstation 4 games and see all the thropies you can earn with those. Some are earned simply by playing the game and beating the mainstory, but others require you to do special things… which usually require more than one playthrough of a game. The same goes for Donkey Kong. You can simply make your way through the levels and consider the game “finished” when you have played through the entire story. However…
In every level there are puzzle pieces to find along with the letters K-O-N-G. Getting all of those, plus beating certain times on levels will earn you points towards 100% completion of the game.
Since I’m a perfectionist, and a completionist, it can be very frustrating for me to play these type of games because I actually do want to 100% them… But that will probably take me forever on some games (mostly my PS4 ones). So I’m trying to tell myself that it’s ok if I just finish the mainstory and I can always come back later to earn trophies or really “finish” the game… Which just makes me not play anymore at all after a while. I really want to play through my games though. I usually like the stories and want to see how it ends, so this year I want to push myself to finish story modes… And then I can always come back to 100% it later if I want to.

Minor tweaks
I did a minor tweak on my blog. I found it a bit too narrow for reading so made my two sidebars into one. This should hopefully provide for a nicer reading experience overall, I’m happy with the current design and layout atleast 🙂