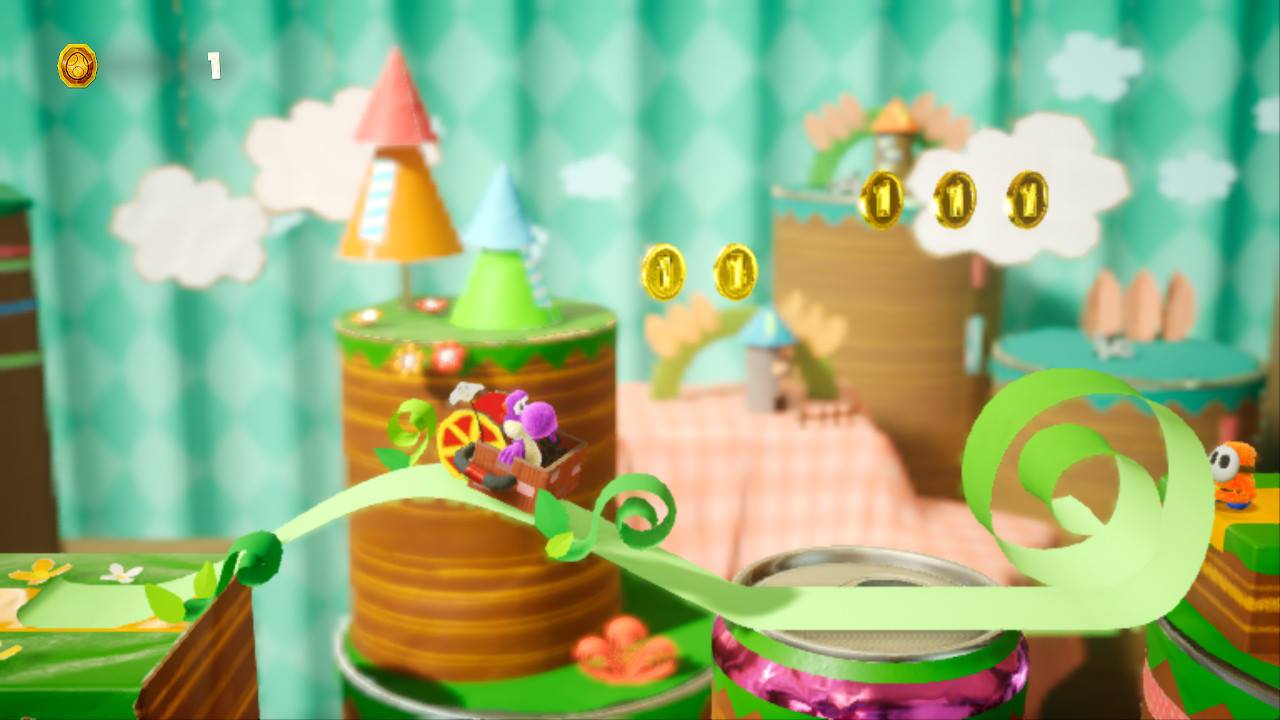 There’s a handful franchises of Nintendo that I really enjoy. Mario is the prime one followed closely by Kirby. However since Yoshi’s Woolly World I have to add the Yoshi franchise to the list aswell. In light of this information it should come as no surprise that I picked up Yoshi’s Crafted World aswell when it came out this week. Unfortunately the Switch screenshots aren’t always that good so my apologies for the one heading this post, I just wanted to give an impression of how the game looked.Anyway I’ve played for a few hours now and wanted to give my first impressions of this game and the things I have discovered so far. I am giving a fair warning now, I am going into some detailed things that I’ve found over the first 2-3 hours of playtime so if you want to stay spoilerfree turn away now!

“Story”
The story like in the previous Yoshi entries is a simple one. The Yoshi’s live happily on their island with the Sundream Stone who makes all their dreams come true. Ofcourse Kamek and Baby Bowser caught wind of this and try to steal the sun stone, breaking it in the process and scattering all the Dreamstones across multiple worlds. You are tasked to find the stones and make the Sundream Stone whole again. Throughout the game you are being thwarted by Kamek and Baby Bowser but you also meet new friends and come across some familiar ones!
All in all it’s  a simple setup, nothing too fancy. It’s a very kid friendly story but that’s something I’ve come to expect from the Yoshi franchise thus far.

Gameplay and levels
The gameplay for this game is the standard Yoshi gameplay. You swallow enemies with B and create eggs with most of them which you can then aim and throw at almost anything in the world. Yoshi’s still flutter when you press A for jumping a bit longer and Yoshi has a ground pound. There’s nothing too fancy about the gameplay, I guess to keep it simple for the kids aswell.
Right at the start of the game you are asked if you want to play the game on “Easy” or “Classic” mode. From what I’ve seen Easy mode doubles the amount of eggs you create when swallowing an enemy and it will let you know when a flower, one of the many collectibles in the game, is nearby. I’ve opted to play on Classic mode myself since the game is simple enough as is so I don’t need it to be even easier. You are free to chose the colour of your Yoshi, there’s 8 total, and you can switch colour any time. As seen on the above screenshot I’m currently playing with the purple variant but I’m thinking about switching to Orange or Lightblue next time I start up the game.

Collectability is a big thing in this game. The levels themselves aren’t hard and you can probably rush through them in two or three minutes but that’s not where this game shines. It shines in the collectibles and replayability of the levels themselves.
On your initial playthrough of a level there’s a few things to collect: 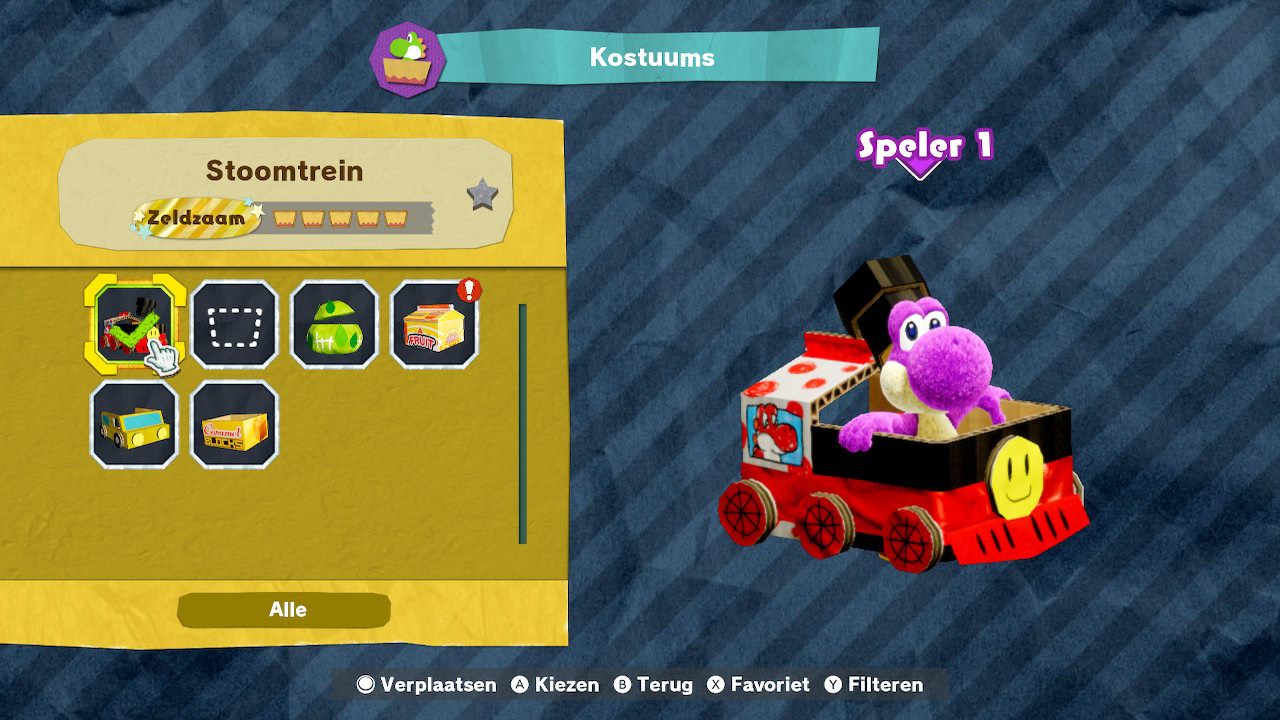 So far the collectibles have been quite standard. They’re all known from previous Yoshi franchises and shouldn’t surprise you in any way. However in Yoshi’s Crafted World there are myriads of ways to obtain collectibles and they’ve added a few more things to collect outside of the items I’ve already mentioned.

Taking all of the above into consideration it makes the replayability of the levels high. Essentially you are sent back to a level multiple times to gather all the collectibles there are to gather. It’s not necessarily needed to complete the game but it adds an extra layer to the simplistic gameplay that is the Yoshi franchise. It also has you actually look at the levels in more detail than you normally would. Lots of things are hidden in the back (or fore) ground and especially Crafts are sometimes hard to spot. It helps you appreciate the amount of detail the developers have put into the game and it also “trains” your brain in a way because you are constantly looking for things.

Graphics and music
As I mentioned before the screenshots don’t really do it justice but the game is gorgeous and top notch as we’ve gotten used to from Nintendo. The colours are vibrant, the structures are pronounced. I can see how the Yoshi’s, who are made of felt, are in stark contrast to the cardboard world. There’s a lot of detail that has gone into each level so it’s a joy to watch and discover everything as you play through. Even the use of focus/blurring is done very well and makes for a natural flow as you move from the front to the back of a level and vice versa.
The music is cheery and simple like in most games. I like playing with the sounds and music on, it doesn’t grate on the ears so far. I’ve only played through four levels though so the music variety hasn’t been super big but so far I’m enjoying it. The sound effects do add this extra touch to the game that I think would be very bland otherwise. Hitting cardboard structures makes cardboard sounds, Yoshi itself sounds very cute and so far the enemy sounds have made sense aswell. It so far has not made me want to turn my sound off so that’s a big win.

Overall first impression
So far I’m quite happy with my purchase. Although the game is on the easy side there’s enough challenge in it to make the purchase worth while as fan of the franchise. The game is beautiful and vibrant and lifts your spirits as you play through it. The replayability of the levels is high due to the massive amount of collectibles that are present in the game. It’s the perfect game to relax to for an hour or two after work ór when you’re feeling a bit glum and need cheering up.
Is it innovative? Yes in some ways and no in others. Did Nintendo lift the franchise to a new level? Maybe, I think it’s on the same level as Yoshi’s Woolly World when it comes to visuals and gameplay even though they’ve put in some interesting gimmicks in this one and added even more reasons to replay levels.

Would I recommend this game? If you want a relaxing experience and if you think hunting for collectibles is more fun than challenging levels this is the game for you. I fear however that the game is “too easy” for the more veteran gamers who will be done with most of it in a very small timeframe. This is a game you don’t want to rush but that you want to enjoy and take your time on. For a Yoshi game it’s an excellent entry in the franchise and a day one/week one pick up for fans. If you’re on the fence about this game however I’d advise you to wait untill it eventually will be discounted and pick it up then.