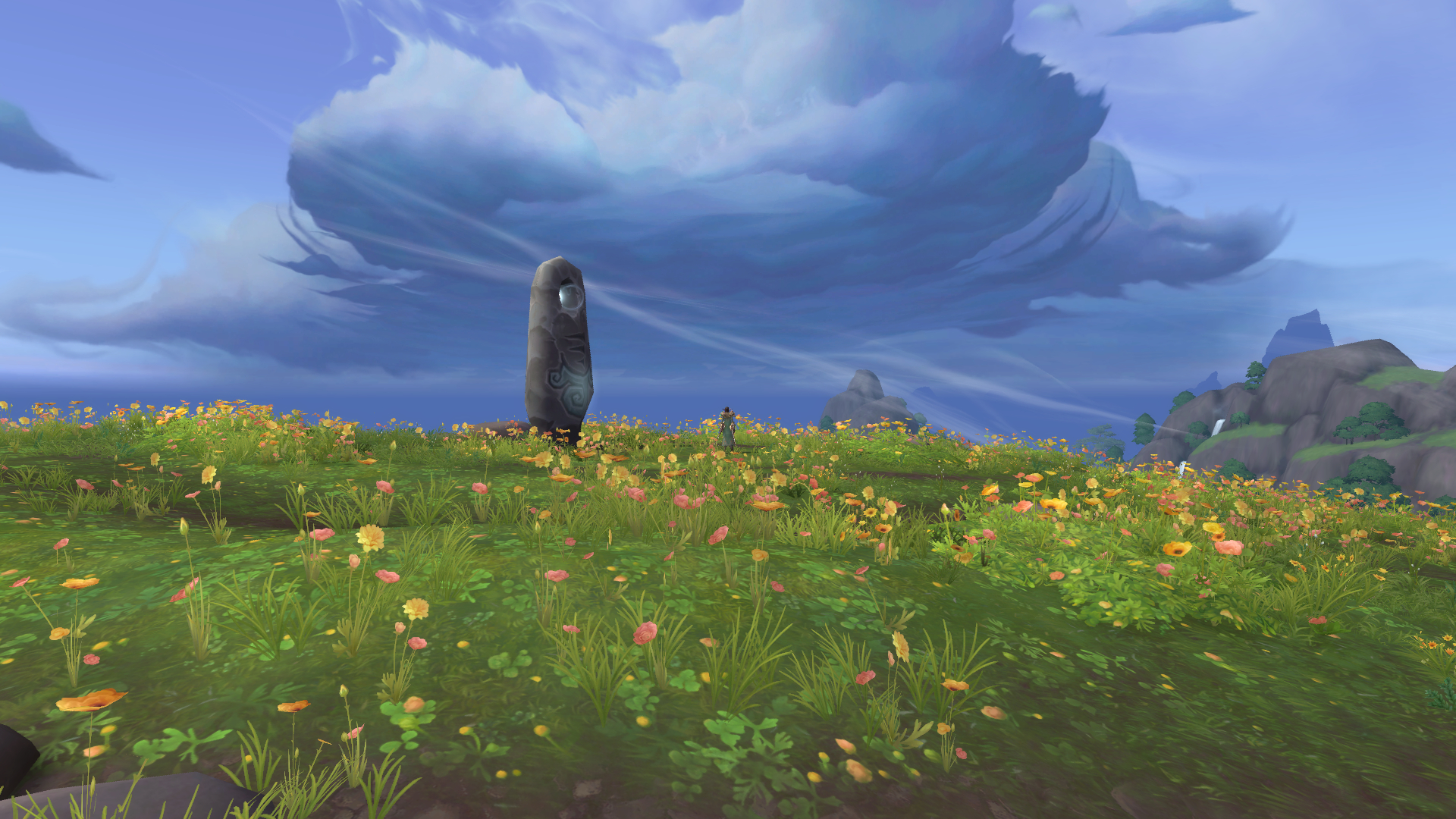 In my search of all the hidden treasures in Stormsong Valley I landed at this specific mountaintop and was instantly enamoured with the view from here. The skies in Stormsong Valley often remind me of the skies here at home in the Netherlands with awesome and sometimes terrifying cloud formations. World of Warcraft may be more cartoony than some of it’s counterparts, especially Final Fantasy XIV which has the slick Japanese polish, but sometimes I shoot pictures like this and I’m reminded that even with all it’s flaws it still is at times a gorgeous game. My Rogue looking at the clouds in the distance just kind of finishes this picture for me aswell.

I’ve settled on a nice groove when it comes to gaming right now. Putting Classic aside and all the frustrations that came with it has been a good choice. Instead I’m focusing on WoW Retail and FFXIV again and have been able to fit in a tiny bit of Guild Wars 2. Especially Retail has gotten some love from me over the past few days. I’ve been doing a bunch of World Quests, taking full advantage of the reputation buff that is going on right now. I’m also chasing some achievements again, most notably killing all rares and finding all treasures in given zones. Unfortunately I had to find out the hard way that the final rare that I need in Stormsong Valley is tied to a world quest that has a very low chance of showing up on the map. Nonetheless I want to log in on the daily to see if it’s up so I can finally complete this achievement. After that I will turn my attention to Drustvar and Tiragarde Sound and with some outside help from WoWhead will probably tackle finding all the hidden treasures there.

Next to grinding World Quests I’m also slowly trying to empty out my regular questlog. I finally started the 8.1.5 War Campaign questline, the one where (spoilers!) Jaina gets her brother delivered back to her by Baine. I’ve just gotten past the cutscene and as always it’s superbly done by Blizzard. I also managed to stumble upon the Xal’Atath questchain on accident and am running around trying to complete that aswell. Because obviously the best idea ever is to give a mysterious whispering dagger surrounded by void energies what it wants… Right? Especially since it manifests itself after you feed it a Void Stone as one of the first steps of the questchain.. Creepy stuff. 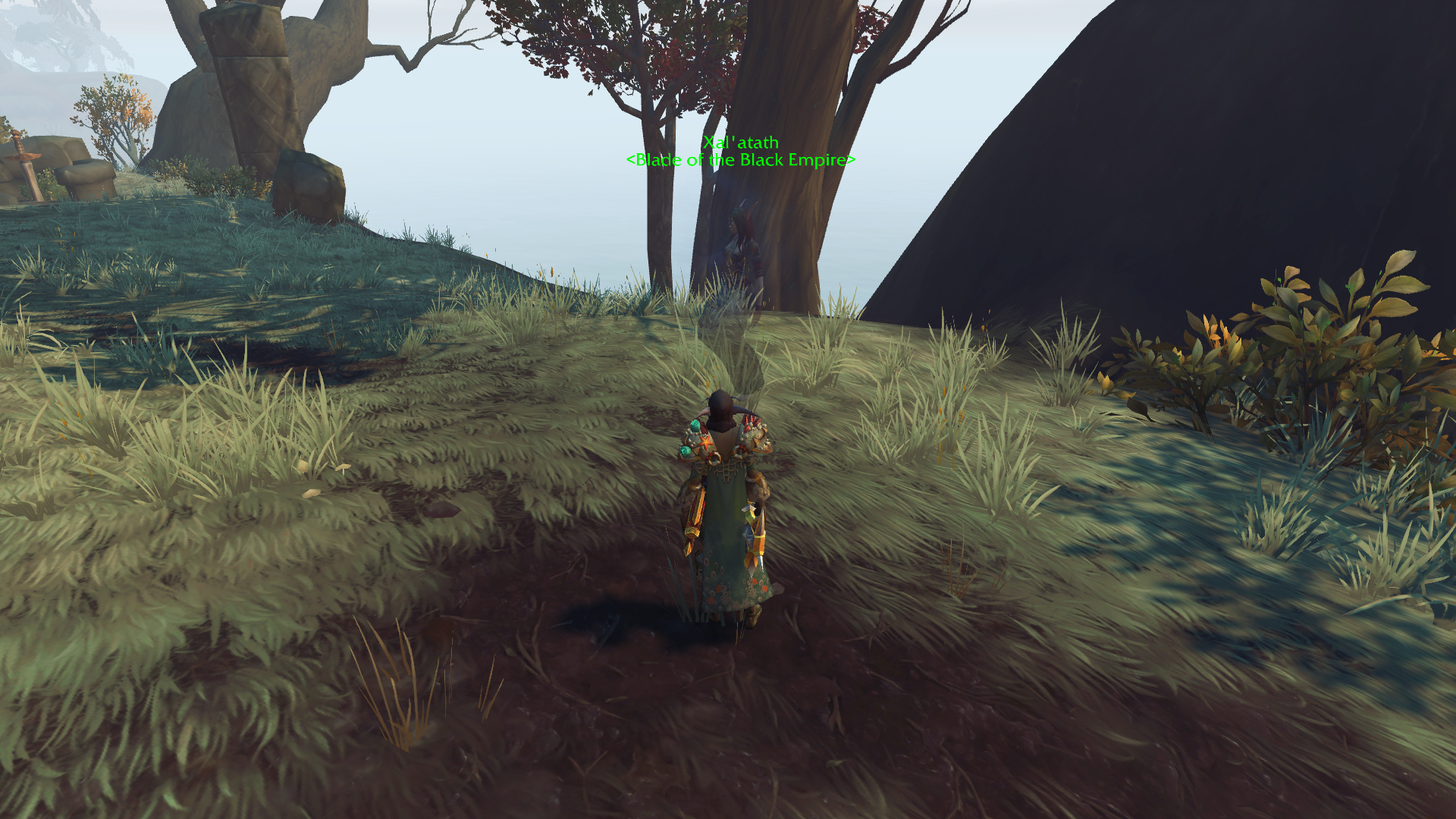 Coming back into Retail WoW and being able to pick up undiscovered lore and clear out quests is exaclty what I needed. I know that the storytelling isn’t as great as FFXIV and their mainstory but Blizzard has tried this expansion to tie things together a bit more. The War Campaign, even if not always high quality, has been a nice consistent line of story throughout Battle for Azeroth. When I leveled up during launch I also remarked that the zone stories themselves, especially Drustvar on Alliance side, were extremely well done aswell. Mechagon and Nazjatar may be a tad below that experience but still have interesting stories in their own right. I just have to tie everything together more by actually doing all the raids that I’ve missed out on. Maybe I will set aside a night or two for that the coming week, starting with the Battle of Dazar’Alor and working my way from that.

Another interesting addition they made are the changes to the Heart of Azeroth. With opening up skill slots and tying some questchains to that I already feel much more involved in the system and leveling up my necklace than before. For instance yesterday I did the quest to level up one of the skills you can slot into the necklace and it sent me back to Val’Sharah and the Emerald Dream to aid the Green Dragonflight. I still remember how much of an impact that cutscene of Ysera dying in Legion had on me and to be back and see the rest of her brood being shattered struck a nerve. The quest itself was short and maybe not that interesting except for the dialogue referring to Ysera. It took me about 15 minutes to complete and I had a nice upgrade and a bit of lore expansion after that. It’s little things like these that make me so fond of WoW as a whole and I can’t wait to discover more quests tied to the necklace. Even though I already know that everything has been one big manipulation show and in essence we are exactly doing what Azshara wants. Oh well. For now I’m mostly just playing catch up to various quest chains and raids and who knows. Maybe I will even dip into doing some Mythic dungeons again.

1 thought on “My Groove”