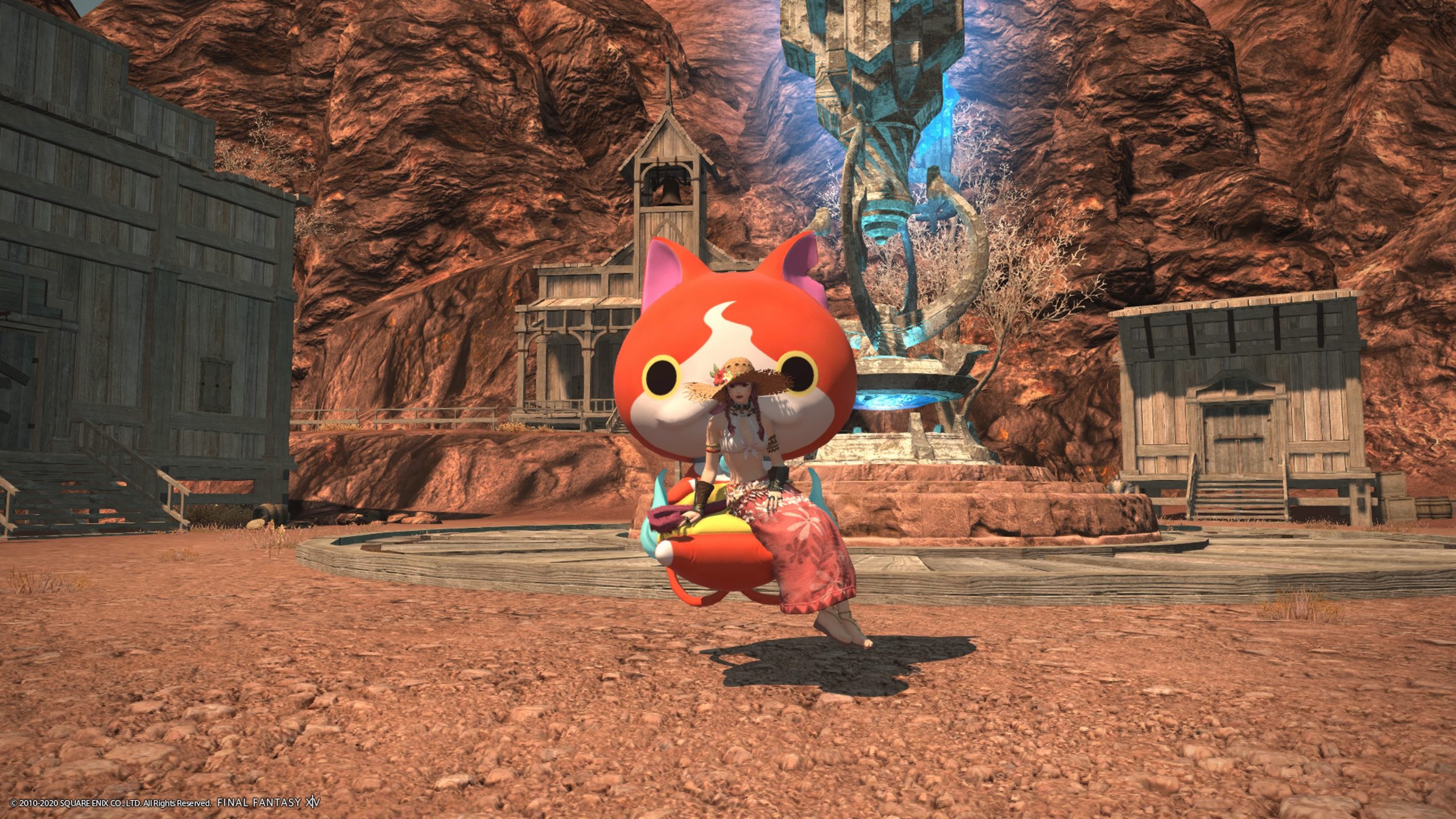 Whew. A lot of stuff has happened over in MMO country the past few weeks. The new MMO from Amazon is being tested as we speak but for me the focus always lies on my main two MMO’s, so those are the only things I’ll focus on in my blog posts. I mean, I can’t write about something I have no interest in, right?
We have gotten a release date for Shadowlands in World of Warcraft, October 27th. Final Fantasy XIV had patch 5.3 drop, aswell as the Moonfire Faire and Rising events and the Yo-Kai watch event renewed.
Since I’m more or less on a break from WoW, after basically gaining all the stuff I wanted to before pre-patch would hit, I’ve gone straight back to playing a lot of FFXIV. It also helps that my WoW guildies have more or less moved there aswell for the time being so I have more people to play with again but I’ve always kept up with FFXIV on the side, especially when the newest patch would hit. So this was no different with 5.3

First thing’s first: I finished the 5.3 mainstory. I’m not going to spoil anything about it here because I would hate to get spoiled myself so I won’t do it unto others. The only thing I have to say, once again, is damn you Square Enix for getting me to care about this world and the characters inhabiting it. On more than one occassion FFXIV has managed to make me cry and the latest patch has not been an exception to that. What kind of tears they were I’ll leave up to you to find out yourselves if you play the game and have yet to go through this part of the story.
Next to the mainstory there were a plethora of other things to unlock, with the most important for me the new “beast tribe” in the form of the Dwarves. It feels kind of weird to see them as beast tribe since they are basically the mirror race of Lalafells but in a way it makes sense. I’m in love with the music that plays in their little area in Lakeland and I can’t wait to unlock the mount you get from them: an actual battle tank. It’s also helping me to level up my crafting jobs since I bounced kind of hard off of the whole Ishgard restoration. I’m not sure why but I just really didn’t enjoy it. Maybe I’ll get into it again at some point but for now I’m happy to level up my crafters with these dailies and so far it has gotten my Carpenter to level 80 and my Weaver to level 75.
I have yet to unlock the new 24 man raid, Puppet’s Bunker, but I’m sure I’ll get around to doing that next week.

As mentioned there were also a few events going the past few weeks and I’ve partaken in all of them. The Moonfire Faire has gotten me a lovely outfit, as seen in the screenshot above. The Rising gave us the Wind-up Ardbert and the Yo-Kai event came back with a vengeance with new minions and weapons to get for the classes added in Stormblood and Heavensward and, after getting all of those, a new mount also pictured above. I decided to try and get this done as soon as I possibly could seeing as the first two weeks of an event like this the FATE farm trains are going strong and the longer you wait the bigger the chance that it comes down to having to solo the lot which isn’t something I would recommend.
It’s really nice just getting these things done, especially events like the Rising that come with a message from the development team every year. For now though I will have to wait untill the next event which will probably be in October around Halloween. 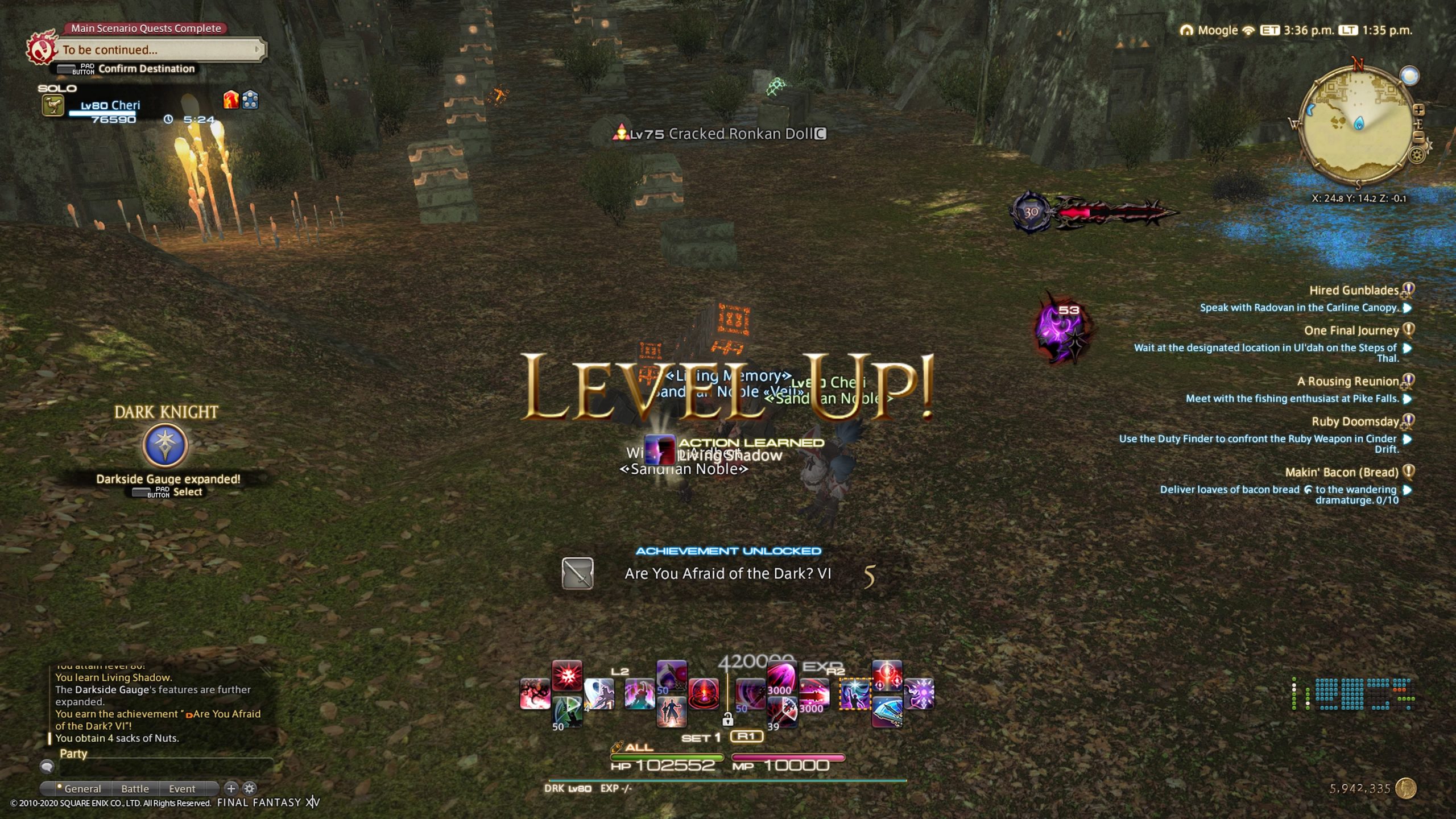 Next to doing the new 5.3 content and the various events I also doubled down on leveling up the last remaining battle jobs I have left. As of this morning I managed to ding level 80 on my Dark Knight, as pictured above, and now I only have Gunbreaker left. I unlocked the job and did the level 60 beast tribe dailies aswell as the level 60 job quest so far. I have to get used to Gunbreaker a lot after playing Dark Knight. There’s more buttons to press for damage since you basically have two single target and one AoE rotation with their respective cooldowns. Then there’s the whole ammo mechanic that I’m still learning but all in all I can see how people like this class and I can’t wait to get it to level 80 and finally get that coveted Amaro mount afterwards. If I keep on playing FFXIV like I’ve been doing for the past weeks I won’t have any doubts that I will get to that level 80 within the next two weeks.

Together with getting level 80 on my Dark Knight I also finished off the final 15 FATEs that I needed in the Tempest to hit rank 3 FATEs with all the zones. I now have access to all rank 3 vendors in the zones aswell as the special vendor in the Crystarium. I see that they sell a lot of stuff that I still want and for that I will need to farm more FATEs, but for now I’m content with not doing any untill my Gunbreaker gets into Shadowbringers content. It’s been quite a dull grind and I’m happy that I was able to complete it. Another notch on my belt so to speak.

Other content consumption
Next to dedicating a lot of time to FFXIV I’ve also been busy with consuming other types of content.
Lucifer dropped the first part of season five last week and I’ve been slowly going through that. I only have about two episodes to go now untill the mid season break and there have been a few interesting plot points so far. Tom Ellis is putting on a top notch performance and I’m happy to see it back on screen and I hope the second half will come out sooner rather than later.
I’ve been reading a lot of Robin Hobb books, that centre around the realm of the Elderlings, the past months and I’m finally down to the last book of the entire series. This means that I’m basically on book 16/16 right now. It’s been quite a ride and honestly the worldbuilding she does is amazing. I really want to know how the series ends but also don’t want it to end at the same time. It’s quite a conondrum. Right now I’m reading 2-4 chapters per day and I’m about 1/3rd of the way into the final book.
Finally my time has been consumed by watching a lot of League of Legends. All of the big regions are in play-off mode right now and I feel like my TV has been on with LoL for the past 48 hours. I’ve been catching games from Europe, North America, China and Korea. It’s a great way to spend time but also nice to have on as “background noise” while doing other things. Next week are the finals everywhere and I can’t wait to see how things play out in both Europe and North America specifically.

All in all I’m pretty happy with the progress I’ve made in FFXIV and I hope I can continue this streak next week. Maybe I’ll hop back into WoW again aswell, even if it’s just to clean out inventories in preparation for the pre-patch and maybe run some old raids now that we’ve not all been scaled down to level 50 yet. I guess we’ll see. For now though the match between Rogue and Mad Lions is only 30 mins away from starting and that will probably keep me occupied untill well in the evening.