Worlds. The biggest tournament in the year for the League of Legends franchise. Every team aspires to qualify for this tournament during the regular season of their respective region. Only 24 tickets to give away. Some regions are more fortunate than others and get more tickets. Some regions will never get past the play in stage or won’t qualify at all. With all World Championships a lot is at stake for the teams. Who will crown themselves king for a year? Which region can “brag” at the end of the day? And for who has all the hard work paid off the most?

I look forward to Worlds every year as an avid LoL fan. I cheer for the European region first and within that my “allegiance” lies with G2 Esports. The League of Legends seasons are long. The year is usually divided up in two splits, Spring and Summer, that start somewhere in February and run all the way up to the end of August. Inbetween splits there usually is a Mid Season Invitational for the top teams of every region to compete against eachother and from the end of September untill the beginning of November the World Championships are held. Then there is All-Stars after that, which is a bit more of a for fun tournament but which nevertheless taxes the players who get nominated to go there. As player there is virtually no time “off”. They are living and breathing League of Legends for most of their teenage years (from 16 or 17) untill their mid twenties. This game isn’t just a game anymore, it’s their job. And where we as normal people can clock out after an 8 hour work day these players can play LoL for up to 14 hours a day honing their skills, playing competitively or just practicing against other teams, something called scrims. It’s a lot to take on when you’re still a child. Because let’s be honest, the players who are new to the Leagues are often in their late teens and in no way adults. I can’t imagine how it must be to lead the “pro” life and I really think that the current generation of players has a much better team surrounding them than say 5-6 years ago. It must be exhausting and stressful having to perform week after week, your whole life revolving around this one single game. To quote G2 Perkz from the G2 documentary “Chasing the Dream” (go watch it, it’s good content!) about how he just wants to feel human again after having to perform for so well for so long strikes me through the heart everytime I hear it. We can’t understand how it is to live that life, and honestly I wouldn’t want to trade.

Which brings me to the actual point of this post. For the past years LoL has been steadily climbing in popularity. Viewership is very high as more and more people tune in to one of the biggest e-sports we have right now. With all the growth and attention there has also been a staggering incline in the amount of toxicity in the community. Not only in the game itself, which is why I rarely play more than their “fun” modes, but also among the fanbase. Like with traditional sports there is always a core of fans that will tear teams down when they perform badly. How many times haven’t we seen here in the EU that people call for a coach or player to be fired or benched in football? The same trend is showing up in e-sports. This is obviously to be expected but what makes this so bad in e-sports are two factors:

– The average player age is much younger than other professional sports. Imagine having to play Champion’s League football full time at 16-17 years old, week after week. You’ve gone from your parents’ house to a player house where all your focus is on you playing the game the best you can. Learning to deal with the outside world isn’t a big thing. These are still kids who are growing and learning and whose brain is still in full development phase. It’s so easy to take everything to heart and to get down and depressed from whatever negative feedback you see online.
– Which brings me to my second point: unlike professional sports teams where individual players don’t interact with their fans through social media platforms, they do in League of Legends. Almost all players have Twitter, Facebook, Instagram and Reddit accounts. Their social media is managed by themselves and it’s a way for them to interact with fans. It also means that they see every single negative comment that is thrown their way, unless they block all social media interaction. It’s one of the things that I personally like about LoL, because the players don’t become these distant unreachable superstars, but it has a definite negative downside. Especially to these young people who just don’t have the mental capacity yet to distinguish the important messages from the noise. 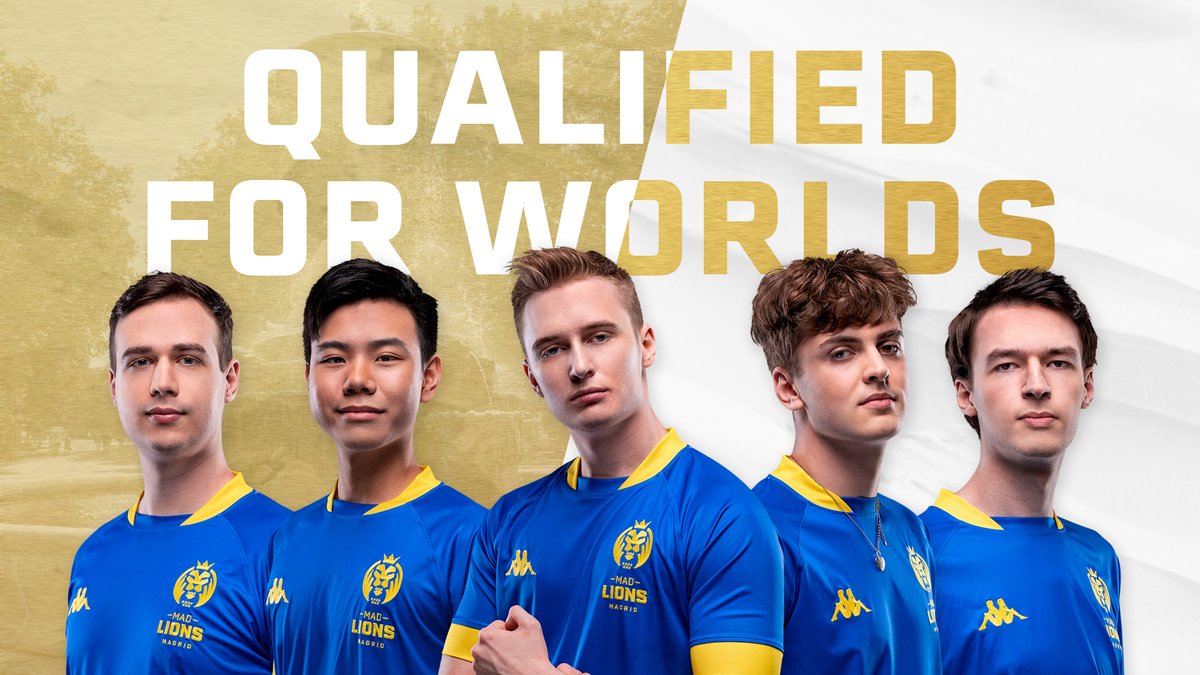 This year we as European region have sent four teams to compete at the World Championships. Three teams advanced to the group stages immediatly but the fourth team has to battle their way through the play-in stage to get there. This team is the one shown above, MAD Lions.
It’s a young team. They have one player who has more than one season of experience of playing in the highest league and the rest are all rookies. This is their first real tournament outside of Europe and I can’t imagine how incredibly happy they must have been that they qualified. Going all the way to Shanghai to compete for the biggest prize after one year of playing isn’t something to take lightly.
They looked incredibly dominating for most of the Summer split, with an unfortunate slump at the end of it during play-offs. Nevertheless they made it and we as Europe have hyped them up a lot, with unwavering confidence that they would make it through play-ins. Maybe it isn’t smart to put such expectations on these players but it has happened and I’m sure it has boosted their confidence. However so far they have been struggling, losing two out of the three games they played. It happens. Life isn’t a fairytale and there can only be one winner or loser. The opponent team was simply better and, of course, they made some mistakes that they could and should learn from. Remember that these are rookies. It’s all new to them and it must be hard to not live up to expectations in the first place.

Yet despite this knowledge people still think it’s okay to absolutely shit on these players and the team over social media. Horrible comments on Twitter aimed at specific players, to the point that other players from other teams speak up on Twitter to tell “fans” to back down. I can’t understand why people would do this. Who in their right minds thinks it’s okay to absolutely tear someone down over a lost game. And remember they’re not tearing down a fully grown adult who doesn’t bat an eye, they’re tearing down what are essentially still children. What is the point of being so toxic on the internet? Do people think it’s okay to talk to people like this in real life aswell? Or is it the relative “anonimity” that the internet provides that makes people think it’s okay to behave like this? Do people have no empathy anymore? Are people incapable of putting themselves in other people’s shoes anymore? Imagine getting torn a new one if you made a mistake at your job to the point that people you’ve never met tell you you should’ve never chosen your career. There is no way that happens. Yet it seems that it’s the norm after every game lost. Fans don’t even enjoy cheering for their teams anymore, instead only focusing on the bad. It’s a toxic cesspool that I wish didn’t exist, but unfortunately it does. And it makes me sad and angry. If you think it’s okay to behave like this, I sincerely suggest that you may want to take a look at your own life and then kindly fuck off.

There are lines and they are being heavily crossed, yet it seems impossible to shut up the toxic underbelly of the internet. I’m afraid that it will eventually lead to a complete social media blackout from all pro players and instead we will go the route of “normal” professional sports where individual voices aren’t heard and everything is heavily moderated for the players, and that they themselves won’t interact with the general public anymore. It would be tragic if that would happen, since I feel it would cost LoL a lot of it’s “charm”. Maybe mandatory social media training should be part of playing for a pro team, but I’m not sure how feasible that idea is at this point and where the focus would need to lie exactly.

For now the only thing we can and must do is speak up against the toxicity and cheer for our teams and hope that in the stream of horrible comments they’re able to pick out the ones that support them no matter what. We are out there, I can only hope they’ll hear us.

1 thought on “Toxic Fans: The Dark Side of E-Sports”