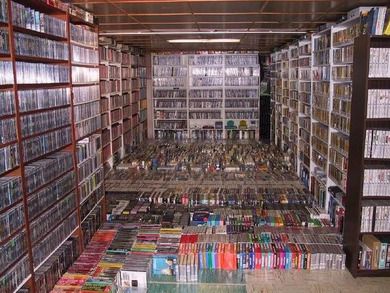 Although I can’t really boast the size of the massive game collection shown in this picture, I have quite an impressive backlog of games of my own. Owning two consoles, a PC and a handheld I have accrued quite some games over the past years and I haven’t played much if at all of any of them. I mentioned it in my previous post that I’m notoriously bad with playing through my games, and I’m really not joking. I’ve actually gotten to the point that I’m now forbidding myself to buy any new game (unless I already have it in pre-order) untill I have finished atleast some others that I have decorating my shelves or my harddisk.
I’m really embarrassed by the awesome game collection I do own and that I can’t really tell anything about most games because I simply haven’t played through them at all. Ofcourse I also own some games that you never really “finish”, mostly being MOBA’s, MMO’S and TGC’s but you can boast about atleast achieving some stuff there by defeating X boss, attaining X rank or even levelling to max level. Especially in MMO’s I see max level as the real big achievement, seeing as I’ve started so many chars in so many different MMO’s and never leveled them past the level 20 or 30 point.

This year I made a gaming goal list, which mostly consists of goals for FFXIV, my main MMO. However I really want to start working through the catalog of games I have lying around, and just so you guys get a glimpse of what this means, I made a list of stuff that I own. Because this post would become a monster if I would list everything in one go, I’m keeping this first post to console and handheld stuff. Part two will be about PC games, MMO’s and other “neverending” games. I also want to take a look back at my older game collection and share with you games that I have owned since my childhood, many of which I have actually finished but keep around for nostalgia sake, so that will be part three.
Let’s start out with…

Playstation 4
My first “next gen” console, decorating my room since 2014. I have about 15 games on that, not really counting the free PS plus indie ones since most of them are garbage that I never download anyway. So let’s take a look shall we?

All in all my Playstation catalog isn’t that horrible. I do consider some games “fiinished” but monsters like the Final Fantasy and Tales games I haven’t really set foot in much. I am slowly working my way through Ratchet and Clank though so that’s a thing. The only game I really regret buying on this list is FIFA 16 since I haven’t even played 10 minutes of it..

Next up: Nintendo! I own both a 3DS and a WiiU now, with the WiiU being very very new. Even so I acquired a lot of games. Splitting them up for the list!

Of the above mentioned games I really only played a bit of Yoshi and Windwaker. As said, the console is brand new so not having played much isn’t that horrible… Right?

So yeah. I have a decent Nintendo backlog, but a lot of these games I have actually played more than I thought. I sunk quite some hours into Pokémon. Pokémon X I have restarted a few times, but with gaining a lot of legendary Pokémon I’m determined to see it through. For the rest I have made decent starts in both Donkey Kong and Super Mario Bros. In both games I have atleast beaten the boss of the first world and in Donkey Kong I’m halfway through the Second World. Off all the games in my backlog I have been actively playing my handheld ones the most, thus the most progress in them.

All in all this part of the list alone contains 38 games, most of which I have barely touched. I really do want to start going through this huge backlog though. It’s so much money invested and so little time gotten out of it. The easiest ones for me will probably the 3DS games since I actually play them a lot on the train. For a game like Mario I manage to do 1-2 levels every train journey, so that’s 2-4 levels per workday. As far as the RPG games go, I defeat a bunch of trainers in Pokémon and make small steps towards my end goal. These bite sized chunks are really nice for me and it also helps with finishing games. I also feel like it’s easier for me to pick up my handheld and just lie down on bed and game a little. I often don’t feel like starting up my consoles or PC to play anything, especially when I’m tired.

So yeah. This was the first of a three part post about my “big” game collection. It’s nice to see it all listed, gives me a nice overview but also shows that I have quite the spending habit. I really wish I could say that I have played through a lot of these games, but the reality is I just really haven’t. And that’s such a shame. I do hope that I can clear out this backlog a bit throughout 2016. If I plan my gametime right, I should be able to do it.