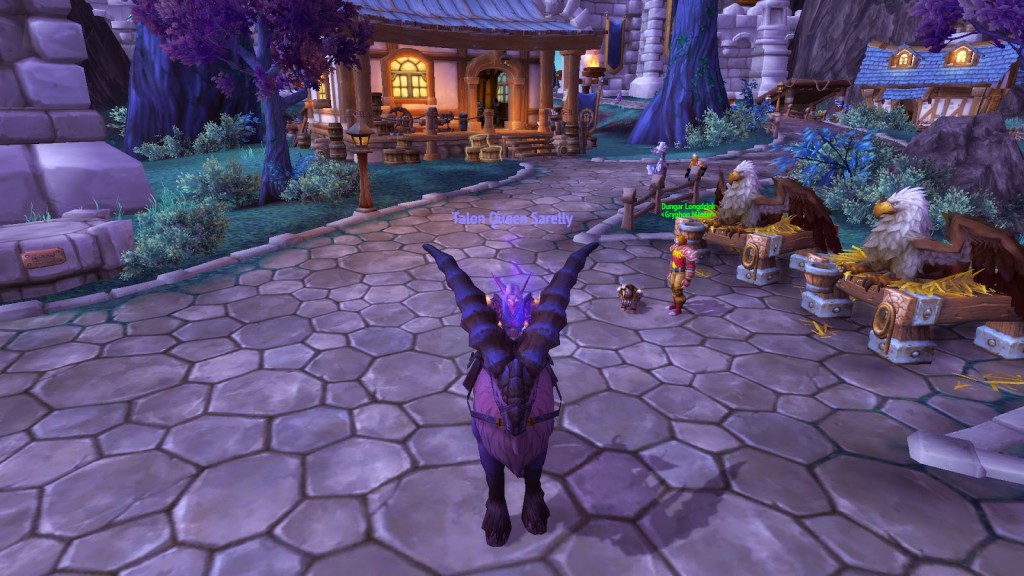 I get to call myself a Queen now. Talon Queen to be more precise. I’ve kicked my own butt and grinded the last 2k rep I needed to get this awesome title and the mount that you can buy once you get exalted with Arakkoa Outcasts. It looks really great and I think it’s actually a bit bigger than the other new model talbuks Blizzard has impletemented in Warlords of Draenor.

I can’t remember the last time I was so happy just farming away on a character. I’ve put more effort in my Priest in this expansion alone than I have in any of my characters in the entirety of Mists of Pandaria and I’m not regretting a single second of it. I feel like I have finally found a character that I can call my “main” and I have little issues only logging on her and playing on her. I wish I would have had this feeling sooner in my career, it would have probably prevented a lot of hurt and frustration on my behalf.
I’ve always been a character hopper although in my early days I only had two max level characters, my Warrior and my Priest and I was happy to switch only between them. Over the past seven years though I don’t think I have ever stuck to a single character for more than a year and it shows. Oh how it shows.

I thought I had found my perfect balance, I would raid on my Priest two times a week and make sure she got her stuff tailored to her. Next to that I levelled and geared my Monk on Horde side, did I mention I was actually planning to roll Monk at the start of MoP? I guess I didn’t, and I would raid on that on Fridays and Sundays.
Life however has a way of fucking you over. Or well not exactly life, games and communities do. Just as I helped set up a new website for my Horde guild so we could start using EPGP as loot our Main Tank, who also happens to be one of our Raid Leaders, let us know that he was accepted as trial into a guild who were having Mythic progress and thus would leave our little guild behind. It was hard news. I still don’t really know what to say, I’m really new to the guild and already have been put in a high ranking position due to me managing the website. A position I didn’t really ask for but have no way of giving up now.
After the tank’s departure the GM of my Horde guild had the brilliant idea to suggest that people would reroll to Alliance side and raid with Aeternus. You see, Aeternus once had plans to try to go for Mythic progress themselves. Unfortunately, due to a combination of average players and casual mindset, this plan was soon turned into “let’s clear Heroic atleast and then we’ll see”.
On it’s own the reroll plan would have been a great idea. However, the two people that were interested in rerolling were a couple that only “wanted to raid together or not at all”. These kind of package deals are a huge red flag to any guild, but especially smaller ones should avoid them. There WILL BE drama if you get people like this in your guild so it’s best to avoid them.
Apart from that, the girl of the couple also plays Shadowpriest and seeing as how Aeternus already has 3 priests (2 heal, 1 dps), 2 mages and a warlock it would be a bit foolish to accept another cloth dps while we are much better off with say a Shaman or a Boomkin. I tried to gently explain this to them, that sorry but for raid diversity and loot distribution another Priest would be a bad idea, but all I got was a bitch response. So to hell with that then. 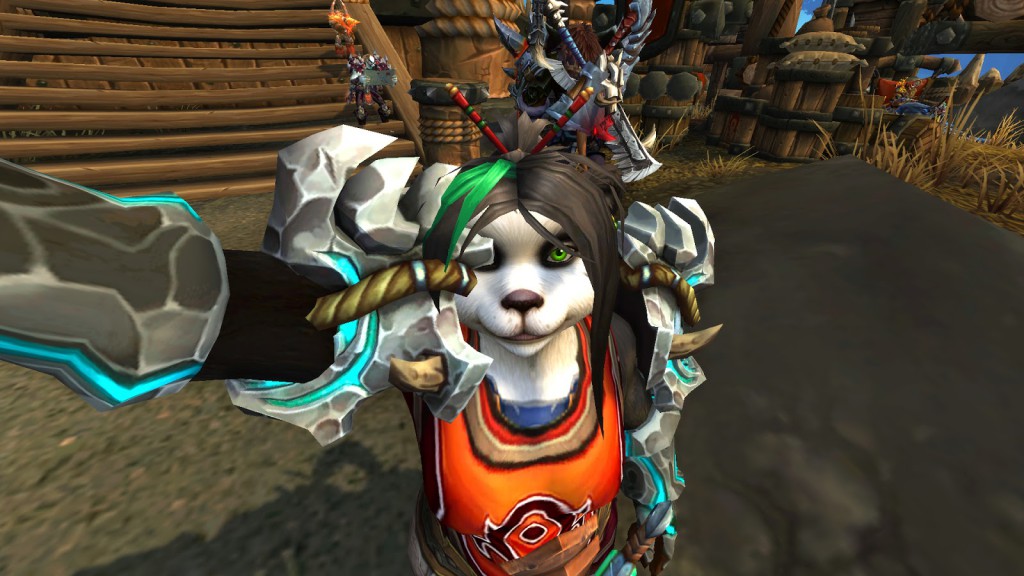 Which leaves me with my now awesomely geared Monk, see above, that is in a guild on the brink of death. Something I have seen happen over and over in my WoW career and something I was hoping to avoid this time, but alas. Logging her leaves a somewhat sour taste in my mouth now since I feel like I belong there even less. I still love playing the class, but I’m not sure if staying in that guild is a good idea for me. For now I’ll stick around, mostly because I’m not a person who flees at the first signs of trouble, but also because I feel like I owe these people atleast for helping me gear up.

Real life hasn’t been treating me much better than the Horde guild. I feel like I’ve taking a lot of steps back after taking atleast as many steps forward. The last week especially has been tiresome. I’m tired a lot and I sleep a lot. I feel like I’m wasting time I should be spending on other stuff but I can’t really help myself at the moment. I’m just too tired.
I still miss one of my best friends. Even though we are somewhat on speaking terms again things aren’t what they used to be. I feel like I have to fight alone a lot and it’s draining me. I try to see friends and go to the gym and keep my social life going but it’s hard. Most of the days I wish I could just crawl into a corner and become invisible for a while, just so I could get some peace of mind.
It doesn’t help that I’ve had a really bad cold over the past few days either, being miserable AND sick is a hellish combination and it’s something I hope I won’t have to deal with for a long time.
Right now I feel like World of Warcraft is the only thing keeping me from lying in bed all day. I guess it’s something atleast. I feel like I can see in my Priest the person I would want to be. Strong, healthy, powerful, pretty. Someone with a Light and a Dark side, in her case quite literally, but who can keep the balance between that and use both sides for my own benefit. 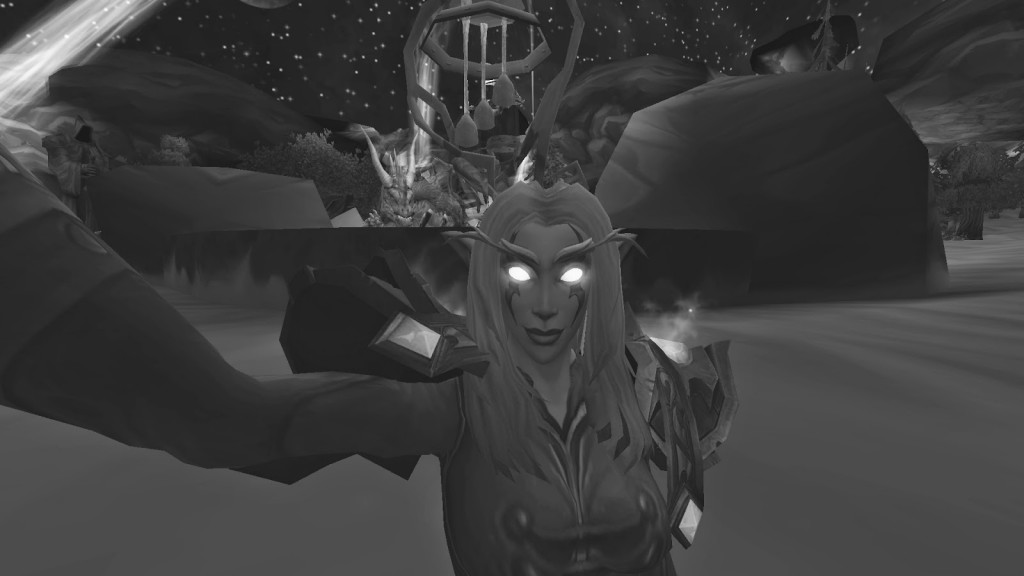 I wish I could take a real selfie, one of the real me, and be as happy with the turnout as I am when taking a selfie of my character. I guess I still have a long way to go…