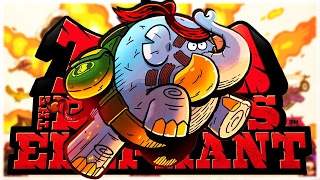 As I got home on Wednesday evening I browsed Steam for a bit. I always check out what games are on offer, even though most of them are really not my thing. Whilst doing this a game with a rather peculiar title caught my eye: Tembo the Badass Elephant. It was on sale for €3,24 and it looked to be some sort of silly platform game. I went to check it out for some fun and giggles, looked at some screenshots, looked at the trailer… And was hooked.
This game essentially brings me back to the 16-bit console days that I experienced as I was growing up. I had a Sega Genesis (called Mega Drive here in Holland) as a child, a present I got for my sixth birthday. My dad has always been a bit of a technology geek and he had seen the rise of video games early on. I’m pretty sure we still have a very old Atari game system in the attic somewhere… My mum wasn’t very much an avid gamer but she liked puzzles and eventually got one of those wannabe Gameboy type things that only had Tetris on it, which she was actually quite addicted too (and quite good at aswell I might add). Anyway, they decided to gift me a Sega which at the time came with the first Sonic the Hedgehog game. I’m not really sure how many hours I spent infront of this console, but it must have been quite a lot. I had a few Sonic games, a ton of Disney games and even a Jurassic Park game. My heart broke when eventually you couldn’t get any new games for the console anymore, even though I’ve only really finished a few of them.
Looking at Tembo, and the developing/production companies (SEGA and Game Freak, yes that company that developed the Pokémon franchise, that Game Freak) I felt like I needed to have this game, even if only it was on sale now so I could get it cheap.
The story of the game is simple. You are a Rambo type military elephant that needs to save Shell City from an organisation called Phantom. You do this in a platform type, sidescrolling game setting where the companies have tried their best to combine a lot of fun 16-bit game mechanics. It has the speed of Sonic, there’s some Donkey Kong and Yoshi’s world elements in it… And it’s just overall seriously hilarious. A level takes about 5-10 minutes to play through, depending on if you just want to finish the level or also want to complete all the objectives for that level. It’s simple fun, the style used in the game itself is very colourful with a lot of comic book elements (see picture below). 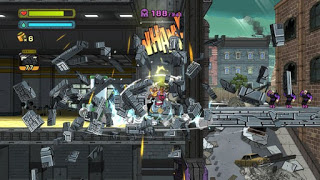 All in all I only have very good things to say about this game, except for the one flaw that is resolutions. In settings you can’t go higher than 1920x1080p, which is fine for me… But for people with higher resolution screens it obviously isn’t. Personally I would recommend just playing windowed, since fullscreen can be a bit buggy when shutting down (ie. I had it crash on me a few times) but if you’re looking for a fun sidescroller with a lot of 16-bit elements, this might just be the game for you.
MMORPG shenanigans
Season 5 of Diablo 3 has started yesterday and for the first time since the first season I’ve immediatly started to play at launch. I rebirthed my existing Monk and am well on my way to 70 already. If I didn’t have to go out today I would’ve been 70 before dinner easily, but alas. My monk is “stuck” on level 61.5 and I’m having a blast so far. You can notice Blizzard overhauled a lot of things with the latest patch and so far I’m having fun playing. 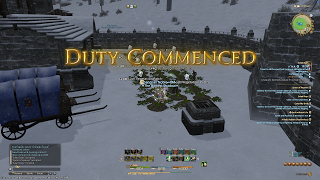 I’ve also been poking about in FFXIV a lot, leveling my Bard, my Astrologian and since Friday my Botanist. Endgame Gathering and Crafting has been the one area in FFXIV I haven’t poked my nose into yet and I really want to with this expansion. Seeing as the only crafter I have on 50 is Weaver… And the mats I need are gathered by Botanists… I figured why not just level that up and start working towards that level 60. So right now I’m doing about an hour or less a day of BTN leveling. It’s quite soothing in a way. Doing levequests to just gather things, doing a “get me X materials” quest every 5 levels. It allows me to zone out a bit and still feel useful. I hope I can get my BTN to 50 by the end of this week atleast, but seeing as I’ll be having a lot of free time, that shouldn’t be too big of a deal. Especially considering that my only other goal ingame right now is to finish my Dragoon Zeta. Which shouldn’t take very long either.