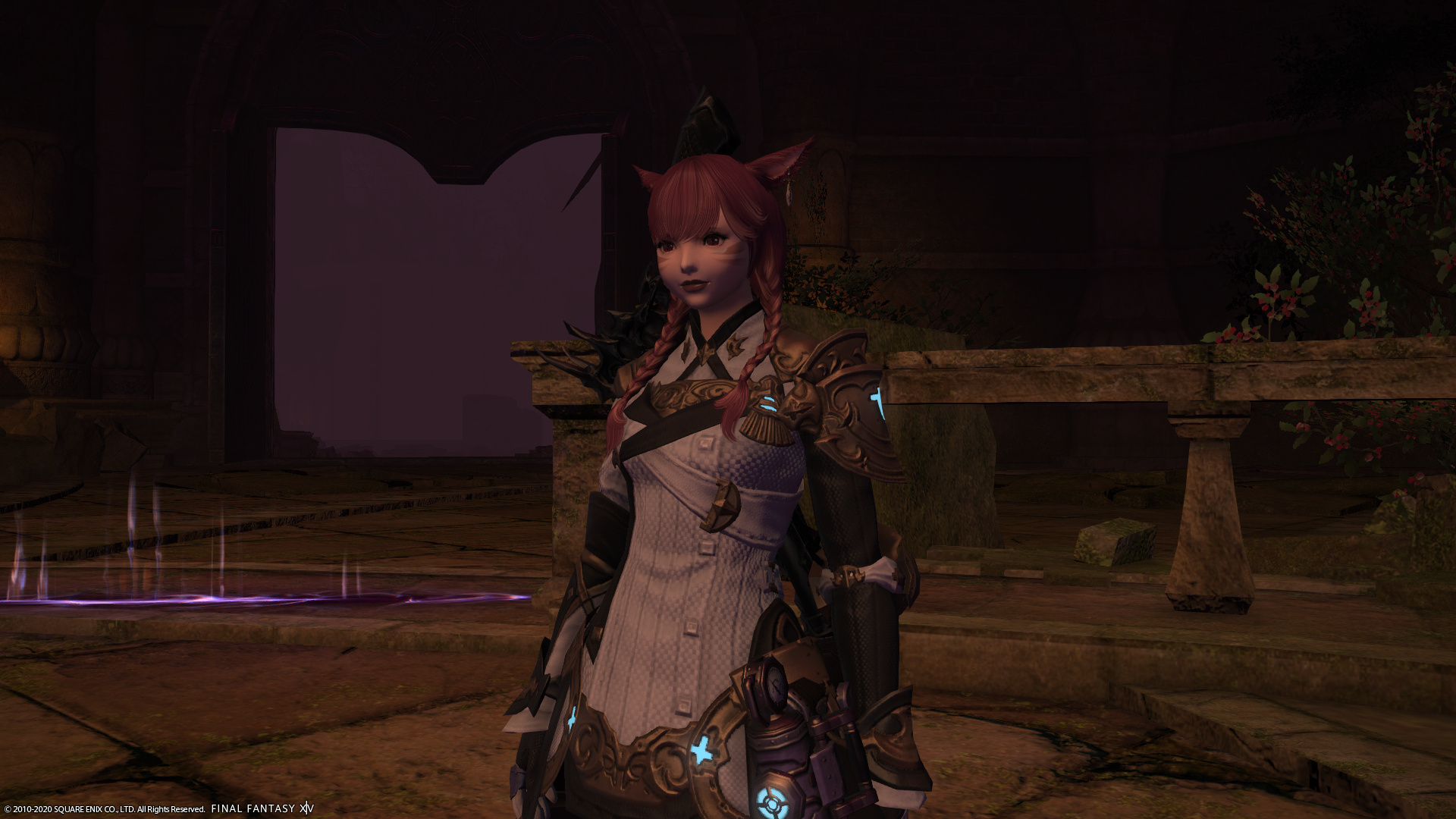 Trying to keep up with multiple games at once can be quite a challenge. Especially when juggling MMO’s. I have the utmost respect for anyone who manages to do more than two at a time since that is my absolute maximum and even then I’m struggling hard to not put too much time into one thing that will take away from something else. MMOs tend to suck you in, especially at endgame level, and then when you look up you realize that you’ve been playing this single thing for the entire day or evening while you wanted to do more or different things instead.
So to combat me spending all my time on a single game I’ve been trying to set up a bit of a schedule when it comes to my playtime and the activities that I do in my games. I have reserved certain days for certain games and I have spread out my gametime a bit more to include the morning before I start working and my lunchbreak somewhere in the middle of the day. This is also helping me to kind of not go insane with working from home all the time so that’s another plus!

This gives me one night specifically for FFXIV and two nights specifically for WoW during the week. It helps me structure my weekdays, since I have things to look forward to, and it helps me get the more grindy daily stuff out of the way earlier on the day, freeing my nights up for other activities in both my MMO’s. In theory atleast. In reality I’m spending almost every waking minute on WoW playing catch up on my Warrior because there is just so. much. to. do.
Right. I hope that will slowly settle down and that I can actually incorporate some of my single player games into the weeknights instead of keeping those for the weekends.

As for the weekends.. I’m trying to figure out a schedule for that. I’m still reserving my mornings to get dailies done, only this time I do both FFXIV and WoW. After that it’s a random free for all to be honest. Seeing as the weekends are (normally) for socializing and doing chores, playing games kind of takes a second seat here to everything else. I do try to reserve a few hours per weekend to work away on whatever single player game has my fancy at the time so that I don’t forget where or what I was doing and, more importantly, actually finish damn games instead of throwing them on my anxiety inducing backlog pile.

So roughly the schedule for my weekends looks like this:

So yeah. It has some rough edges and I’m sure that my schedule will change over time I’m pretty happy with what I’m doing right now. Of course there is always room for improvement and of course some things that take up a lot of time right now will probably stop taking up that time after certain grinds come to an end.

How do you handle playing multiple games? Do you schedule them or does it come more natural? Let me know!

After a crazy week last week, I’m trying to settle down in my normal work routine. I don’t have that much IRL appointments coming up so I can start putting some more time into games again.
I am hitting a wall in the sense that first off I really need to unlearn the habit  of lying on bed after dinner. I often fall asleep for an hour or two, causing me to wake up groggy and deciding to either go to bed completely at a very early hour or it makes me awake for the rest of the night which causes me to have issues falling asleep later on. I also feel like I’m wasting my evenings doing this and I have so much to do in so many games that I don’t want to feel like I’m wasting even a minute of my time. 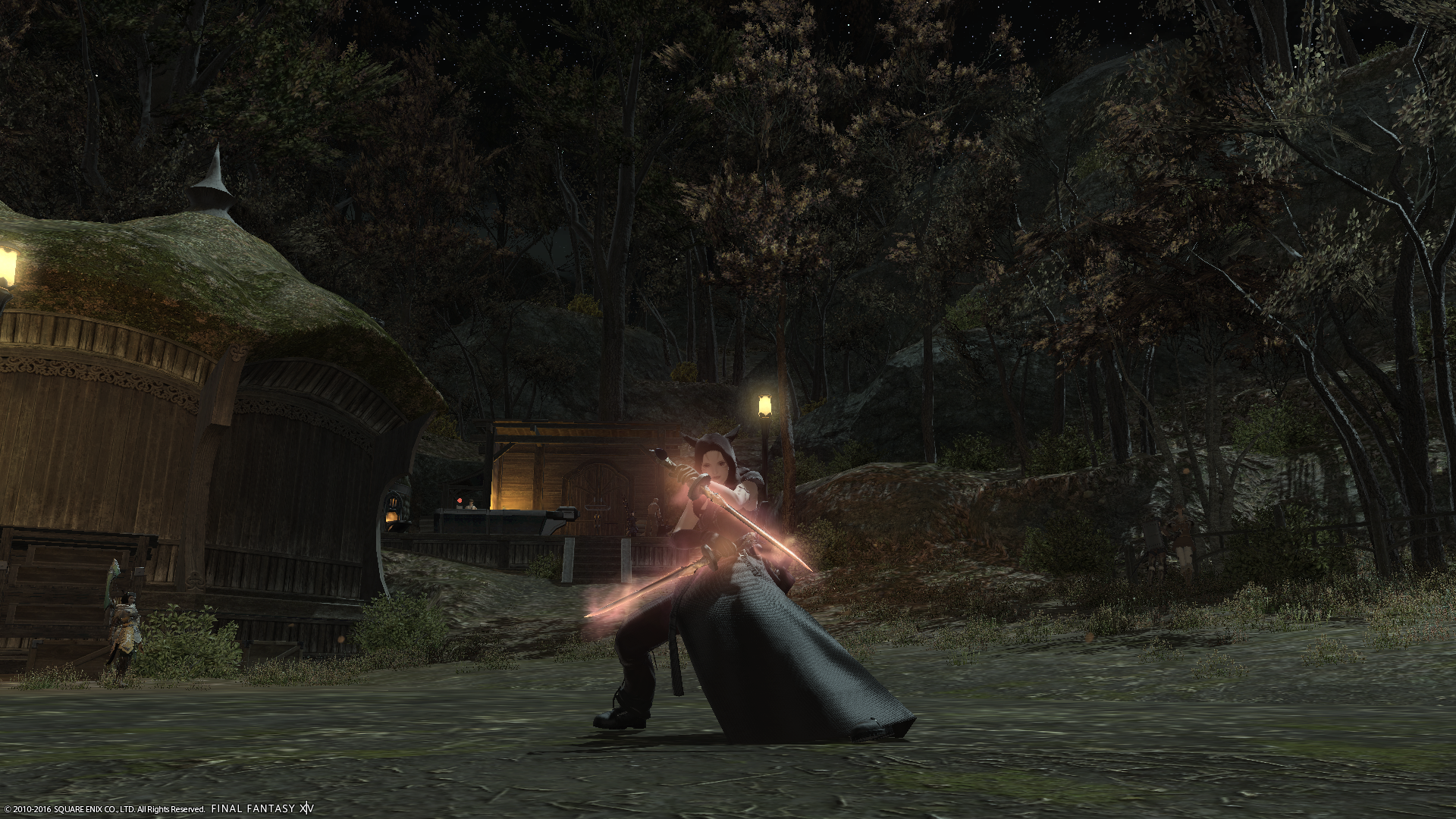 Last weekend I’ve been mostly consumed with playing FFXIV. I pushed through my Ninja 2.0 relic quests and obtained the Yoshimitsu Zenith in about two hours of work. Immediatly after I picked up the White Mage quest for Thyrus, which I plan to complete today. It’s really not that much work to do and it gives me a sense of completion, so I’m happily ploughing away at the quests again. It also helps there’s an achievement for getting all the relics done, and seeing as I’m a completionist… It’s right up my alley.

Next to doing the old relics I’ve been doing some work on the new relics too. I’ve tried my best to do my beast tribe dailies every day, which makes me able to obtain a few more of the items I need today. I tend to skip FATE dailies though because either they aren’t up or people do them so fast I can’t even participate to get the item I need. The “spare” quests this leaves me with I’m using to level to the last rank I need with the Ixali… Which in turn benefits my crafter levelling. It’s a nice routine that I’m easily able to keep up after work. Doing all the beast tribe dailies takes me about 1-1.5 hours, it’s relaxing and rewarding and it doesn’t involve me having to wait in queues for god knows how long. 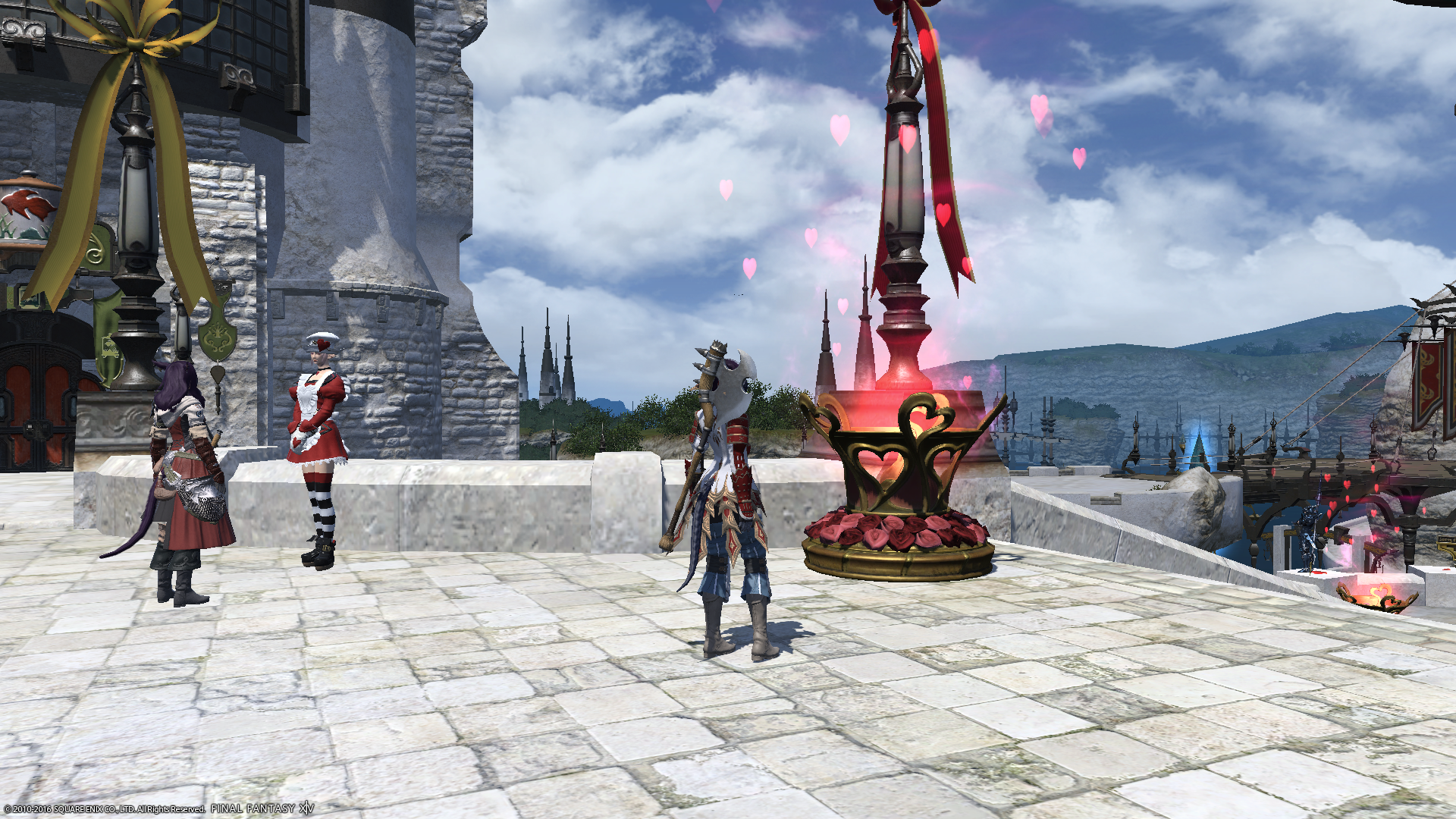 Events Everywhere
It’s that time of year when most games turn their attention to Valentine’s day, and the Valentione Event has come around on Eorzea again aswell. I don’t remember previous years, but this year requires you to party up with someone to complete the quests, which is both fun and mildly frustrating. On Moogle I have a friend I can party up with to do the quests, on Cactuar however not so much… And I want to complete the event on both my characters. I could probably make a Party Finder party for it and complete it that way, but I’ll see what I do over the course of today or maybe the weekend.
I decided that the best times for me to do these events, or anything not daily related, on any of my games is during the days I have off. Then I don’t have to rush stuff and can focus on one thing at a time without feeling so tired. I hope to atleast finish the Valentione event on Moogle today, as I do like the rewards that are obtainable.

On another Isle in MMO land, Blizzard has released the Lunar event for Heroes of the Storm this year. It comes with being able to obtain a special ingame portrait and a 50% chance to spawn an Elder Monkey every game, that drops an envelope with 100 gold if you kill it. It’s a nice little way to get an extra 100 gold every day and I’m always a sucker for obtaining new portraits, so I’m definately partaking in the event this year.  Coinciding with the Lunar Festival, Blizzard has introduced a new hero: Li Ming the Wizard from Diablo 3. She came with an awesome skin/mount bundle… And I caved and bought it. 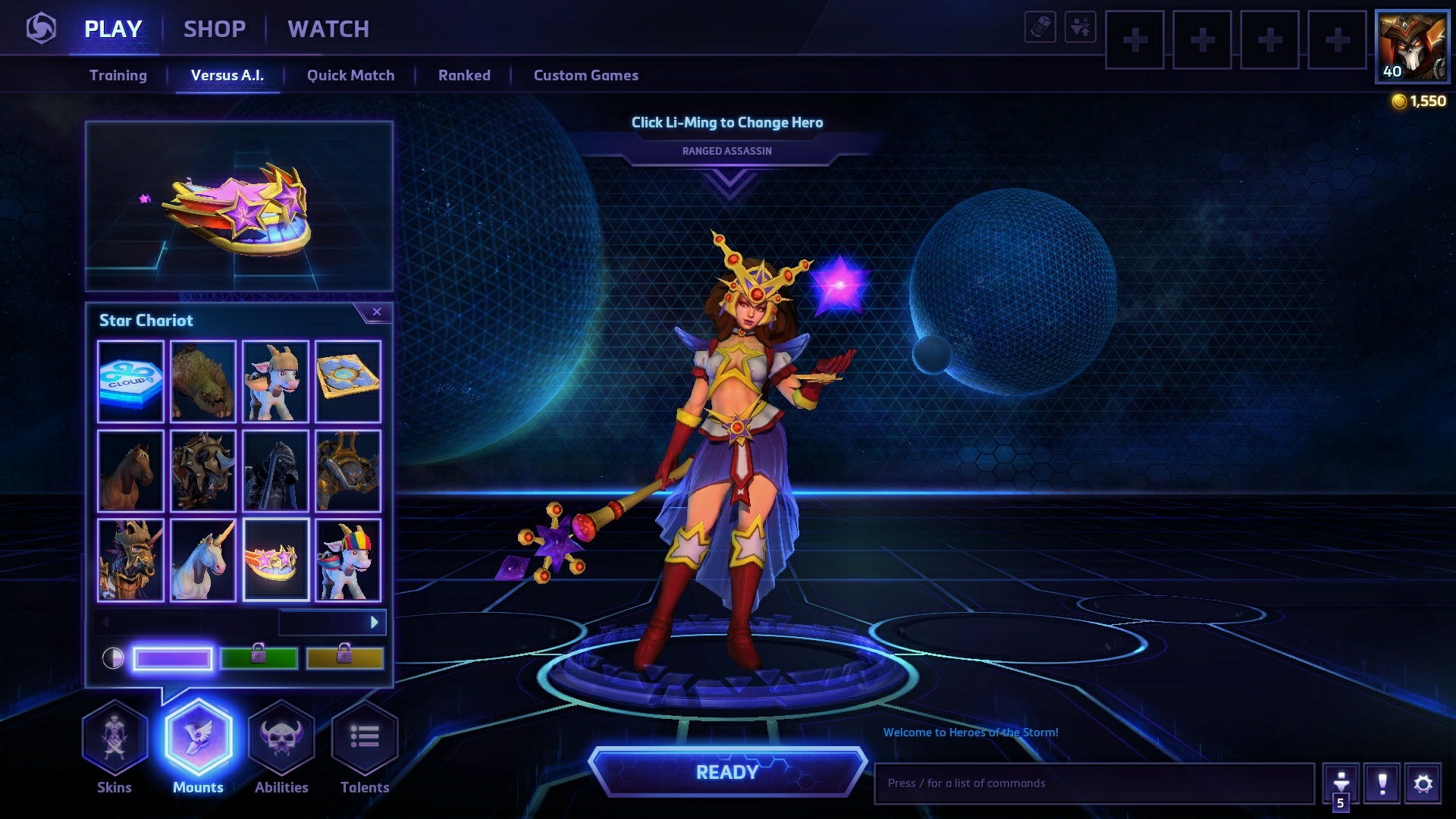 I tried her out a bit last night and my god is she fun to play. Her gameplay reminds me a bit of Lux in League of Legends. She has a talent that makes it so that one of her damaging spells “marks” people for extra damage. Like Lux’ passive. And would you look at the amazing skin? I literally get to play as Sailor moon. I love it so damn much and she’s so much fun to play that I see myself spending more time in Heroes of the Storm than I have been spending for a long time.

World of Warcraft will swing around with their usual Lunar and Valentine’s event. I don’t think they added anything or much new to these, so not going to discuss that in detail. What I do however want to bring up quickly is the recent Hearthstone changes that have been announced by Blizzard.
Personally I can see the pro’s and con’s of Standard Mode. For someone like me, who has been playing catch-up since last year, it’s nice to be able to “skip” the old adventures now. I don’t have any of the OP cards like Dr. Boom anyway so I really don’t care that much that they are leaving them out. On the other hand I can empathize with the people who feel like they are pulled out of their niche decks and that they will become impossible to play, even in Wild Mode. Assuming Blizzard will no longer balance the old cards with the new, it feels like a lot of people will have invalidated collections which they may have paid a lot of money for. And it sucks for them. I guess we’ll see how it works out when it actually goes live. For now I’m still truding through the Adventures, purely for completionist purposes.